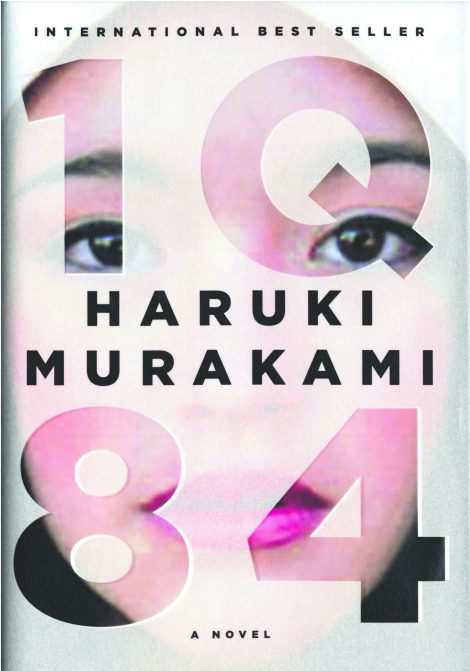 A young woman named Aomame follows a taxi driver’s enigmatic suggestion and begins to notice puzzling discrepancies in the world around her. She has entered, she realizes, a parallel existence, which she calls 1Q84 —”Q is for ‘question mark.’ A world that bears a question.” Meanwhile, an aspiring writer named Tengo takes on a suspect ghostwriting project. He becomes so wrapped up with the work and its unusual author that, soon, his previously placid life begins to come unraveled.

As Aomame’s and Tengo’s narratives converge over the course of this single year,

A young woman named Aomame follows a taxi driver’s enigmatic suggestion and begins to notice puzzling discrepancies in the world around her. She has entered, she realizes, a parallel existence, which she calls 1Q84 —”Q is for ‘question mark.’ A world that bears a question.” Meanwhile, an aspiring writer named Tengo takes on a suspect ghostwriting project. He becomes so wrapped up with the work and its unusual author that, soon, his previously placid life begins to come unraveled.

As Aomame’s and Tengo’s narratives converge over the course of this single year, we learn of the profound and tangled connections that bind them ever closer: a beautiful, dyslexic teenage girl with a unique vision; a mysterious religious cult that instigated a shoot-out with the metropolitan police; a reclusive, wealthy dowager who runs a shelter for abused women; a hideously ugly private investigator; a mild-mannered yet ruthlessly efficient bodyguard; and a peculiarly insistent television-fee collector.

A love story, a mystery, a fantasy, a novel of self-discovery, a dystopia to rival George Orwell’s—1Q84 is Haruki Murakami’s most ambitious undertaking yet: an instant best seller in his native Japan, and a tremendous feat of imagination from one of our most revered contemporary writers.

Haruki Murakami was born in Kyoto in 1949 and now lives near Tokyo. His work has been translated into forty-two languages. The most recent of his many honors is the Franz Kafka Prize.

“Murakami is like a magician who explains what he’s doing as he performs the trick and still makes you believe he has supernatural powers . . . But while anyone can tell a story that resembles a dream, it’s the rare artist, like this one, who can make us feel that we are dreaming it ourselves.”—The New York Times Book Review

1. 1Q84 is a vast and intricate novel. What are the pleasures of reading such a long work, of staying with the same characters over such a long period of time?

2. Murakami has said he is a fan of the mystery writer Elmore Leonard. What elements of the mystery genre does 1Q84 employ? How does Murakami keep readers guessing about what will happen next? What are some of the book’s most surprising moments?

3. Why would Murakami choose to set his story in 1984, the year that would serve as the title for George Orwell’s famous novel about the dangers of Big Brother?

4. The taxi driver in Chapter 1 warns Aomame that things are not what they seem, but he also tells her: “Don’t let appearances fool you. There’s always only one reality” (p. 9). Does this statement hold true throughout the novel? Is there only one reality, despite what appears to be a second reality that Aomame and Tengo enter?

5. Aomame tells Ayumi: “We think we’re choosing things for ourselves, but in fact we may not be choosing anything. It could be that everything’s decided in advance and we pretend we’re making choices. Free will may be an illusion” (p. 192). Do the events in the novel seem fated or do the characters have free will?

6. When Tamaru bids goodbye to Aomame, he says: “If you do go somewhere far away and I never see you again, I know I’ll feel a little sad. You’re a rare sort of character, a type I’ve seldom come across before” (p. 885). What type of person is Aomame? What qualities make her extraordinary?

7. The dowager insists, and Aomame agrees, that the killing they do is completely justified, that the men whom they kill deserve to die, that the legal system can’t touch them, and that more women will be victims if these men aren’t stopped. Is it true that Aomame and the dowager have done nothing wrong? Or are they simply rationalizing their anger and the desire for vengeance that arises from their own personal histories?

8. Tengo realizes that rewriting Air Chrysalis is highly unethical and that Komatsu is asking him to participate in a scam that will very likely cause them both a great deal of trouble. Why does he agree to do it?

9. How does rewriting Air Chrysalis change Tengo as a writer? How does it affect the course of his life?

10. How do the events that occur on the night of the huge thunderstorm alter the fates of Aomame, Tengo, Fuka-Eri, and the dowager? Why do Aomame and the dowager let go of their anger after the storm?

11. At first, Ushikawa is a creepy, totally unlikable character. How does Murakami make him more sympathetic as the novel progresses? How do you respond to his death?

12. Near the end of the novel, Aomame declares: “From now on, things will be different. Nobody else’s will is going to control me anymore. From now on, I’m going to do things based on one principle alone: my own will” (p. 885). How does Aomame arrive at such a firm resolve? In what ways is the novel about overcoming the feeling of powerlessness that at various times paralyzes Aomame, Ayumi, Tengo, Fuka-Eri, and all the women who are abused by their husbands? What enables Aomame to come into her own power?

14. What is the appeal of the fantastic elements in the novel—the little people, maza and dohta, the air chrysalis, two moons in the sky, alternate worlds, etc.? What do they add to the story? In what ways does the novel question the nature of reality and the boundaries between what is possible and not possible?

15. What makes the love story of Tengo and Aomame so compelling? What obstacles must they overcome to be together? Why was the moment when Aomame grasped Tengo’s hand in grade school so significant?

16. In what ways does 1Q84 question and complicate conventional ideas of authorship? How does it blur the line between fictional reality and ordinary reality?

17. References to the song “Paper Moon” appear several times in the novel. How do those lyrics relate to 1Q84?

18. What role does belief play in the novel? Why does Murakami end the book with the image of Tengo and Aomame gazing at the moon until it becomes “nothing more than a gray paper moon, hanging in the sky” (p. 925)?