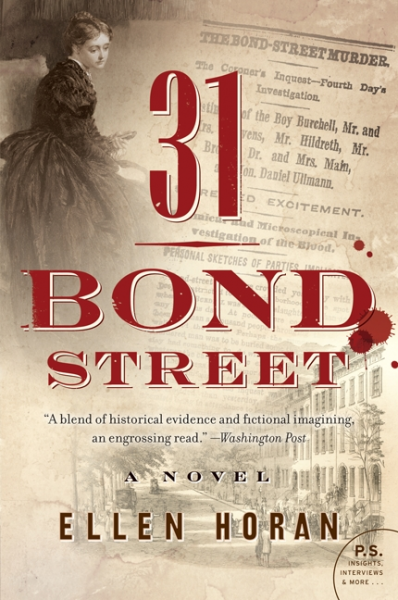 31 Bond Street, an unforgettable literary debut from Ellen Horan, is based on the true story of a brutal murder, a desperate mother and mistress, and the vicious constraints of 19th century society. Fans of Caleb Carr’s The Alienist, Edith Wharton’s The House of Mirth, and John Berendt’s Midnight in the Garden of Good and Evil will love the stunning prose and beautiful imagery of 31 Bond Street.

In the twenty-first century, the moral and legal issues surrounding the Bond Street murder still reverberate within today’s society.

31 Bond Street, an unforgettable literary debut from Ellen Horan, is based on the true story of a brutal murder, a desperate mother and mistress, and the vicious constraints of 19th century society. Fans of Caleb Carr’s The Alienist, Edith Wharton’s The House of Mirth, and John Berendt’s Midnight in the Garden of Good and Evil will love the stunning prose and beautiful imagery of 31 Bond Street.

In the twenty-first century, the moral and legal issues surrounding the Bond Street murder still reverberate within today’s society.

A photo editor for books and magazines, Ellen Horan has worked on staff and in a freelance capacity for many publications, including Vanity Fair, Vogue, House & Garden, Forbes, and ARTnews, as well as for a number of book publishers. 31 Bond Street is her first novel.

“31 BOND STREET is an impressive blend of imagination and history as it vividly brings to life one of New York’s City’s most notorious crimes. Ellen Horan has written a novel that, once begun, will be difficult for any reader to put down.” —Ron Rash, New York Times bestselling author of Serena

“The story is a blend of historical evidence and fictional imagining, an engrossing read that gains much from the author’s historical acuity while making no compromises on narrative pace. Horan writes eloquently of the rapidly expanding city, contrasting the bustle of the downtown streets and the mansion-building frenzy on Fifth Avenue with the orchards and kitchen gardens of Greenwich Village. . . . It’s not easy to breathe life into real-life characters, especially when quoting their words extensively from reported sources, but Cunningham and Clinton live on the page as freshly as if they had stepped, new-minted, from Horan’s vivid imagination.” —Washington Post

“Scandal, social climbing, and corruption in Manhattan during the 1850s come alive in Horan’s historical mystery. . . . Horan’s characters, like Edith Wharton’s, are motivated by social class and survival in a world ruled by wealth and national uncertainty. This unique look at history and the private lives of those affected by it makes for captivating reading.” —Booklist (starred review)

“Ask your local bookseller for a smart, well-crafted and sophisticated story. Then bring home your copy of 31 BOND STREET, a most-satisfying first novel by Ellen Horan. . . . Like E. L. Doctorow and Caleb Carr, Ms. Horan has written a fine, historical novel based on fact. . . . Ms. Horan deserves a following. You won’t regret any time spent in the easy chair reading this book. So, I repeat. Go visit your bookseller. Get 31 BOND STREET. Go now!” —GalleyCat

The book is named after the house at 31 Bond Street. In what way is the story built around this house? This was the era of the townhouse and the importance of its layout and configurations at the time plays a big role in the book. How does the house define the roles of the characters? How important is the layout of the house, the alleys, the privies, back lots, stables, cobblestones, etc.? How does the house evolve and change during the events of the novel?

Varying and Moving Points of view: 31 Bond Street is a unique novel because it has two leads and the plot is told from both points of view: Henry Clinton, who is the defense lawyer in the murder case and Emma Cunningham, the defendant. The scenes go back and forth from the present with flashbacks. How does this create tension? Does the reader benefit from each point of view? Do you find that you were more involved with one part of the story than the other?

Emma Cunningham’s character and the role of women in 19th Century New York: The depiction of gender roles seems to be very different from today. What rights didn’t Emma Cunningham have that women have today? Was she a typical product of her class and education? Is she a sympathetic character? Is her motivation to secure a future for her daughters valid? What would happen if she didn’t find a husband? Could she support herself? What would be her fate? Was she motivated by survival or greed when she tries to make property deals and enter into the male world of financial negotiation? Is she motivated by survival or greed to find marriages for her daughters? How much is her quest a search for love, and how much a quest for survival? How are her daughter’s characters shaped by her decisions? Are women caught in some of the same binds today, or have these dilemnas been entirely eliminated?

The upstairs/downstairs society of the time: Bond Street was considered an upper middle class neighborhood where the hierarchies of the society were firmly entrenched. How did each character fit into this hierarchy? What was the role of the housemistress, which was Emma’s role in Harvey Burdell’s home? How was that different than a servant? In what ways was it a replacement for a ‘wife’, who would normally carry out the role of housemistress in a family? How do the tensions between the servant class and upper class reveal themselves at different stages of the story? How do these class tensions affect Emma’s fate?

This is also a courtroom drama. Original transcripts were used to recreate the courtroom scenes. What techniques were used to interrogate witnesses and keep transcripts? In which way is the tension between the two characters, Henry Clinton and Abraham Oakey Hall, central to the story? In which ways do these men use the courtroom to advance their own ambitions? How important are the speeches made by the lawyers in the courtroom in influencing the jury? How do they affect the reader? How do they reveal the prejudices of the time? What other strategies or testimonies were effective in influencing the jurymen or the reader, as the trial leads to a verdict.

But at the same time it is a realistic crime novel that illuminates the way crimes were solved at the time. The notion of “house arrest” and a coroner’s jury have fallen out of legal practice. They lasted in England longer than in the U.S. How did these practices influence crime writing in from the past to the present? The private or police detective did not yet have a role in the criminal process in New York City in 1857. Is a crime story different if it isn’t written from the point of view of a lead detective?

New York City is an important character in this book. New York is an urban environment but the book also depicts the waterways, geography and natural boundaries. Do you think the differences in population or transportation made city life less vital? How was each character shaped by the pressures of urban life? Who was benefiting from the rapid growth of the city and who was not? Even though the city is radically changed, how many of the divisions of urban life still exist today in American cities: uptown/downtown, residential/commercial, encroaching development/green spaces, wealth/poverty, high/low entertainment districts?

The role of the Newspapers and communication at this time in our history: Newspapers were king in this time period in NYC. How did the accounts in the newspapers play a role in the events? How were real clippings used inside the story? Do they enhance the story? Even though the technologies have changed in spreading news, are there similar patterns today in breaking stories? Is it possible for any news source to be 100% objective? Is it possible to know if what is reported is truth, rumor or slander? Is there more or less reliable information with the advent of the internet than in the past when there were many vital city newspapers?

What was the political milieu at the time in NYC in 1857? New York was experiencing an economic boom in 1857. A great resource for what was going on in the rest of the country is America in 1857: A Nation on the Brink, by Kenneth M. Stampp. There were many catalytic moments in American history that were shaping the eruption of the American Civil War. But how aware is each character of any outside political influences that might be shaping their future? How do local politics and ambitions play into the story? Can a murder case become a form of entertainment that blinds the public from seeing larger issues? Is it possible to see historical issues clearly when we are living them— or is it only in hindsight?

What about the rights of children? Was it typical for a child like John, who worked as a servant and errand boy at 31 Bond Street to work full time and not go to school? What kind of rights did kids have in this society?

And those of African-Americans, both freed and runaway slaves?: NYC, being part of the Northeast was often thought of as a haven for African American slaves, but what was the real story? What was the Fugitive Slave Act of 1854? Explain the Supreme Court’s Dred Scott Decision of March, 1857. What various roles did African Americans have in the Northern economy? How dependant was the economy of the port of New York on the products from the slave-producing South? How does the character of Samuel embody the pressures of this time in history? Why does he go on the run? What would happen if he had become a witness and testified? Does he make the right decisions?

In mid-Nineteenth century the fate of the American Indians was being played out across the unsettled Territories. When we study history we study the European history of the American colonies and not the preceding centuries of Native American culture. How does that silence affect the way you think about the US? How were indigenous tribes from the Eastern states faring after a century of displacement by Europeans? In which ways did urban life affect those who remained in the East and how were they adapting? How does Katuma feel about the encroachment of Europeans on his traditional lands? Are Katuma’s actions more or less justifiable than Emma’s? A book for reference is Native New Yorkers, by Native American author Evan Pritchard.

What is fiction and what is fact in 31 Bond Street? Much of the novel is based on actual documents and true events in this case. Which characters were real and which were made up? What events in the book were embellished? Do you find that using real characters in a fictional novel works? Does this make you want to read more about the actual case or other aspects of the history the era? Can a fictional work give a real “sense” of the past?