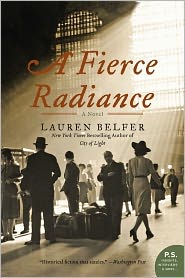 From the New York Times bestselling author of City of Light comes a compelling, richly detailed tale of passion and intrigue set in New York City during the tumultuous early days of World War II.

Claire Shipley is a single mother haunted by the death of her young daughter and by her divorce years ago. She is also an ambitious photojournalist, and in the anxious days after Pearl Harbor, the talented Life magazine reporter finds herself on top of one of the nation’s most important stories. In the bustling labs of New York City’s renowned Rockefeller Institute,

From the New York Times bestselling author of City of Light comes a compelling, richly detailed tale of passion and intrigue set in New York City during the tumultuous early days of World War II.

Claire Shipley is a single mother haunted by the death of her young daughter and by her divorce years ago. She is also an ambitious photojournalist, and in the anxious days after Pearl Harbor, the talented Life magazine reporter finds herself on top of one of the nation’s most important stories. In the bustling labs of New York City’s renowned Rockefeller Institute, some of the country’s brightest doctors and researchers are racing to find a cure that will save the lives of thousands of wounded American soldiers and countless others—a miraculous new drug they call penicillin. Little does Claire suspect how much the story will change her own life when the work leads to an intriguing romance.

Though Claire has always managed to keep herself separate from the subjects she covers, this story touches her deeply, stirring memories of her daughter’s sudden illness and death—a loss that might have been prevented by this new “miracle drug.” And there is James Stanton, the shy and brilliant physician who coordinates the institute’s top-secret research for the military. Drawn to this dedicated, attractive man and his work, Claire unexpectedly finds herself falling in love. But Claire isn’t the only one interested in the secret development of this medicine. Her long-estranged father, Edward Rutherford, a self-made millionaire, understands just how profitable a new drug like penicillin could be.

When a researcher at the institute dies under suspicious circumstances, the stakes become starkly clear: a murder has been committed to obtain these lucrative new drugs. With lives and a new love hanging in the balance, Claire will put herself at the center of danger to find a killer—no matter what price she may have to pay.

Lauren Belfer dazzled readers with her debut novel, City of Light, a New York Times notable book of the year. In this highly anticipated follow-up, she deftly captures the uncertainty and spirit, the dreams and hopes, of a nation at war. A sweeping tale of love and betrayal, intrigue and idealism, A Fierce Radiance is an ambitious and deeply engaging novel from an author of immense talent.

Lauren Belfer is the author of the New York Times bestselling novel City of Light, a number one Book Sense pick, a Discover Award nominee, and a New York Times Notable Book. Her fiction has appeared in the Michigan Quarterly Review, Shenandoah, and Henfield Prize Stories. She lives in New York City.

“Belfer’s first novel, City of Light, delineated the social and political tension of Buffalo, N.Y. at the beginning of the age of electricity. A FIERCE RADIANCE is similarly ambitious, combining medical and military history with commercial rivalry, espionage and thwarted love. Belfer clearly knows her scientific material. She also knows how to turn esoteric information into an adventure story, and how to tell that story very well.” —New York Times Book Review

“With an exquisite artist’s eye for detail that puts readers right in the middle of New York City and the World War II fronts and incorporating all the elements of a hot, sprawling, page-turning romance—not to mention espionage, murder, crime-scene deceptions, big business intrigue, and family estrangements—Belfer once again blends fiction and facts with riveting results” —Library Journal (starred review)

“Lauren Belfer’s story of love in the time of penicillin is enthralling. A Fierce Radiance shines with fascinating detail about a moment in American history we have mostly forgotten, when penicillin was new, miraculous, and in short supply. Belfer’s powerful portrayal of how people are changed in pursuit of a miracle makes this book an especially compelling read.” —Nancy Horan, author of Loving Frank

“Belfer combines life-and-death scenarios, romance, murder, and wartime reality at home and abroad, while taking a stab at industrialists who profit by dubious means and salve their consciences through philanthropy; and she warns that resistance to antibiotics could return us ‘to the era when otherwise healthy adults died from a scratch on the knee.’ An engrossing and ambitious novel that vividly portrays a critical time in American history.” —Booklist (starred review)

A Fierce Radiance is set in New York, at the onset of World War II. Talk about America during wartime. How was the war a part of the lives of Claire and Charlie Shipley, Jamie Stanton, Edward Rutherford, Bill Shipley, and other Americans? Did any of your relatives serve in the war? What about on the home front—do you know how your relatives’ lives were affected during that time?

Contemporary Americans are also living during a time of war. How have the wars in Afghanistan and Iraq impacted Americans today? Contrast the two times. Do you think Americans today feel as part of the war effort as they did in the 1940s? Explain.

Wartime New York City is brought vividly to life in the novel. What were your impressions of the city? How do those impressions compare to your ideas of what the city is like today? What was the place you call home like during World War II? How does it compare to its contemporary version? Do you think we—as a society and a nation—have lost anything in the decades between then and now?

What is your opinion of Claire Shipley? Do you think she was like other women of her time? How did her background influence her choices, including her work? How did her career shape her outlook on the events that were happening around her? Claire Shipley is a woman trying to be successful in a man’s world, and she exploits her femininity when she needs to. Is this a sign of power or of weakness?

Outside of her son, the most important men in Claire’s life were her father, Edward Rutherford, Jamie Stanton, and Henry Luce. What did each of them mean to her? How did her relationship with each change over the course of the story?

Claire was a photojournalist for Life magazine. Have you ever seen an issue of that publication? What role did Life play in the national consciousness? Do we have anything like Life today?

Think about Claire’s job as a photojournalist and her directives from her boss, Henry Luce. Did she see herself as part of the war effort or as an objective bystander covering events? What is the role of a journalist today? Might our outlook of the Second World War be different if Claire and her colleagues covered it following today’s journalistic standards? What are the pros and cons of objectivity?

Before reading A Fierce Radiance, did you have any idea that penicillin and other antibiotics were discovered less than a hundred years ago? How did these medical miracles change our lives? Are we too reliant on drugs like antibiotics as well as antibacterial household products today? Will these drugs always be as effective as they have been? How do you think can we extend the potency of the drugs we have available to us?

Do you think 21st-century Americans take their good health and advanced medical care for granted? Could you imagine living or raising a child when the simplest of conditions—a cold, a scraped knee, a cat scratch—could lead to death? How do you think you would cope living with such knowledge? Have we as a nation, forgotten the transformation that the discovery of antibiotics and vaccines have made in our lives?

The Rockefeller Institute followed the motto “for the good of humankind.” The doctors, scientists, and researchers worked tirelessly in the name of science, not wealth. Does this kind of selfless humanity still exist? Should everything be done for profit? Why? Do you think we as a nation have lost our sense of shared commitment, of the “common good”?

Claire argues with her father that selling antibacterials are not like selling rivets. He disagrees, to which she responds: “You don’t think there’s well, a human right for people to be able to receive an antibacterial at two cents a dose if that’s what it costs to produce? Okay, at a dollar to allow for a hefty profit, but surely not as much as two hundred dollars for one shot?” How would you answer this? Companies often do spend a great deal of money in research and development, which they want to recoup. But how much profit is enough, or are there no limits, no matter the cost to other human beings?

With the lives of millions of soldiers at stake, the war department claimed the patents on penicillin’s means of production to ensure that no single drug company could either have a monopoly on this essential “war weapon” or to divert government funding into other more lucrative research of their own. Do you think this was a good or necessary thing to do? What might have happened if they decided to let the free market take care of production?

Before doctors can discover cures, they need to do an enormous amount of medical testing. In A Fierce Radiance, some of the subjects were given drugs without knowing the possible side effects. Some of these were interned Japanese Americans. Should they have been told what could happen if they received the medication? Rutherford felt using them as test subjects was a necessary byproduct of saving the many, especially when the drugs saved their lives. Others felt these “Japs”—whom they viewed as possible enemy sympathizers or combatants—didn’t deserve such knowledge. What do you think?

The government lackey, Andrew Barnett, tells Claire, there is “no morality in war.” Do you agree with this? Is “winning at any cost”—if it includes murder and letting a killer go free—victory?

What did you take away from reading A Fierce Radiance?

Do you think Claire and Jamie will be together after the war?