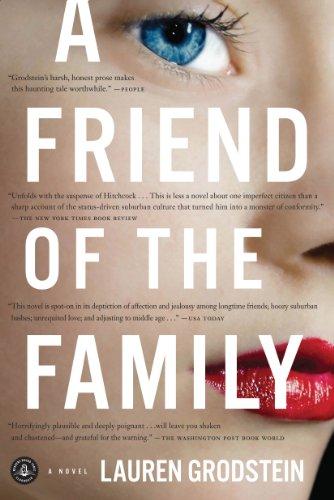 A FRIEND OF THE FAMILY

Pete Dizinoff, a skilled and successful New Jersey internist, has a loving and devoted wife, a network of close friends, an impressive house, and, most of all, a son, Alec, now nineteen, on whom he has pinned all his hopes. But Pete hadn’t expected his best friend’s troubled daughter to set her sights on his boy. When Alec falls under her spell, Pete sets out to derail the romance, never foreseeing the devastating consequences.

In a riveting story of suburban tragedy, Lauren Grodstein charts a father’s fall from grace as he struggles to save his family,

Pete Dizinoff, a skilled and successful New Jersey internist, has a loving and devoted wife, a network of close friends, an impressive house, and, most of all, a son, Alec, now nineteen, on whom he has pinned all his hopes. But Pete hadn’t expected his best friend’s troubled daughter to set her sights on his boy. When Alec falls under her spell, Pete sets out to derail the romance, never foreseeing the devastating consequences.

In a riveting story of suburban tragedy, Lauren Grodstein charts a father’s fall from grace as he struggles to save his family, his reputation, and himself.

Lauren Grodstein is the author of the collection The Best of Animals and a novel, Reproduction is the Flaw of Love. A Friend of the Family was a Washington Post Best Book, A New York Times Editors’ Pick, and an Amazon Best Book of the Month. Her work has been translated into German, Italian, and French. She teaches creative writing at Rutgers University.

“The story… unfolds with suspense worthy of Hitchcock… Grodstein . . . is a terrific storyteller and an even better ventriloquist. She beautifully captures Pete’s sly self-deceptions. . . Ultimately, though, this is less a novel about one imperfect citizen than a sharp account of the status-driven suburban culture that turned him into a monster of conformity.”—Joanna Smith Rakoff, The New York Times

“[A] wonderful second novel . . . Grodstein brings great insight into a father’s protective urge for his son in this gripping portrait of an American family in crisis.”—Publishers Weekly, starred review

“If college applications, crickets singing in cul-de-sacs, and long drives down elm-lined roads are the details of your life, this book will startle you with its familiarity.”—Minneapolis Star-Tribune

“…beautifully captures the ever striving angst of parents who will take any step to ensure their children’s lives are easier or better.”
—USA Today

Discuss whether you think Pete Dizinoff is a reliable narrator—that is, whether you believe his account of the events in the story from beginning to end. Much of the novel is composed of Pete’s memories, but how do we know whether we can trust what he says? Are there such things as reliable memories?

Pete acknowledges his long-ago attraction to Iris Stern, who is now his best friend’s wife. How does that attraction manifest itself in his relationship with Iris’s daughter Laura?

Is Pete a bad person? Is he guilty of anything more than honesty? He claims that everything he’s done in his life—from moving to the suburbs to building his medical practice to ruining his friendship with the Sterns—has been for his son, Alec. To what extent do you believe him?

How do you think Elaine’s struggle with breast cancer affects her perspective on Alec’s future? Do you think her illness shapes her attitude?

Discuss Pete’s responsibility in the death of Roseanne Craig.

Pete is mystified at Laura’s pregnancy, since when he was in high school, “nobody had sex with the Laura Sterns” (page 29). How is teenage sexuality presented in this novel? Is it a refuge? A crime? A normal part of adolescence?

Pete says throughout the book that he’s a lucky man, although, when we meet him, he’s living in the studio above his garage, his medical practice is in tatters, and he might be heading for a divorce. Why is Pete convinced he’s so lucky? What is his definition of luck?

Elaine accuses Pete of only seeing things in “black and white”; Pete counters that “right is right and wrong is wrong” (pages 40 and 260–61). As far as he’s concerned, what Laura Stern did to her newborn in the bathroom of the Round Hill Public Library is fundamentally indefensible. Elaine suggests that there are other ways to consider the event. Who do you agree with? Could there be a rational explanation for what Laura did, or are some acts inherently and inarguably evil?

Alec wants to travel around Europe for a few years, see the great museums, and sell his paintings on the street to support himself. Pete thinks this idea is about as preposterous as any he’s ever heard. How do you think Pete would have treated Alec and his goals if Alec were not an only child? How did Elaine’s fertility problems fuel the action of this novel?

Iris tells Pete that you learn “to forgive your children” (page 204). Has she really forgiven Laura for what she’s done? How have Laura’s actions affected Iris’s marriage? Her career?

There are five deaths mentioned in this book: those of Joe’s father, Pete’s father, Laura Stern’s baby, Roseanne Craig, and Louis Sherman, the patient who died of septicemia. All physicians encounter death, of course, but how do these particular deaths shape Pete as a person? As a doctor?

During her confrontation with Pete at her apartment, Laura Stern refuses to change out of her flimsy pajamas. Why won’t she change her clothing? Why does Pete smoke her cigarettes?

How important is Pete’s Jewish heritage to the story of this novel? How important are his beginnings in Yonkers?

Why do you think Elaine stays with Pete at the end of the book?