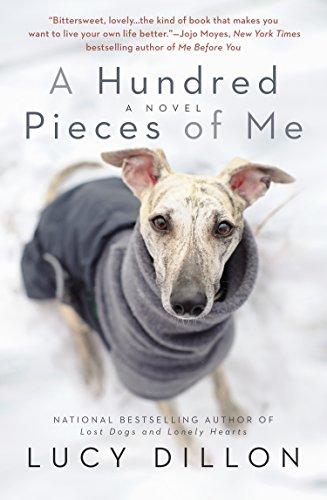 A HUNDRED PIECES OF ME

“Lovely.” –Jojo Moyes, author of Me Before You and One Plus One

From the bestselling author of Lost Dogs and Lonely Hearts comes a delightful, compulsively readable novel about second chances and the magic of letting go…

Reeling from her recent divorce, Gina Bellamy suddenly finds herself figuring out how to live on her own. Determined to make a fresh start—with her beloved rescue greyhound by her side—Gina knows drastic measures are in order.

First up: throwing away all her possessions except for the one hundred things that mean the most to her.

“Lovely.” –Jojo Moyes, author of Me Before You and One Plus One

From the bestselling author of Lost Dogs and Lonely Hearts comes a delightful, compulsively readable novel about second chances and the magic of letting go…

Reeling from her recent divorce, Gina Bellamy suddenly finds herself figuring out how to live on her own. Determined to make a fresh start—with her beloved rescue greyhound by her side—Gina knows drastic measures are in order.

First up: throwing away all her possessions except for the one hundred things that mean the most to her. But what items are worth saving? Letters from the only man she’s ever loved? A keepsake of the father she never knew? Or a blue glass vase that perfectly captures the light?

As she lets go of the past, Gina begins to come to terms with what has happened in her life and discovers that seizing the day is sometimes the only thing to do. And when one decides to do just that…magic happens.

Lucy Dillon is the national bestselling author of The Secret of Happy Ever After, Walking Back to Happiness, and Lost Dogs and Lonely Hearts. She lives in Herefordshire, England, with her pair of basset hounds, Bonham and Violet.

“Bittersweet, lovely…The kind of book that makes you want to live your own life better.” —Jojo Moyes, New York Times bestselling author of Me Before You

“Such a brilliant book. So satisfying and clever and deeply moving. I’ll be passing it on to all my friends.” —#1 New York Times bestselling author Sophie Kinsella

“This vibrant and uplifting novel has not only entertained me hugely, but made me change the way I look at life.” —Katie Fforde, bestselling author of A French Affair

With each major life event, Gina expects her “new life” to

when she moves into her new apartment. “She tried to center

herself: the white walls, the bold blue vase on the windowsill,

the soft lamps, the hyacinth candle. Her place. Her new

life.” Do you think, at the end, that Gina gets a “new life”

and an entirely fresh start?

If you could keep only a hundred things from your life, what

The narration jumps around in time, as if the reader is

unpacking with Gina and reliving memories with her. What

effect does this have on you as the reader? If the novel’s

events had unfolded in chronological order, how would that

have changed your interpretation?

The novel often references karma and everything evening

out in the end. At her wedding, Gina says to Naomi, “Don’t

you think that . . . sometimes the universe balances things

out? . . . You know, we all get our share of good luck and bad luck, eventually.” Do you think that the book supports

this theory of karma?

The three men in Gina’s life are very different. Nick is “a

Kit, or tell her, like Stuart.” Do you think, though, that she

meets each man when she needs him the most, or is she

meant to be with Nick all along?

Gina loves old houses for their history and their ability to

tell a story. However, at the end, she wants to go to her new

apartment with Nick because “there’s nothing in my flat.

No history. Just us.” How do you reconcile Gina’s love for

old houses, filled with ghosts, with her love for her new,

Stuart’s character evolves as the reader learns more about

him and his relationship with Gina. In the end, do you think

Toward the end of the novel, Gina is surprised to learn that

she was a “reckless” child. She also earlier expresses that she

hates having her picture taken because she never looks like

she does in her head. What are some of the differences in the

way Gina sees herself versus how others see her? When

defining our own personalities, how much weight do we

need to give how other people perceive us?

Throughout the novel, Gina tends to draw a firm line between

childhood and adulthood, thinking she should recognize

a “starting gate into proper adulthood.” When do you

think “proper adulthood” begins? Is it something easily

definable, like when you get married or when you move into

Why do you think Gina married Stuart? Was it because she

felt pressure from her mother and Naomi, because she felt it was time to settle down or for an entirely different reason?

Further, do you think they ever truly loved each other?

Gina and Janet are usually at each other’s throats. However,

do you think they are more alike than different? Why or

Gina often imagines the different paths her life could have

taken. At the Magistrate’s House, she wonders if “this was

the house she and Kit would have had, if the version of her

life in which she married him and had several blond and

angelic children had happened.” Do you think that if the

accident had never happened, Gina would have ended up

As she gives her things away to charity, Gina wonders if

“they’d be constructing her personality from books she’d

never got round to reading. From clothes she’d never found

the right occasion for.” If all your belongings were put in a

box and given away, do you think the people unpacking it

would be able to paint an accurate picture of your personality?

How deep would it go?

Gina feels incredibly guilty for “the accident.” To what extent

do you think this guilt controls her life?

Throughout her life, Gina collects objects that she attaches

meanings to, “creating this paper trail of possessions.”

By the end of the novel, Gina has abandoned her hundred-

project, replacing objects with experiences. Do you

think that the novel is trying to convey that objects are

worthless? Are some objects worth holding on to? Why or