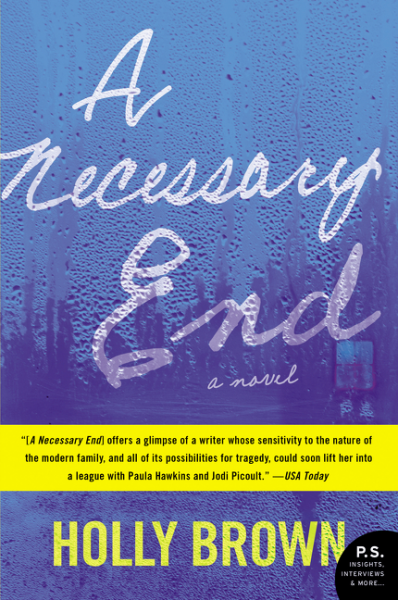 How far would you go to get what you wanted? The author of Don’t Try to Find Me returns with a taut, riveting novel of psychological suspense—a domestic drama full of secrets and twists—about a woman determined to have a child, her ambivalent husband, and a pregnant teenager with a secret agenda of her own.

“I know now that there was no other way things could have turned out. Tragedies are inevitable, just like the great love stories, like us.”

Thirty-nine-year-old Adrienne is desperate to be a mother. And this time, nothing is going to get in her way.

How far would you go to get what you wanted? The author of Don’t Try to Find Me returns with a taut, riveting novel of psychological suspense—a domestic drama full of secrets and twists—about a woman determined to have a child, her ambivalent husband, and a pregnant teenager with a secret agenda of her own.

“I know now that there was no other way things could have turned out. Tragedies are inevitable, just like the great love stories, like us.”

Thirty-nine-year-old Adrienne is desperate to be a mother. And this time, nothing is going to get in her way.

Sure, her husband, Gabe, is ambivalent about fatherhood. But she knows that once he holds their baby, he’ll come around. He’s just feeling a little threatened, that’s all. Because once upon a time, it was Gabe that Adrienne wanted more than anything; she was willing to do anything. . . . But that was half a lifetime ago. She’s a different person now, and so is Gabe. There are lines she wouldn’t cross, not without extreme provocation.

And sure, she was bitten once before by another birth mother—clear to the bone—and for most people, it’s once bitten, twice shy. But Adrienne isn’t exactly the retiring type.

At nineteen, Leah bears a remarkable resemblance to the young woman Adrienne once was. Which is why Adrienne knows the baby Leah is carrying is meant to be hers. But Leah’s got ideas of her own: Her baby’s going to get a life in California; why shouldn’t she? All she wants is to live in Adrienne’s house for a year after the baby’s born, and get a fresh start.

It seems like a small price for Adrienne to pay to get their baby. And with Gabe suddenly on board, what could possibly go wrong?

Holly Brown lives with her husband and toddler daughter in the San Francisco Bay Area, where she’s a practicing marriage and family therapist. She is the author of the novel Don’t Try to Find Me, and her blog, “Bonding Time,” is featured on the mental health website PsychCentral.com.

“Darkly funny and perfectly twisted, […] a gritty look at infertility and adoption, and the implications of being deprived those things we want. With elaborate characters you’ll love to hate and an ending that will stun, Holly Brown proves herself a master storyteller and an expert of suspense.” — Mary Kubica, international bestselling author of The Good Girl

“highly stylized […] Brown adds layer after layer to this well-constructed psychological drama, showing the unchecked emotions seething just below the surface. A clever twist […] illustrates how watching unsympathetic people battle each other can be quite satisfying.” — Associated Press

“[A Necessary End] offers a glimpse of a writer whose sensitivity to the nature of the modern family, and all of its possibilities for tragedy, could soon lift her into a league with Paula Hawkins and Jodi Picoult.” — USA Today

Adrienne is 39, and she and her husband, Gabe, are without a child. Now that she’s

reaching the end(ish) of her childbearing years, she’s obsessed with finding a way to

adopt. Did you, or do you, feel pressure to have children?

If you couldn’t have children, would you consider adopting one or some? Why or why

not? If you already have borne a child or children, would you consider adopting?

Is being an adoptive parent different from giving birth to a child? Should Adrienne and

Leah have different rights as mothers?

Throughout A Necessary End, Gabe feels ambivalent about becoming a father,

while, for Adrienne, becoming a mother is essential to her future happiness. Do you think

men feel differently about parenting than women do? If so, why do you think that is —

biology, social conditioning, or a mix of both?

Unlike Adrienne, some women choose not to have children on purpose. Can you identify

with this choice? Why or why not? Is a woman any less of a person if she decides not to

have children? Does the standard hold true for men as well?

At the beginning of the novel, Adrienne veers toward the extreme when thinking about

and draws hair down her torso with an eyebrow pencil. What do you make of her

behavior? Is it normal, or do you side with Gabe’s hunch that she’s become a little too

Leah proposes a fairly unorthodox plan for the birth of her baby. What were your initial

Michael? Did your opinion change over the course of the book? If you were in Adrienne

or Gabe’s shoes, would you have agreed to an open adoption? Why or why not?

In Chapter 12, Gabe thinks to himself, “Everyone uses everyone.” In a sense, this is true

of all the characters in the book — even the minor ones. Would you agree with his

assessment? Why or why not?

Gabe’s behavior is questionable throughout A Necessary End. He reneges on his

fatherly duties. He slacks off at his job. He even comes on to Leah. A lot of men are

frightened by the idea of becoming a father. Given these real fears, is his behavior

justified? Did you feel any sympathy for Gabe over the course of the book?

Along the same lines, it has been said that the bond between mother and child is

unbreakable. Given this fact, does it excuse Adrienne’s willingness to do whatever it

takes to become a mother? Given Leah’s own upbringing, do her attempts at creating a

family excuse her actions, even if it means nearly destroying Gabe and Adrienne’s

None of the characters in A Necessary End are particularly likable. Which one do

you feel the most sympathy or empathy toward? Who do you think deserves the most

The title of the novel is A Necessary End. Do you think it’s fitting? Why or why

Holly Brown tells the story from two perspectives: Gabe’s and Adrienne’s. How would

of view? Or picked one of the characters and wrote the entire book from his or her

Toward the end of the novel, Brown throws in a few plot twists that take the story down a

shocking path. Did you see any of them coming? Do you think the ending works given

the trajectory of the story? Why or why not? If not, what might be a more suitable

Given Adrienne’s track record with Patty, does it seem credible that she’d willingly enter

into another open adoption situation? Does gullibility or a willingness to see the best in

people have anything to do with her decision, or should she have been more suspicious

Each of the characters keeps secrets from loved ones. Are any of them right to do so, or

are the secrets part of the problem?

If you could pick the best parent for baby Michael, who would it be: Leah, Adrienne,

Gabe, Trevor, or someone else entirely?

In addition to being a novelist, Holly Brown is a marriage and family therapist. Does this

surprise you? How do you think her other career influences her writing?