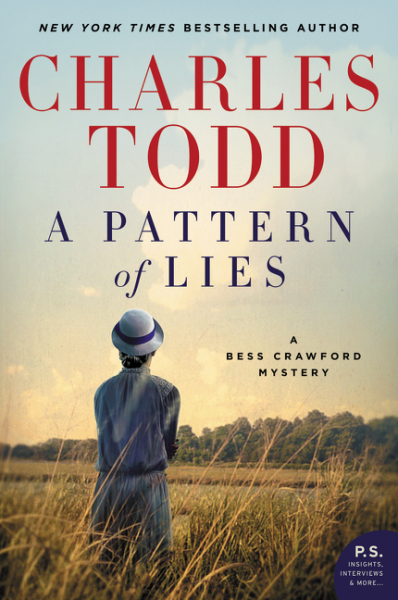 A PATTERN OF LIES

A horrific explosion at a gunpowder mill sends Bess Crawford to war-torn France to keep a deadly pattern of lies from leading to more deaths, in this compelling and atmospheric mystery from the New York Times bestselling author of A Question of Honor and An Unwilling Accomplice.

An explosion and fire at the Ashton Gunpowder Mill in Kent has killed over a hundred men. It’s called an appalling tragedy—until suspicion and rumor raise the specter of murder. While visiting the Ashton family, Bess Crawford finds herself caught up in a venomous show of hostility that doesn’t stop with Philip Ashton’s arrest.

A horrific explosion at a gunpowder mill sends Bess Crawford to war-torn France to keep a deadly pattern of lies from leading to more deaths, in this compelling and atmospheric mystery from the New York Times bestselling author of A Question of Honor and An Unwilling Accomplice.

An explosion and fire at the Ashton Gunpowder Mill in Kent has killed over a hundred men. It’s called an appalling tragedy—until suspicion and rumor raise the specter of murder. While visiting the Ashton family, Bess Crawford finds herself caught up in a venomous show of hostility that doesn’t stop with Philip Ashton’s arrest. Indeed, someone is out for blood, and the household is all but under siege.

The only known witness to the tragedy is now at the Front in France. Bess is asked to find him. When she does, he refuses to tell her anything that will help the Ashtons. Realizing that he believes the tissue of lies that has nearly destroyed a family, Bess must convince him to tell her what really happened that terrible Sunday morning. But now someone else is also searching for this man.

To end the vicious persecution of the Ashtons, Bess must risk her own life to protect her reluctant witness from a clever killer intent on preventing either of them from ever reaching England.

Charles Todd is the New York Times bestselling author of the Inspector Ian Rutledge mysteries, the Bess Crawford mysteries, and two stand-alone novels. A mother-and-son writing team, they live on the East Coast.

“As always, the Todds deftly juggle clues and red herrings, leading Bess and readers on a brisk chase. . . . Their intimate knowledge of rural England and the Great War period inject Bess’ first-person account with a hefty dose of verisimilitude.” —Wilmington Star News

Do you think it was quite fair of Mark Ashton not to tell Bess the whole story about the explosion and the recent attacks on Abbey Hall and his family, before she committed herself to visit there? Was he trying to convince himself that all was well? Would Bess have gone there anyway?

Philip Ashton makes no effort to defend himself when he’s taken into custody. How does this affect the perception that he is guilty of murder and deserves to be tried for all those deaths? Was it pride—or arrogance on his part?

Mrs. Ashton confides in Bess in much the same way that she might have confided in Ellie, who would have been her daughter-in-law. Why do you think this was? What did she see in Bess that she doesn’t find in Clara?

Returning to France, Bess debates with herself about finding the only known witness to the Ashton explosion and fire. What finally convinces her to look for him? Is she sure he can save Ashton? Why is she willing to take the chance he might not?

Sergeant Lassiter is a frequent visitor to the series. What does his “grapevine” tell you about the bonds between soldiers at the Front, who see that messages get through and that word is passed? Do you think their officers are aware of this? Why? Why not?

When another Sister is attacked, Bess is certain that it was meant for her. How do you feel she handles this threat to herself? What gives her the courage to go on, her training as a nurse? Her upbringing with the British Army? Or is it intrinsic in Bess herself?

Bess feels very strongly about her duties as a battlefield nurse. Reading about her work in France with the wounded, what do you think makes her such a good nurse? Has it in any way changed your picture of what these women did in the Great War? How do you think such service changed them? And what long term affect could it have on Bess’s life when the war ends?

Sergeant Rollins refuses to do anything to help the Ashtons. As does his sister who is even more adamant about seeing the family suffer. What do you think drives these two people, and others who feel the same way? Is it a question of class? Is it personal? Or were they already susceptible to quiet manipulation?

What do you think of the Ashtons’ new barrister, Heatherton-Scott, and his valet? Henry has his own secrets but he is quite good at finding out information as his master’s “legs”. Not much is said about Henry’s background. What do you suppose has made him so good at what he does? Do you find him intriguing?

What in your opinion is the difference between Corporal Britton and Captain—now Lieutenant—Collier? Both are killers, but they have different motivations. Do you think Collier has a conscience? His methods for convincing people to turn on the Ashtons worked. Why? Because of his skill—or their need?

Does the plot resonate more with you because it is based on a true story, even though it is fictionalized here? How do you think such a loss of life affected the real village, emotionally and economically? Or the country as a whole, in the middle of a war, when gunpowder was essential to victory? Was the Army right to keep such a loss out of the press?

The comment is made, “What do you do, when you can’t blame God?” In disasters, natural or manmade, do people often want to blame something or someone for their suffering and loss? Is it human nature to look for blame? Or is it the shocking suddenness of tragedy that gives people no time to prepare or to mourn?