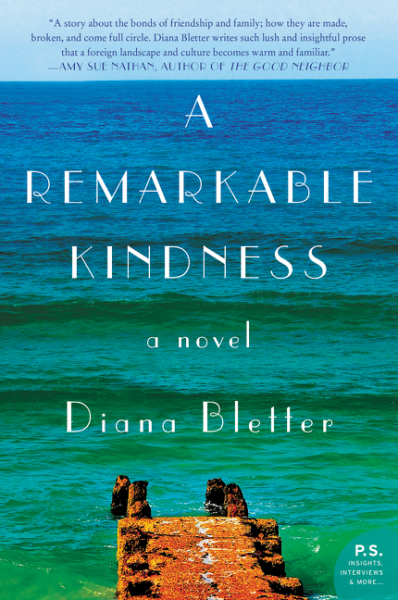 Through a largely hidden ceremony…four friends discover the true meaning of life.

It's 2006 in a seaside village in Israel, where a war is brewing. Lauren, Emily, Aviva and Rachel, four memorable women from different backgrounds, are drawn to the village. Lauren, a maternity nurse, loves her Israeli doctor husband but struggles to make a home for herself in a foreign land miles away from her beloved Boston. Seeking a fresh start after divorce, her vivacious friend Emily follows. Strong, sensuous Aviva, brought to Israel years earlier by intelligence work, has raised a family and now lost a son.

Through a largely hidden ceremony…four friends discover the true meaning of life.

It's 2006 in a seaside village in Israel, where a war is brewing. Lauren, Emily, Aviva and Rachel, four memorable women from different backgrounds, are drawn to the village. Lauren, a maternity nurse, loves her Israeli doctor husband but struggles to make a home for herself in a foreign land miles away from her beloved Boston. Seeking a fresh start after divorce, her vivacious friend Emily follows. Strong, sensuous Aviva, brought to Israel years earlier by intelligence work, has raised a family and now lost a son. And Rachel, a beautiful, idealistic college graduate from Wyoming, arrives with her hopeful dreams.

The women forge a friendship that sustains them as they come to terms with love and loss, and the outbreak of war. Their intimate bond is strengthened by their participation in a traditional ritual that closes the circle of life. As their lives are slowly transformed, each finds unexpected strength and resilience.

Brimming with wisdom, rich in meaningful insights, A Remarkable Kindness is a moving testament to women’s friendship, illuminating a mostly unknown ritual that underscores what it means to truly be alive.

Diana Bletter is a writer whose work has appeared in a wide variety of publications, including The New York Times, The Wall Street Journal, and Commentary. Her first book, The Invisible Thread: A Portrait of Jewish American Women, with photographs by Lori Grinker, was shortlisted for a National Jewish Book Award. In 1991, she moved from New York to a seaside village in northern Israel where she lives with her husband and children, and volunteers in a burial circle.

“Bletter brings this quartet of complex, gutsy, smart, passionate women to life with rare delicacy and depth . . . Loss and endings are part of this novel’s rich fabric. Gracefully written scenes . . . such respect and tenderness.” —Janice Steinberg, author of The Tin Horse

“In this tightly woven tale, where war and loss hover over four American women living in Israel, love blooms between friends and lovers, and Bletter’s reverent rendering of the Jewish burial rituals implores us to grab hold of life.”—Michelle Brafman, author of Washing the Dead

Aviva, Emily, Rachel, and Lauren are all part of a special circle that gives them emotional

support. Do you have a “circle” of friends or a group that gives your life special meaning?

Some of the characters in the novel leave America to escape the expected and familiar. Do

you see this as an American story? And if not, why not? Why do you think each of the

America was founded by people who came to its shores. When we leave it, which part of our

you were to move to another country, where would you go and why?

Lauren feels like the life she’s living isn’t the one she’s supposed to have. She’s moved to

Israel for the strongest reasons, love and family, but can’t shake the part of her that longs for

home, in Boston. What do you think drives what Emily calls Lauren’s “romance for a city”? How

does being in Israel transform Lauren?

Emily takes chances, like impulsively moving across the world to join Lauren. She makes

choices that seem risky, but doesn’t obsess over her mistakes. How does her sense of fate

reflect her choices? Do you relate to her motivations and actions, or are you more of a thinker

Rachel moved to Israel with the desire to change things and help work for peace. She tries

different sorts of work, meeting people who challenge her on many levels, but sometimes feels

that she might be “chasing exhilarating experiences that were all wrong.” Do you think she finds

what she’s looking for?

Aviva endures the loss of a child and a husband, with no choice but to keep living: One night

she “curled up on her side, wanting to squish the grief right out of her,” but forced by Rachel to

leave the house, is reminded “that the universe is still there and hadn’t entirely abandoned her.”

How does she learn to heal from her sorrows? Have you or someone you know experienced

Do you believe that life a series of accidental turns, as Lauren does? Or that things happen

for a reason, as Emily supposes? Do the events in the book prove either idea?

For the women of the burial circle, the ritual makes them appreciate their lives with fresh

eyes. Do you have similar routines or reminders in your life to inspire you to live in the moment?

The novel has a strong message about the circle of life, and its inevitable end—not only the

death of those we love, but our own. What kind of ritual would you like for yourself after you’ve

all? Would you like someone to recite a special prayer for you? A song? A poem?

In the neighborhood of the novel, in contrast to the war going on in the larger setting, a wide

variety of people form deep and abiding relationships. Do you have friends with different beliefs

and customs than yours? How does your own community compare?

What did you learn about Jewish traditions? Do you turn to religious traditions during crises?

What kind of rituals do you have to help deal with grief? What does the novel teach about