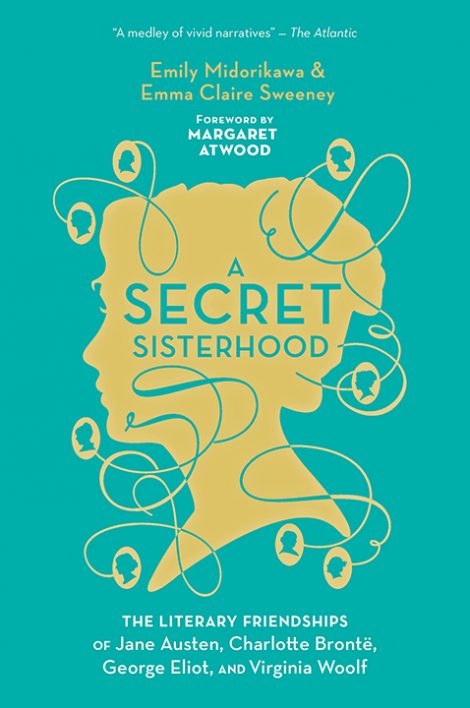 Male literary friendships are the stuff of legend; think Byron and Shelley, Fitzgerald and Hemingway. But the world’s best-loved female authors are usually mythologized as solitary eccentrics or isolated geniuses. Coauthors and real-life friends Emily Midorikawa and Emma Claire Sweeney prove this wrong, thanks to their discovery of a wealth of surprising collaborations: the friendship between Jane Austen and one of the family servants, playwright Anne Sharp; the daring feminist author Mary Taylor, who shaped the work of Charlotte Brontë; the transatlantic friendship of the seemingly aloof George Eliot and Harriet Beecher Stowe; and Virginia Woolf and Katherine Mansfield, most often portrayed as bitter foes,

Male literary friendships are the stuff of legend; think Byron and Shelley, Fitzgerald and Hemingway. But the world’s best-loved female authors are usually mythologized as solitary eccentrics or isolated geniuses. Coauthors and real-life friends Emily Midorikawa and Emma Claire Sweeney prove this wrong, thanks to their discovery of a wealth of surprising collaborations: the friendship between Jane Austen and one of the family servants, playwright Anne Sharp; the daring feminist author Mary Taylor, who shaped the work of Charlotte Brontë; the transatlantic friendship of the seemingly aloof George Eliot and Harriet Beecher Stowe; and Virginia Woolf and Katherine Mansfield, most often portrayed as bitter foes, but who, in fact, enjoyed a complex friendship fired by an underlying erotic charge.

Through letters and diaries that have never been published before, A Secret Sisterhood resurrects these forgotten stories of female friendships. They were sometimes scandalous and volatile, sometimes supportive and inspiring, but always—until now—tantalizingly consigned to the shadows.

Emily Midorikawa‘s work has been published in the Daily Telegraph, the Independent on Sunday, and the Times. She is a winner of the Lucy Cavendish Fiction Prize and was a runner-up in the SI Leeds Literary Prize (judged by Margaret Busby) and the Yeovil Literary Prize (judged by Tracy Chevalier). She has a history degree from University College London, and is a graduate of the University of East Anglia’s creative writing masters program. She now teaches at New York University–London.

Emma Claire Sweeney‘s work has been published in the Guardian, the Independent, andthe Times. She has won Arts Council and Royal Literary Fund Awards, and her debut novel, Owl Song at Dawn, came out to critical acclaim in 2016. Emma holds an English literature degree from the University of Cambridge, a creative writing MA from the University of East Anglia, and her Ph.D. focused on Virginia Woolf. Emma now teaches at New York University–London.

Margaret Atwood is the author of more than forty books of fiction, poetry, and critical essays. In addition to The Handmaid’s Tale (now a Hulu series) her novels include The Blind Assassin (winner of the Booker Prize), Alias Grace (winner of the Giller Prize in Canada and the Premio Mondello in Italy), The Robber Bride, Cat’s Eye, The Penelopiad, The Heart Goes Last, and Hag-Seed, a novel revisitation of Shakespeare’s play The Tempest, for the Hogarth Shakespeare Project. Her latest book of short stories is Stone Mattress: Nine Tales.  She is also the author of the graphic novel Angel Cat­bird (with cocreator Johnnie Christmas). Margaret Atwood lives in Toronto with writer Graeme Gibson.

“Enthralling, illuminating, and a treat for fans of any of the writers who are covered.” —Booklist, starred review

“Rich and revealing…these forgotten friendships, from illicit and scandalous to radical and inspiring, are revelations.”—Kirkus Reviews

“[An] evocative and well-researched ode to female solidarity.”—Publishers Weekly

A Circle of Single Women

In the most famous portrait of Jane Austen, she wears a gauzy dress and frilled cap, and sits demurely, gazing into the middle distance. In 1869, half a century after her death, her nephew James Edward Austen-Leigh commissioned this romanticized watercolor for his commemorative biography of Jane. The posthumous image took inspiration from a sketch drawn by her sister, Cassandra, in around 1810, when the novelist was in her mid-thirties. Her plain dress in this informal portrait is a far cry from the blue ribbons and diaphanous fabric of the painting used to create the frontispiece to A Memoir of Jane Austen. And the woman who stares from the original sketch conveys an uncompromising demeanor: a wry look in her eyes, her lips pursed and arms defiantly crossed.

Like the later picture favored by her nephew, his sanitized book ?— ?written with the assistance of siblings and one of his cousins ?— ?scoured Jane’s personality of all its grittier qualities. Conveniently ignoring their aunt’s sharp tongue, they preferred to emphasize the neatness of her handwriting, the precision with which she dropped sealing wax onto her letters, the matchless nature of her needlework.

Not only was this younger generation of Austens keen to appeal to high-minded Victorian ideals about propriety, they were also hampered by fading childhood recollections and a dearth of surviving documentation. Here, Cassandra must take some blame. In the 1840s, the elderly woman read each letter she’d received from her sister one last time. Whenever she came across anything particularly intimate or revealing, she paused, committed Jane’s words to memory, and then fed the pages into the parlor’s blazing fire. And so their most private confidences curled and flared and finally darkened to ash.

Cassandra’s eldest niece, Fanny, followed her aunt’s example. She refused to collaborate with her cousins on the memoir and failed to preserve the letters that her father had received from Jane, as well as the vast majority of her own. This stealth begs the question: what secrets could Fanny and Cassandra have been at such pains to hide?

In 1926, The Times (London) published two previously unseen letters, one from Jane and one from Cassandra, both addressed to a woman little known to fans and critics alike. Subtitled “Devoted Friends,” the article introduced readers to “a shadowy figure” named Anne Sharp “for whom Jane Austen had no ordinary affection.” That this woman had not appeared, even fleetingly, in the authorized version of Jane’s life would have seemed strange to readers. From Jane’s opening greeting of “my dearest Anne” to the warmth of the private jokes, family gossip, and heartfelt confidences that followed, it is clear that the recipient was a most treasured confidante.

It might seem curious that the Austen family had been so keen to exclude a figure like Anne, on whose “tender” feelings Jane had come to depend and to whom she considered herself forever “attached.” After all, by the Georgian era the British had moved so far from the classical ideal of friendship as an exclusively male domain that they especially prized such bonds between women. But Jane’s letter, passed down by acquaintances of Anne through their female descendants, calls into question the Austen family’s genteel portrayal of their famous aunt. For Anne was employed as the governess of Jane’s niece, Fanny. Here was a relationship that belied the Memoir’s image of a woman content solely with the company of her family and whose refined acquaintances “constituted the very class from which she took her imaginary characters.”

The uptight tone of Cassandra’s letter to this same Anne Sharp hints at another reason for family disapproval. She accused Anne of “ardent feelings” and made a point of asserting her own greater claim on Jane. Cassandra’s possessivenessand the younger generation’s snobbery speak volumes about why this correspondent appears to us today only as a ghostly apparition, absent from official portraits of the novelist’s life.

But unpublished papers stowed deep in library archives still whisper of this woman and the bond she shared with Jane. To understand why Anne has been excluded from histories of her close friend, we must turn to the words of Jane’s niece, Fanny. Keen as she was to get rid of her father’s documents, Fanny kept her own crimson leather-bound pocket diaries, in which she made meticulous entries from the tender age of ten. Along with a cache of her correspondence, they have been passed down to us unscathed.

These unpublished notebooks and letters, largely unmined by literary critics, shed light on what must have lain at the heart of the deep affection between Fanny’s governess and aunt: like Jane, Anne was a writer.

The child’s entry for a Saturday early in 1804 transports us to a time before she knew anything of Anne’s literary bent. On January 21, the governess was on her way to Godmersham Park ?— ?the grand home of Jane’s far wealthier brother ?— ?to take up employment teaching Fanny. Anne’s overnight journey took her through neat Kent villages and land scarred by freshly dug ditches that divided commons and heaths ?— ?these regimented fields worlds away from the bustle of London, where she was born thirty-one years earlier.

History has shown such scant interest in Anne that, until we discovered her name in an old baptismal ledger, even the year of her birth was unknown. And, as with most working women of her generation, no portrait nor any direct record of her words has ever been unearthed. Despite the wealth of information we have found, our reconstruction of Anne’s life must largely rely on Austen family papers, most notably the account of Fanny, a privileged child born into the landed gentry, trained to regard household staff with kindly condescension.

Fanny’s letters show that she awaited the arrival of her new teacher with both eagerness and nerves ?— ?mixed feelings that Anne surely shared. As the coach carrying the governess reached Godmersham Park, it would have halted at the boundary of the Austens’ estate, its driver dismounting with his key before leading the horses onto the driveway, the towering iron gates closing behind them. As the carriage continued through the estate’s deer park, a break in the trees offered Anne a glimpse of the red-bricked façade of the house, a place already so familiar to Jane: the hatching across its countless windows; the decorative masonry above the pillared entrance; the pleasing symmetry of its flanking pavilions, which had been so fashionably added just twenty-five years before.

On approaching the coach-turning circle, it became clear that one of the new pavilions housed a huge reading room ?— ?surely a cheering sight for a woman who penned theatricals. This library, where Jane enjoyed many an hour of solitude during her lengthy but occasional visits, dwarfed the size of the entrance hall and rivaled the ballroom, creating the impression, at least, that its owners were great lovers of literature. Beyond its checkered windows stood floor-to-ceiling bookshelves whose volumes would have offered something of a sanctuary to the intellectually curious.