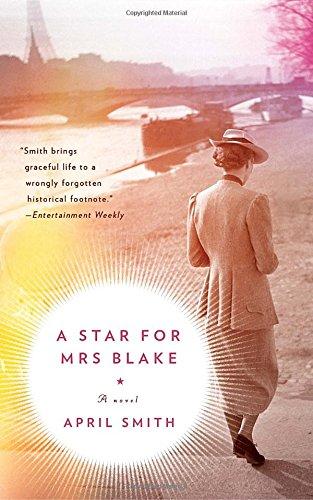 A STAR FOR MRS. BLAKE

Cora Blake, a small-town librarian living on the tiny island of Deer Isle, Maine, is no stranger to loss. In the midst of the Great Depression, she is caring for three nieces and her brother-in-law Big Ole Uncle Percy after the death of her sister and mother from cholera. She has also lost her only son, Sammy, during the final days of World War I. She has just trudged through miles of snow and begun her messy work at the local cannery when the postmaster arrives with a delivery from the United States government. Cora has received an invitation to travel with thousands of other grieving military mothers from across the country to the Meuse-Argonne American Cemetery in France,

Cora Blake, a small-town librarian living on the tiny island of Deer Isle, Maine, is no stranger to loss. In the midst of the Great Depression, she is caring for three nieces and her brother-in-law Big Ole Uncle Percy after the death of her sister and mother from cholera. She has also lost her only son, Sammy, during the final days of World War I. She has just trudged through miles of snow and begun her messy work at the local cannery when the postmaster arrives with a delivery from the United States government. Cora has received an invitation to travel with thousands of other grieving military mothers from across the country to the Meuse-Argonne American Cemetery in France, where their sons have been interred.

Inspired by the real-life diary of a Gold Star Mothers liaison officer named Colonel Thomas Hammond, Smith presents a beautiful, raw, and honest narrative that examines the most intimate effects of war and shines a light on the journey toward consolation. Readers will be unable to put down this emotional story of love and loss that courageously explores what it means to be a woman, a soldier, a pilgrim, and a Gold Star Mother; what it means to sacrifice; and how we find peace. Engaging and heartfelt, Smith’s story carries readers along with the characters on a journey of faith, doubt, discovery, and healing, illuminating the bonds of common experience and revealing the deep and moving transformation that is possible if we have the courage to leave behind that which is familiar to us and seek our peace.

April Smith is the author of the successful novels featuring FBI Special Agent Ana Grey as the central character. She is also an Emmy-nominated television writer and producer. In her research for A Star for Mrs. Blake, she traveled to Maine, New York City, Paris, Verdun, and the Meuse-Argonne American Cemetery. Her home base is Santa Monica, California, where she lives with her husband.

“A Star for Mrs. Blake is a beautifully written, meticulously researched slice of American history. April Smith’s poignant and tender story of five courageous World War I Gold Star mothers’ amazing journey across the sea is one you will never forget.” —Fannie Flagg

“Detailed and colorful . . . A story of America—rich in the lives of each of the characters.” —Pittsburgh Post-Gazette

“Moving and surprising. . . . Smith, a lucid writer with a detective’s eye for detail, doesn’t let us forget the painful event that launched her heroine’s journey.” —BookPage

The Gold Star Mother’s group was founded after World War I. Why was President Herbert Hoover so eager to pass legislation to fund these pilgrimages? Was there more to it than wanting to honor the fallen soldiers and their mothers.

Consider the Gold Star Mothers in Party A featured in April Smith’s book. How would you characterize their relationship with one another? How are the women different? How are they similar? What tensions are evident between them and what is at the root of these problems?

The parents of each soldier had the choice of whether to inter their son’s remains in America or in France. What was behind Cora Blake’s ultimate decision to have her son interred in France? Do you think she was at peace with that decision?

What cultural issues does the mix-up of Wilhelmina Russell and Selma Russell expose? There is documentation that some “Negro mothers” would not go on the trip when they found out they wouldn’t be treated as equals to the “white mothers.” Do you agree with these mothers’ decisions not to go?

What does Smith mean when she writes of war and “the democracy of death” (page 22)? What examples are found in the book?

How are the mothers treated in America? How are they received in France? What does this seem to indicate about international opinions of America’s role in the war?

While much of the focus of the story is on the physical and emotional journey of each of the Gold Star Mothers, what kind of journeys do Lieutenant Thomas Hammond and Nurse Lily undertake? How do they change from the start of the pilgrimage to its conclusion? What causes these changes?

The book features several expatriate characters. Does Smith indicate why these Americans are living in France? What kinds of occupations do they have? What do they share in common? What do these characters suggest about postwar living in Europe? Who are some real-life expatriates and how do they compare with Smith’s expatriates?

The tension between Clancy Hayes and Griffin Reed helps to illuminate issues of ethics, propaganda, and the role of the press in determining how war is presented. How does each journalist approach the task of writing about war and its effects? Why does Reed have such a problem with Hayes? How is Reed’s version of the story of the Gold Star Mothers different than Hayes’s version? What is the overall effect of the article Reed writes? How is it received? Why is this important?

There are different ideas about war expressed by the book’s characters: the mothers, the journalists, Nurse Lily, and Lieutenant Hammond. What are those ideas and how do they compare? How does General Perkins’s point of view affect our understanding of the issues at hand? Who do you sympathize with the most?

American expatriate journalist Griffin Reed wears a mask because of his severe disfigurement, but this mask may also be interpreted as a symbol of secrets, the inner self, and the emotional masks we all wear. What secrets do each of the characters keep? Is one more surprising than another? Why is Cora’s telling of her story to Reed so important? Does he keep her secret? How do the characters react to the revelation or discovery of each other’s secrets?

What part does legacy play in the book? Cora says that her family’s military involvement dates back to the time of the Revolutionary War. Perkins is from an army family, as is Lieutenant Hammond. How do tradition and the will to break from tradition feature as themes of the book? Consider Minnie Seibert’s reaction to the young woman on the bus. Why is Minnie so disgruntled by the young woman’s initial response to her?

Each of the female characters is confronted with her own personal choices. What do their situations tell us collectively about the role of women during this time? Do the women change throughout the story, or do they continue to adhere to societal norms and roles?

Evaluate the motif of pilgrimage in the book. How is a pilgrimage different from a trip? How does this categorization tie the book in with a greater thread in American history? What does this tell us about common experience? What common plights and challenges do all pilgrims face and how do they surmount these?

Discuss the treatment of faith in the book. What examples of faith are found throughout? Besides religious faith, what other kinds of faith are depicted? Which characters experience a loss of their faith or a conflict of faith? Do they ever regain their faith? If so, how? At the conclusion of the book, what do the characters seem to find faith in?

Many of the characters exhibit a strong sense of duty at one time or another. Does this change throughout the story? Is duty to something always external? Or are there any examples in the story of duty to one’s self?

Griffin Reed says that Cora worries over “what a war mother is really supposed to do” (274). Is this question answered by the end of the book? How does Smith’s story change or confirm your own ideas about duty and sacrifice?

A Star for Mrs. Blake is anchored in a footnote of history. The book is inspired by a diary of a real-life American colonel and Gold Star Mother liaison officer, but the story is from the author’s imagination. Discuss the role of truth and accuracy in historical fiction. What other books can this one be likened to? What do these books indicate about war and its effects and the way that we view them? What can a reader take away from reading about events in a novel rather than in a history book?

Nelson DeMille, author of Word of Honor, said, “Everyone who has served or is serving in the military, and also their families and friends, should read this book.” Why do you think he suggests this and do you agree?