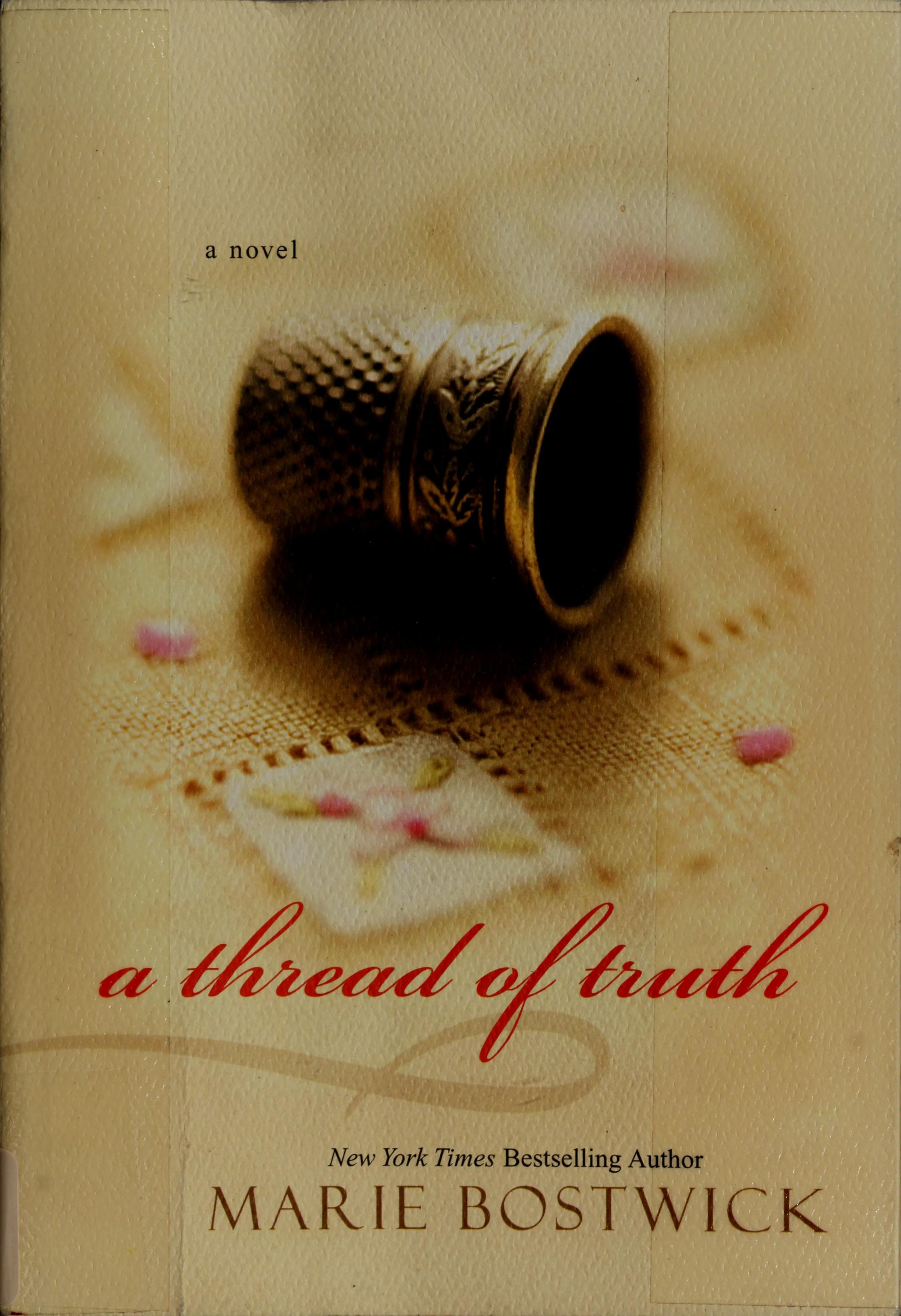 A THREAD OF TRUTH

At twenty-seven, having fled an abusive marriage with little more than her kids and the clothes on her back, Ivy Peterman figures she has nowhere to go but up. Quaint, historic New Bern, Connecticut, seems as good a place as any to start fresh. With a part-time job at the Cobbled Court Quilt Shop and budding friendships, Ivy feels hopeful for the first time in ages.

But when a popular quilting TV show is taped at the quilt shop,

At twenty-seven, having fled an abusive marriage with little more than her kids and the clothes on her back, Ivy Peterman figures she has nowhere to go but up. Quaint, historic New Bern, Connecticut, seems as good a place as any to start fresh. With a part-time job at the Cobbled Court Quilt Shop and budding friendships, Ivy feels hopeful for the first time in ages.

But when a popular quilting TV show is taped at the quilt shop, Ivy’s unwitting appearance in an on-air promo alerts her ex-husband to her whereabouts. Suddenly, Ivy is facing the fight of her life—one that forces her to face her deepest fears as a woman and a mother. This time, however, she’s got a sisterhood behind her: companions as complex, strong, and lasting as the quilts they stitch…

Marie Bostwick was born and raised in the Northwest. Since marrying the love of her life twenty-four years ago, she has never known a moment’s boredom. Marie and her family have moved a score of times, living in eight U.S. states and two Mexican cities, and collecting a vast and cherished array of friends and experiences. Marie has three handsome sons and now lives with her husband in Connecticut where she writes, reads, quilts, and is active in her local church.

“Stitched into the heartwarming second installment of Bostwick’s contemporary New England quilters series is an unbreakable thread of friendship and faith.”—Publishers Weekly

“A pleasant story of friendship, with a message of starting over despite the odds. It will remind readers of Debbie Macomber … highly recommended.” —Library Journal

“Bostwick is a topnotch storyteller. Buy A Single Thread, follow it up with A Thread of Truth and enjoy hours of storytelling that will warm your heart and help renew your belief that people can be good, if given the chance.”—Andrea Sisco, Armchair Reviews

An avid quilter, Marie Bostwick has been known to turn to quilting when working through tough life issues—not unlike the women in A Thread of Truth. What is it about working with one’s hands that cultivates a sense of serenity? Can you recall a time when quilting, knitting, or some other handiwork helped you through a tough time?

Evelyn Dixon has built more than a successful small business in Cobbled Court Quilts—she’s created a community of quilters. How did she accomplish this? What are the pluses and minuses of approaching staff and employees like an extended family? Does it work for Evelyn? What does she gain? What price does she pay?

One of the first people Ivy Peterman meets in New Bern is Abigail Burgess Wynne, and Ivy immediately is both dismayed by Abigail’s refined intimidation skills and touched by Abigail’s insistence that a place be found for Ivy and her two children at the women’s shelter. Does Abigail’s power come solely from being the richest woman in New Bern? If not, to what can one attribute her confidence? Would you welcome a friend like Abigail? What would it take to incorporate such a personality into your circle of friends? Is it fair that Abigail’s wealth and power make it possible for her to get her way, even in the name of a good cause?

The specter of domestic violence forms the underpinning of Marie Bostwick’s plot in A Thread of Truth. What moment in the story best captures the fear and helplessness Ivy feels about her situation? How else does Bostwick convey the reality of being a mother on the run from an abusive husband?

The most dangerous time for a woman being abused is when she tries to leave someone. Does that explain why Ivy is less than forthcoming with the details of her life? Does that justify lying to her boss? To her caseworker at the shelter? Where would someone in your community go if she was trying to escape from an abusive spouse?

In A Thread of Truth, Ivy presents herself to the shelter intake worker as “poor, powerless, and poorly educated,” counting on the stereotype of victims of domestic violence to quell any doubts the woman might have about her. Yet studies show abuse happens in all kinds of families and relationships, and persons of any class, culture, religion, sexual orientation, age, and sex can be victims—or perpetrators—of domestic violence. Why do such stereotypes endure? What would it take to change them?

What do you think about Ivy’s reluctance to come clean with her new friends about her past? Is her reluctance reasonable? Or does it contribute to her problems? Why are people so reluctant to share the less-than-perfect aspects of their lives with others? With whom do you share your unvarnished truth?

Many people hesitate to delve too deeply into the lives of those around them, yet the 2004 Allstate Foundation National Poll on Domestic Violence found three-out-of-four respondents personally knew a victim of domestic violence. And the American Psychological Association estimates 40 percent to 60 percent of men who abuse women also abuse children. Do those statistics make you more inclined to report suspected abuse? Do they make you more inclined to reach out to someone you suspect might be in an abusive relationship? Do you know the signs of abuse?

Evelyn set out to New Bern, Connecticut, all on her own from Texas, but when it came to opening Cobbled Court Quilts—and keeping it open—she had the support of a wonderful circle of women. Some of these women work for her; some are simply fellow quilters. Yet all pitched in to help in a way once seen only in families. What one thing had to happen before these women could come together? How would you go about building such a foundation of friendship in your own life? Or have you already done so? Given the mobility of Americans today, are those we work with and those we choose to let in our lives our new family?