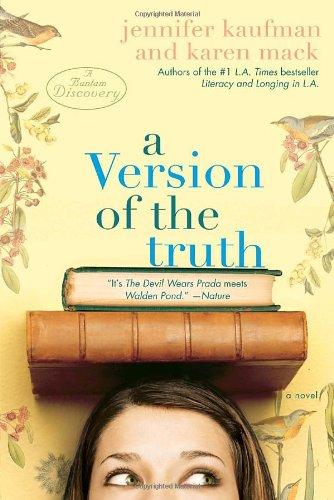 A VERSION OF THE TRUTH

From the critically acclaimed authors of Literacy and Longing in L.A. comes the ultimate story for late bloomers of every exotic shade. And a quirky young heroine with a knack for reinvention and a flair for the unexpected no reader will ever forget. Thirty, newly single, and desperately in need of a paycheck, inveterate bird-watcher Cassie Shaw finds herself doing something that goes against all her principles. She lies on a résumé to land a job and finds herself employed at an elite university working for a pair of professors as unique as the rare birds she covets.

From the critically acclaimed authors of Literacy and Longing in L.A. comes the ultimate story for late bloomers of every exotic shade. And a quirky young heroine with a knack for reinvention and a flair for the unexpected no reader will ever forget. Thirty, newly single, and desperately in need of a paycheck, inveterate bird-watcher Cassie Shaw finds herself doing something that goes against all her principles. She lies on a résumé to land a job and finds herself employed at an elite university working for a pair of professors as unique as the rare birds she covets. One of them is the sexy, handsome, cheerfully aristocratic expert in animal behavior, Professor William Conner. Under his charismatic tutelage, Cassie begins her personal transformation into the person she was meant to be while meeting the kinds of people she has never met before. But when your entire future and your unlikely new career teeters on an unbearable untruth, the masquerade can’t go on forever. And when Cassie steps out from behind her mask it will transform her life—and the lives of those around her—forever.

Hilarious and wry, lyrical and uplifting, A Version of the Truth asks: what happens when your life is teetering on a looming deception? And how far would you go to become the person you want to be?

Jennifer Kaufman was a staff writer at the Los Angeles Times and is a two-time winner of the national Penney-Missouri Journalism Award. Their debut novel, Literacy and Longing in L.A., was a #1 Los Angeles Times bestseller and also won the 2006 Southern California Booksellers Association Award for Fiction. Karen Mack, a former attorney, is a Golden Globe Award–winning film and television producer.

“An engaging story about a young woman transforming herself into the kind of person she’s always wanted to be…a thoughtful version of the girl-done-good tale.” —Kirkus Reviews

“Delightfully merging humor, philosophy and reflections on nature, this novel is a lot of fun…. winsome.”—Publishers Weekly

Discuss the storytelling approach used in this novel. Did you find Cassie’s first person narrative effective or limiting? Do you perceive her inner voice as accounting for reality? How would the story change if it were told in third person?

Comment on the setting of this book. What role does the wild and beautiful nature of Topanga Canyon–and the many free-spirited people it attracts, like Cassie’s mother–play on Cassie’s character and lifestyle?

Discuss Cassie’s decision to lie on her resume when applying for her job. Knowing all the extenuating circumstances that could take away from this act of dishonesty (her financial need, her learning disability, etc.), do you think it was worth the risk? At one point in the novel, Cassie tells Professor Pearce that she would tell the truth if she had to do it over again. Do you believe she would? Would you, if you were in her position?

Compare and contrast the three men we know to be Cassie’s love interests in this novel: Frank, Freddy, and Connor. In what ways is she a different person when she is with each?

What does it say about Cassie’s character that she considers her parrot Sam one of her best friends? Why is she able to connect with animals with such greater ease than other people?

Cassie says she enjoys being in the woods because “you can be whoever you want–chatty and clever and stupid and ugly and unloved and unkissed … and still feel like you belong.” What do you make of this sentiment? How does this statement go along with overarching themes in this novel?

In what ways is Alison initially a foil for Cassie’s character? Though she exudes perfection in her appearance, it seems she doesn’t have much to offer below the surface. What do you make of Cassie’s attempt to look and dress like her?

Describe Cassie’s relationship with Tiff. What does she get out of this friendship?

After working with Professors Connor and Pearce, Cassie begins her personal transformation and is able to grasp and take pride in her natural intelligence. But all of her accomplishments still hinge on her one unbearable untruth. In your opinion, does this make any of them less genuine?

On the whole, it seems Cassie’s reinvention of herself is beneficial–she becomes more confident in her thinking, is able to excel in intriguing classes, and finds love. Are there any negative aspects of her new lifestyle?

Cassie’s mother named her after the Greek goddess Cassandra, who could see the power of the future, but was cursed because no one would believe what she proclaimed. How is the root of Cassie’s name significant to her character, and to the story?

What does the ivory billed woodpecker symbolize to Cassie in this book? Do you believe she ever really saw this elusive bird? Even she doubts herself at the very end of the novel, saying, “Somewhere, deep down inside me, a thought creeps into my head. I hear it as a whisper. I hear it as a warning. Maybe the birds were never really there at all.” What do you make of the author closing the story with these words?

In what ways do the characters, namely Cassie and Connor, connect with the classic and popular authors that Kaufman and Mack have woven into this story, like Walden, Thoreau, Whitman, Muir, and others?

Cassie’s best friend Tiffany tells her that there is such a thing as “a version of the truth.” And Connor tells her “it’s not a lie if you believe it.” Do you agree with either these statements?