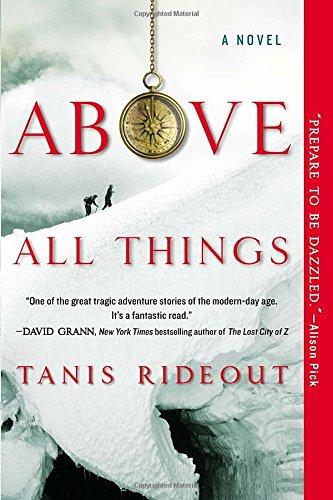 1924. George Mallory is arguably the last great British explorer, having twice tried—and failed—to conquer Mount Everest. The mountain has haunted him, but his attempts have captivated the hearts of a nation desperate to restore its former glory after World War I. Yet George has sworn to his wife, Ruth, that he will not mount a third attempt. He will remain with her and their three children instead of again challenging the unreachable peak.

Then, one afternoon, Ruth reads a telegram addressed to George: “Glad to have you aboard again.”

1924. George Mallory is arguably the last great British explorer, having twice tried—and failed—to conquer Mount Everest. The mountain has haunted him, but his attempts have captivated the hearts of a nation desperate to restore its former glory after World War I. Yet George has sworn to his wife, Ruth, that he will not mount a third attempt. He will remain with her and their three children instead of again challenging the unreachable peak.

Then, one afternoon, Ruth reads a telegram addressed to George: “Glad to have you aboard again.” And with this one sentence, the lives of the Mallorys, and the face of the nation, are irrevocably changed.

A beautifully rendered story about the need for redemption and the quest for glory, Above All Things is a captivating blend of historical fact and imaginative fiction. It is a heartbreaking tale of obsession, sacrifice, and what we do for love and honor.

Tanis Rideout’s work has appeared in numerous publications and has been shortlisted for several prizes, including the Bronwen Wallace Memorial Award and the CBC Literary Awards. Born in Belgium, she grew up in Bermuda and in Kingston, Ontario, and now lives in Toronto. Above All Things is her first novel.

“[A]s heart-pounding as anything in Into Thin Air—and the tension is lamost unbearable, even if we know the outcome. . . . Above All Things, finally, rises to the historic, even mythological occasion. Rideout’s powerful prose about a tragic, brutal end will ahunt you.”—USAToday.com

The novel is told in three different narratives: that of Ruth, of George, and of Sandy. What do you think the reader gains by being able to see the viewpoints of these three main characters? What does each of these perspectives bring to the telling of the story?

When asked why he wanted to climb Mount Everest, George Mallory replied, “because it’s there.” In your opinion, why did George attempt Everest the first time? Do you think his reasoning was different for his final, fated attempt? Why do people embark on similar endeavours, such as running marathons, skydiving, rock climbing, etc.? Have you or would you ever consider a challenge like these?

The question of climbing with or without oxygen was a serious issue in the early twentieth century—an ethical and moral question. Today, nearly everyone who climbs the mountain uses oxygen and much more sophisticated equipment and clothing. Do you think this changes the value of climbing Everest?

In reading a telegram meant for her husband, Ruth finds out that George has agreed to return to Everest. Do you think it would have changed things between them if he had told her himself? How do you think he should have told her? Have you ever discovered terrible news by reading something you shouldn’t have?

Ruth makes a great many sacrifices to support George. What does it mean to be a supportive wife or husband? Do you think George acted selfishly? How do you support someone in something if it requires sacrificing so much for yourself?

While in New York George has a brief affair with another woman. Do you think Ruth knew about this affair? Should George have told her? What does this say about their marriage? Do you think this betrayal is more or less significant than George’s return to Everest against Ruth’s wishes?

George is determined to conquer Everest for himself, but also for his country. In the end, the mountain overcomes him. What does this mean to George? For those at home in England? How would you characterize George’s relationship with Everest?

George decided to go on the expedition against Ruth’s wishes and so she must stay at home and anxiously wait for his return. Do you think Ruth is a strong woman? In what ways is she at the mercy of her love for her husband? Do you feel sympathy for her? Do you think there are any contemporary parallels to her staying at home with her husband away, out to conquer the world, so to speak?

Many explorers, astronauts, adventurers, etc., take tremendous risks at the edge of their pursuits for numerous reasons. Do you think George is justified in his pursuit of his obsession? Is it fair to his wife and children? At what point must one consider the needs of others more than one’s own? How does pride influence—or skew—the clarity of George’s decision making?

As the youngest and most inexperienced member of the expedition, Sandy has to rely on the experience and knowledge of those around him. Do you think George should have chosen a more veteran climber? If so, why? How much confidence does George have in Sandy? Have you ever been in a position to take on a challenging task that you were not fully prepared for? Did you rise to the occasion?

What do you make of the relationship between Will and Ruth? George asks Will to look after Ruth, and Will agrees. Do you think George made a mistake? What do you think Ruth’s feelings are for Will?

Ruth had a whole lifetime in front of her in the aftermath of George’s death as well as the burden of raising three small children by herself. How do you imagine her life to have been during the months and years following the death of her husband?

Consider the extravagance (i.e., champagne) of what the climbers brought with them up the mountain. Meanwhile, when the little coolie boy died, no one seemed to bat an eye. What do you think about this? Were the white men’s achievements done at the expense of the indigenous people?