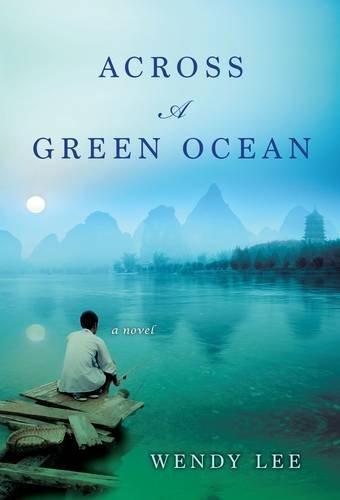 ACROSS A GREEN OCEAN

After his father's death, Michael Tang finds himself in possession of a letter sent to his dad from a long-ago friend in China. Without a word to his mother or sister, he empties his bank account and maxes out his credit cards to make the long journey to a remote part of that enormous country. Once there, he's confronted not just with his American-ness, but with the man his father once was, and how the choices he made long ago continue to echo throughout all of their lives.

His mother, Ling, never expected to be so lonely. After the sudden loss of her husband,

After his father's death, Michael Tang finds himself in possession of a letter sent to his dad from a long-ago friend in China. Without a word to his mother or sister, he empties his bank account and maxes out his credit cards to make the long journey to a remote part of that enormous country. Once there, he's confronted not just with his American-ness, but with the man his father once was, and how the choices he made long ago continue to echo throughout all of their lives.

His mother, Ling, never expected to be so lonely. After the sudden loss of her husband, it becomes clear how distant her children are, even though they're just across the bridge. With her daughter always working and Michael never returning her phone calls, Ling is but a shadow of herself. Most of all, she worries that she's somehow driven her children away—Emily, to long hours and a childless marriage, Michael to a country whose language he doesn't even speak. Though in many ways they are living the lives Ling and her husband sacrificed so much to give them, Ling has to wonder: was it all worth it?

Emily couldn't be living a more different life than the way she grew up. Living in Manhattan, married to a white American, happily childfree—her only connections to China are her family and her work. As an immigration lawyer, Emily sees people at their worst. But it's not until a case ends horribly that she starts to question every choice she's made—every one, that is, except the one her husband hopes she'll reconsider. Suddenly faced with a life she's no longer sure she wants, Emily takes refuge with her mother. But you can't undo the past, and Emily is left wondering if she's ever truly known what she wants.

Wendy Lee is the author of Happy Family, which was named one of the top ten first novels of 2008 by Booklist and received an honorable mention from the Association of Asian American Studies. She has taught writing at the Asian American Writers Workshop and served as a mentor with the nonprofit organization Girls Write Now. She lives in Astoria, New York.

“As haunting as it is inspiring. Lee creates characters who are each, at times, profoundly flawed and deeply moving. I will not soon forget them.”—Katrina Kittle, author of The Blessings of the Animals

“An emotionally-charged story about fear of censure and how it conceals truths that isolate us even as we crave understanding from the ones we love.”—Janie Chang, author of Three Souls

Ling is afraid that her children’s relationship is doomed to “older sibling–younger sibling rivalry or worse, indifference.” What kind of siblings are Emily and Michael? Is Emily a good older sister to her brother? How has their relationship changed over the years?

Describe Emily and Julian’s marriage. Do they have more issues other than the fact that Julian wants children and Emily doesn’t? In explaining their marital problems, Emily says, “We’ve never had to struggle for anything together, against anything, except our parents’ expectations . . . and that’s not enough to keep two people together.” What part does this play in the dissolution of their marriage?

Michael is constantly testing his relationship with David, from going on a trip without telling him to almost cheating on him. Why does Michael feel the need to push these boundaries? Will Michael and David’s relationship last?

How does Gao Hu remind Emily of her own father? Why did she become an immigration lawyer, and how much of it has to do with her parents? Are these good reasons to pursue a career?

In considering her husband, Ling reflects that she knows “how delicate his stomach was; how loud his snores at night; how his discarded socks looked like cow dung. . . . If knowing the most intimate details of someone’s life wasn’t really knowing that person, then what was?” Does knowing these kinds of things about someone mean that you truly know them? How is this different from understanding someone, particularly a spouse?

While visiting Liao’s home, Michael thinks that maybe Liao, rather than his own father, is the lucky one. Even though he spent fifteen years in a labor camp and Han immigrated to America, what does Liao have in his life that Han did not? What do people lose through the immigration process?

How does Liao’s story help Michael forgive his father? Do you believe the saying that “holding on to your anger is like holding on to a piece of live coal that you intend to throw at someone else; in the end, you are the one who is burned”? Is there an instance in your life when you found it difficult to forgive someone?

David tells Emily that “what you’re so sure of when you’re eighteen can change. Or when you’re twenty-eight or thirty-eight.” Do you agree? What personal beliefs change over time and what don’t? Was there something you believed in when you were young that changed over time?

In a sense, Han Tang will always remain an enigmatic person to his wife and children. What kind of closure do they find on their own? How does this help them continue with their lives?

A reason many people immigrate to another country is to make a better life for their children. To many immigrants, this “better life” means traditional spouses, children, and job security—none of which Emily or Michael have by the end of the novel. Is this a betrayal of their parents’ sacrifices? What do the children of immigrants owe their parents?