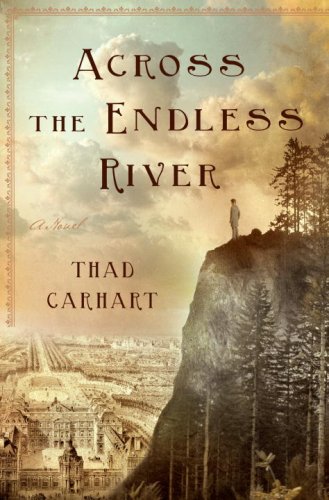 ACROSS THE ENDLESS RIVER

Born in 1805 on the Lewis and Clark expedition, Jean-Baptiste Charbonneau was the son of the expedition’s translators, Sacagawea and Toussaint Charbonneau. Across the Endless River compellingly portrays this mixed-blood child’s mysterious boyhood along the Missouri among the Mandan tribe and his youth as William Clark’s ward in St. Louis. The novel becomes a haunting exploration of identity and passion as eighteen-year-old Baptiste is invited to cross the Atlantic in 1823 with young Duke Paul of Württemberg.

During their travels throughout Europe, Paul introduces Baptiste to a world he never imagined.

Born in 1805 on the Lewis and Clark expedition, Jean-Baptiste Charbonneau was the son of the expedition’s translators, Sacagawea and Toussaint Charbonneau. Across the Endless River compellingly portrays this mixed-blood child’s mysterious boyhood along the Missouri among the Mandan tribe and his youth as William Clark’s ward in St. Louis. The novel becomes a haunting exploration of identity and passion as eighteen-year-old Baptiste is invited to cross the Atlantic in 1823 with young Duke Paul of Württemberg.

During their travels throughout Europe, Paul introduces Baptiste to a world he never imagined. Gradually, Baptiste senses the limitations of life as an outsider. His passionate affair with Paul’s older cousin helps him understand the richness of his heritage and the need to fashion his own future. But it is Maura, the beautiful and independent daughter of a French-Irish wine merchant Baptiste meets in Paris, who most influences his ultimate decision to return to the frontier.

Rich in the details of life in both frontier America and the European court, Across the Endless River is a captivating novel about a man at the intersection of cultures, languages, and customs.

A dual citizen of Ireland and the United States, Thad Carhart is the author of the international bestseller, The Piano Shop on the Left Bank. He lives in Paris with his wife, the photographer Simo Neri, and their two children.

Praise for The Piano Shop on the Left Bank

“Carhart writes with a sensuousness enhanced by patience and grounded by the humble acquisition of new insight into music, his childhood, and his relationship to the city of Paris.”
—The New Yorker

The first part of Across the Endless River is called “Two Paths.” What do you think this initially refers to and how does this designation come to gain significance throughout the narrative?

When Baptiste and Duke Paul first arrive in Paris, Baptiste sees things he had never before imagined. What strikes him as impressive or interesting? As his travels continue, does Baptiste’s wonder about these new experiences remain?

Baptiste first meets Maura at a ball in Paris. How is she different from other young women of her time? What choices does she face, both professionally and personally? How do these compare to the choices Baptiste confronts?

After his mother’s death, Baptiste is left without a true paternal presence— “Everyone claimed to be his father: Charbonneau, Clark, Chouteau, Limping Bear, President Jefferson, Jesus himself.” How does this lack of a traditional father figure shape Baptiste?

In Baptiste’s travels, we witness both a buffalo hunt with the Pawnee tribe along the Missouri River basin as well as a stag hunt in a forest in France. What differences strike you about the two ways of hunting animals in the 1820s? What does this tell us about the choices facing those living in such different worlds?

Baptiste gradually feels that he lives “in between” two different worlds—without being wholly part of either. Why does he feel this way? Are there present-day situations that give rise to this sense of being on the edge of two languages, cultures, and sets of customs?

In Paris, Baptiste, Duke Paul, and Professor Picard visit Georges Cuvier at the Muséum D’Histoire naturelle. While looking at the collection of animal skeletons there, Baptiste is entranced by the bones of a whale. Why is this skeleton so impressive to him? What resonance does it have with his past?

How does Baptiste come to think of the frontier during his time in Europe? What particular features— geographic or cultural—does he most miss?

In discussing the importance of marriage among European aristocrats, Theresa tells Baptiste, “Compromising with power to protect their interests is something women do every day of their lives. Never forget that, Baptiste.” Where do we see examples of this in the lives of the women in the book?

In a letter to Maura, Baptiste refers to something her father had said: “For those of us who live on the edges of different worlds, history has wounded us and love must save us.” How would you interpret this in terms of the book’s principal characters?

Explain the significance of letter/journal writing in the book. It is through journal writing that we really get a taste of Duke Paul’s perspective. What do we learn about Baptiste through Duke Paul’s writings? What do we discover about Baptiste’s feelings about being abroad through his letters to Captain Clark? How do we see Maura and Baptiste’s relationship grow through their written correspondence?

How does Baptiste’s early bond with his mother prepare him for his future romantic relationships? What does Theresa offer Baptiste that Maura does not and vice versa?

What in Maura’s past prepares her for life in America? Is her notion of becoming a wine merchant on the frontier realistic? Would her choice be yours?

Baptiste carries a small carved stone bird in his pocket. What is the significance of this piece to him? What does it represent?