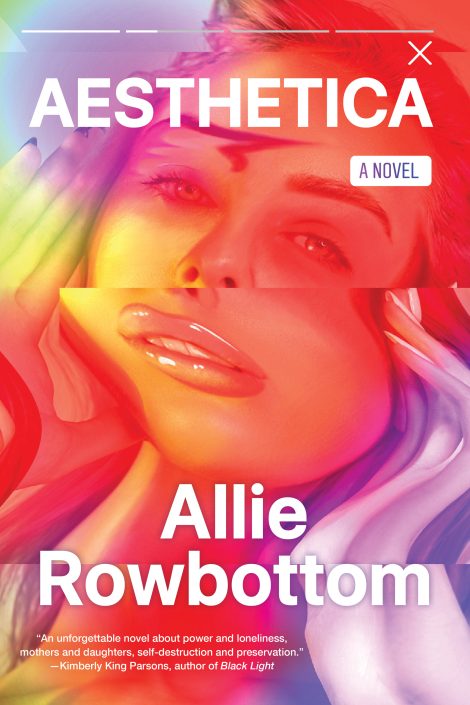 In a debut novel as radiant as it is caustic, a former influencer confronts her past—and takes inventory of the damages that underpin the surface-glamour of social media.

At 19, she was an Instagram celebrity. Now, at 35, she works behind the cosmetic counter at the “black and white store,” peddling anti-aging products to women seeking physical and spiritual transformation. She too is seeking rebirth. She’s about to undergo the high-risk, elective surgery Aesthetica™, a procedure that will reverse all her past plastic surgery procedures, returning her, she hopes, to a truer self. Provided she survives the knife.

In a debut novel as radiant as it is caustic, a former influencer confronts her past—and takes inventory of the damages that underpin the surface-glamour of social media.

At 19, she was an Instagram celebrity. Now, at 35, she works behind the cosmetic counter at the “black and white store,” peddling anti-aging products to women seeking physical and spiritual transformation. She too is seeking rebirth. She’s about to undergo the high-risk, elective surgery Aesthetica™, a procedure that will reverse all her past plastic surgery procedures, returning her, she hopes, to a truer self. Provided she survives the knife.

But on the eve of the surgery, her traumatic past resurfaces when she is asked to participate in the public takedown of her former manager/boyfriend, who has rebranded himself as a paragon of “woke” masculinity in the post-#MeToo world. With the hours ticking down to her surgery, she must confront the ugly truth about her experiences on and off the Instagram grid.

Propulsive, dark, and moving, Aesthetica is a Veronica for the age of “Instagram face,” delivering a fresh, nuanced examination of feminism, #MeToo, and mother-daughter relationships, all while confronting our collective addiction to followers, filters, and faux realities. 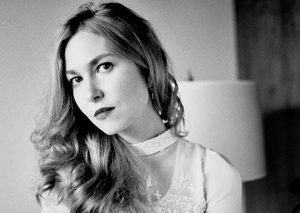 Allie Rowbottom is the author of the memoir Jell-O Girls, a New York Times Editor’s Choice Selection, Amazon Best Book of the Month, Indie Next Pick, and Real Simple Best Book of the year. Allie’s essays and short fiction can be found in Vanity Fair, Salon, Lit Hub, No Tokens, NY Tyrant, The Drunken Canal, Alta Journal, Bitch and elsewhere. She holds a PhD in literature and creative writing from the University of Houston and an MFA from the California Institute of the Arts and has taught fiction and non-fiction at the University of Houston, CalArts, and Catapult. She lives in Los Angeles with her husband, the writer Jon Lindsey.

“One of the best American novels so far about social media.” —NPR

“In a book about looks, the language is tasked with turning words into images. Rowbottom’s buzzy and exacting vocabulary evokes a picture already resting in our minds and on our newsfeeds . . . Aesthetica asks whether someone devoted to beauty can decide to know who they are, rather than simply change it. Anna is stuck between ways of seeing: viewing one path as necessary and another as indulgence, past and future, eternal and ephemeral. No matter which we choose, we somehow always end up right back where we started, still believing we can somehow make ourselves over.” —The New York Times Book Review

“Aesthetica. . . fashions the life of one IG-famous hopeful into a study of our eternal anxieties about youth and desire and self-commodification versus self-empowerment, all against a background of reply-guys comments, brand-friendly boob jobs, and cannabis sponsorship deals.” —Vanity Fair

“The book resists tired takeaways about our digital lives . . . Aesthetica is packed with evocative L.A. references, like Black Dahlia and El Coyote, along with more up-to-date ones, like weed spon-con and selfie walls.” —The Cut

“A gothic twist on the contemporary woman’s life. Immersive, wicked, and so much fun. Allie Rowbottom is the only writer that should be writing on this era of Instagram and Influencers.” —Marlowe Granados, author of Happy Hour

“Rowbottom accomplishes the great magic trick of powerful fiction: she reveals those secret parts of ourselves we’d long buried or forgotten that wait for us, aching to be seen.” —Nada Alic, author of Bad Thoughts

1. What is the significance of Fairy Tale Land in the AESTHETICA? In what ways does it function as a kind of parable, or prediction, of Anna’s life?

2. Anna’s narrative shifts between past and present. What effects does this method of narration have on the overall meaning of the book?

3. What kind of relationship does Anna have with her mother and Leah? How do they view her career on Instagram?

4. Plastic surgery becomes an outlet for Anna in the novel. Why does Rowbottom avoid condemning cosmetic procedures and Anna’s choice to have them? What relationship do Anna’s cosmetic enhancements have to her mother’s surgery?

5. How does Anna’s experience as a model affect her—morally, emotionally, financially?

6. Throughout the novel, particularly as a teenager, Anna discusses her difference from her mother. What purpose does this difference serve for her? By the end of the book, has her perspective shifted?

7. What does the novel suggest about the harsher reality beneath the surface glamour and illusion of Instagram? How do people treat each other in this world?

8. How does Anna move from modeling on Instagram to selling makeup in the “black and white striped store?” Are the jobs similar in any way?

9. What is the significance of the mother and daughter at the hotel pool in the book’s opening chapter? How do they return at the novel’s end? What do they represent for Anna?

10. What is the meaning of the book’s final moments and how do the mother and daughter inform this meaning?

Thank you for your interest in AESTHETICA, my debut novel about @annawrey, a former Instagram model with a plastic surgery addiction looking back on her career—the men she met, the mother she lost, the violence she survived¬—and contemplating the final cosmetic procedure she hopes will save her soul.

The novel represents a fictional exploration of my own girlhood and transition into adulthood. I was seventeen when I moved to New York City and fell hard into the nightlife scene. It was the early 2000s, age of meatpacking district mega clubs, models and bottles, Jeffrey Epstein one table over and Paris Hilton dancing on the bar. It was also the first personal experience I had with American image culture, youth and beauty as currency. Per the mandates of the 1990s era third wave feminism I was born into, I saw self-objectification as my right; it was downright wasteful to eschew the sexual liberation my foremothers had fought for, I believed. And yet, often my experiences as a young woman capitalizing on her youth and beauty ended in pain, regret and more than once, danger.

A decade later, following my mother’s death, I found myself increasingly vulnerable to the beauty standards and Photoshopped images perpetuated by Instagram influencers. I was newly married, a newly frocked PhD, a newly published author; I should have known better than to buy into the impossible ideals influencers and models sold. And yet following them made me feel connected to the wider world—a world of perfect, happy, beautiful people—in a time of intense grief and overwhelm, even as I understood that I was addicted to an app that didn’t accurately reflect reality.

In 2017, the #MeToo movement—with all its power fissures, omissions and oversimplifications¬—further complicated my feelings about social media. Watching and participating in #MeToo led me to question my own conceptions of “good” victimhood, and the resistance I felt to moral ambiguity—why did I consider certain women’s testimonies easier to support than others? Why were women who chose to profit from or perform their sexuality on social media more suspect than others?

I looked to literature to help me answer these questions but found a hole, as if social media was too low brow a subject to seriously explore, especially from the perspective of an empowered user, an Instagram model who, by virtue of her choice to self-objectify, many people might presume to be vapid. This didn’t entirely square with what I found on social media, and I began AESTHETICA to address the dueling possibilities for personal empowerment and ruin I saw at work on image-based platforms. Can the filters, Photoshop and plastic surgery needed to become “Insta-famous” also be tools of empowerment for women and gender non-conforming people, so often robbed of the agency to control their bodies and how they are consumed? If so, how do we weigh the possibility of empowerment against the unrealistic ideals cultivated by edited, surgically-altered images, and the very real consequences for teenagers in particular, who not only make up the bulk of Instagram users, but are also sixty percent more likely to commit suicide in 2020 than in 2007?

These are the questions I let challenge, confuse and guide me as I wrote AESTHETICA, alongside the personal questions I still ask myself about mother loss and a deep longing to return to a feminine sphere I’m not sure exists beyond girlhood. It’s a sphere I see simulated by Instagram. But as Anna discovers at the novel’s end, it’s a sphere best reclaimed through the sharing of experiences among women, an imperative to speak that, when practiced by many, becomes an agent of great change.

Thank you for reading,
Allie Rowbottom