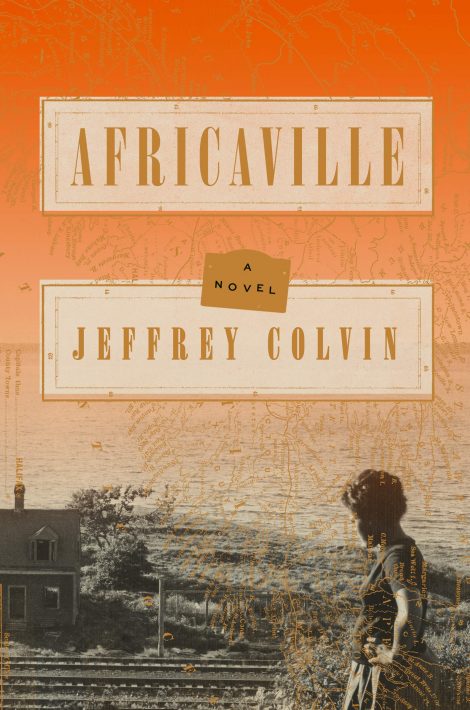 A ferociously talented writer makes his stunning debut with this richly woven tapestry, set in a small Nova Scotia town settled by former slaves, that depicts several generations of one family bound together and torn apart by blood, faith, time, and fate.

Structured as a triptych, Africaville chronicles the lives of three generations of the Sebolt family—Kath Ella, her son Omar/Etienne, and her grandson Warner—whose lives unfold against the tumultuous events of the twentieth century from the Great Depression of the 1930s, through the social protests of the 1960s to the economic upheavals in the 1980s.

A ferociously talented writer makes his stunning debut with this richly woven tapestry, set in a small Nova Scotia town settled by former slaves, that depicts several generations of one family bound together and torn apart by blood, faith, time, and fate.

Structured as a triptych, Africaville chronicles the lives of three generations of the Sebolt family—Kath Ella, her son Omar/Etienne, and her grandson Warner—whose lives unfold against the tumultuous events of the twentieth century from the Great Depression of the 1930s, through the social protests of the 1960s to the economic upheavals in the 1980s.

A century earlier, Kath Ella’s ancestors established a new home in Nova Scotia. Like her ancestors, Kath Ella’s life is shaped by hardship—she struggles to conceive and to provide for her family during the long, bitter Canadian winters. She must also contend with the locals’ lingering suspicions about the dark-skinned “outsiders” who live in their midst.

Kath Ella’s fierce love for her son, Omar, cannot help her overcome the racial prejudices that linger in this remote, tight-knit place. As he grows up, the rebellious Omar refutes the past and decides to break from the family, threatening to upend all that Kath Ella and her people have tried to build. Over the decades, each successive generation drifts further from Africaville, yet they take a piece of this indelible place with them as they make their way to Montreal, Vermont, and beyond, to the deep South of America.

As it explores notions of identity, passing, cross-racial relationships, the importance of place, and the meaning of home, Africaville tells the larger story of the black experience in parts of Canada and the United States. Vibrant and lyrical, filled with colorful details, and told in a powerful, haunting voice, this extraordinary novel—as atmospheric and steeped in history as The Known World, Barracoon, The Underground Railroad, and The Twelve Tribes of Hattie—is a landmark work from a sure-to-be major literary talent.

Jeffrey Colvin served in the United States Marine Corps and is a graduate of the United States Naval Academy, Harvard University, and Columbia University, where he received an MFA in fiction. His work has appeared in Narrative, Hot Metal Bridge, Painted Bride Quarterly, Rain Taxi Review of Books, The Millions, The Brooklyn Rail, and elsewhere. He is a member of the National Book Critics Circle and is an assistant editor at Narrative magazine. He lives in New York City.

“Colvin’s intriguing and memorable debut shines a light on a little-known black experience: the freed slaves from the Caribbean and U.S. who established a community in Canada in the 1800s. [He] expertly weaves in the subject of owning one’s heritage… this is a penetrating, fresh look at the indomitable spirit of black pioneers and their descendants.” -Publishers Weekly

“Africaville feels epic in scope. Jeffry Colvin’s gift for storytelling is on full display in this remarkable debut. From his fresh depictions of a Nova Scotia Black community, to his powerful portrayal of the trials and triumphs of three generations of the Sebolt family, to his authentically rendered landscapes of racial conflict, both inter and intra, Colvin has crafted an immersive read.” -Diane McKinney Whetstone, author, Tumbling and Lazaretto

“Africaville turns history into an engaging family story, one that begins in Nova Scotia and then travels across North America. It’s a gripping and moving book. Jeffrey Colvin writes with such affection and authority. I thought of the fine work of Esi Edugyan and Edward P. Jones and E.L. Doctorow, too. He deserves to be counted in their number and this is an excellent debut.” -Victor LaValle, author of The Changeling

“In Colvin’s carefully constructed family saga, erasure by death, neglect, loss—both intentional and situational—loom from one generation to the next. Despite departure and distance, Africaville ultimately proves to be a tenacious reclamation of story, of place, of belonging.” -Terry Hong, Smithsonian BookDragon

Newborns are never afflicted with the malady. The swollen tongue, the reddish throat, the raw cough seem to afflict only babies older than six months. By the spring, in the village situated on a small knuckle-shaped peninsula just north of Halifax, all five of the stricken babies have now developed a high fever.

Having no luck with sweet milk and lemon bitter, worried mothers administer castor oil mixed with camphor, then a tea of beer’s root steeped with beech ash and clover. When desperate, they even place a few charms under the mattresses of the beds where the stricken babies lie crying.

In mid-April, with three more babies now suffering from the malady, health department nurses visit the village, their faces frozen even before they have examined a single new case. Why our children? several mothers standing in the yard of one house want to know. Hadn’t Halifax already given enough babies in the fire that leveled ten square blocks of the city months before, when the munitions ship exploded in the harbor? Then again, those had been white babies. No colored babies had died in that explosion. Was it now Woods Bluff’s turn to lose infants? And if so, how many—five, ten, all twenty-two?

The following week, after two of the feverish babies die, the mothers turn to the grandmothers, though many are leery of this option. Already several grandmothers have suggested that since the home remedies haven’t worked, and since neither nurse nor doctor has useful medicines, the afflicted infants must be bad-luck babies.

It is an expression the mothers haven’t heard since they were children, though the fear of having a bad-luck baby has terrorized mothers on the bluff as far back as 1790. That was the year the first groups of cabins sprang up across the bluff, displacing the foxes, hare, and moose that ran through the thick Christmas ferns and sheep laurel. Back when no medicine could reinvigorate a baby whose body had begun to show the outline of bones, smothering was sometimes recommended. Take no action, and bad luck might infect the entire village. Best to end the child’s suffering midday, when injurious spirits would likely be bedside, feeding on the moisture of a weak baby’s last breaths.

Yet several mothers are unconvinced the deceased infants are bad-luck babies.

And even if the now-suffering babies are saddled with bad luck, who’s to say those old tales of smothering are true? Had anyone actually seen a mother place a blanket or pillow over a child’s face? And most important for these new cases: by what evidence will we make the diagnosis?

The grandmothers have ready answers. For several descendants of the Virginian who came up to Nova Scotia in 1772 as a messenger in the British army, a feverish baby had to be put to sleep if its father had recently had a limb severed above the knee or elbow. Death was also imminent if the baby’s fever came during the same month as the mother’s birthday. For the granddaughter of the Congolese woman who, in 1785, dressed as a man, sailed into Halifax Harbour on a ship out of Lisbon, Portugal, a feverish baby had to be smothered if the newborn was smaller than a man’s hand.

And for the largest group of grandmothers, those descended from the nearly two hundred Jamaicans who landed in Halifax Harbour in 1788 after being expelled by British soldiers from their island villages for fomenting rebellion, a feverish baby’s fate was sealed if the child coughed up blood during the same month a traveling man arrived on your stoop selling quill turpentine, goat leather, or gunpowder. Hadn’t such a vendor made the rounds in Woods Bluff the month before? Why continue to nurse such a child? Death already had a square toe on the baby’s throat. It was only a matter of days, a week maybe, if the baby were a girl.

The mothers nod as they listen to the explanations, but over the next weeks only one baby is smothered, although Lovee Mills denies doing it. Near the beginning of May, however, another mother on the bluff seriously considers taking the grandmothers’ advice about ending her baby’s suffering. Her afflicted child is the cousin of the first baby that developed the fever. Adding to the mother’s exasperation are the noisy groups of neighbors that have been gathering outside her home each day at sunset, a few of them knocking on the door and asking outright if the bad-luck baby had been relieved of its worldly suffering.

By now the malady has a name. It refers to the style of cabin where the woman and her extended family live. A dogtrot cabin’s construction—two rooms connected by a short breezeway in the middle—had confounded the villagers for years. Some suspected the man who built the cabin wanted a reminder of his home in Virginia. But a breezeway in a dwelling in Nova Scotia? Pure stupidity.

And now living in the cabin has caused two babies to get sick. Many blame the parents and the other members of the large extended family that lives there. Tight living made sense in 1782, they say, but this is 1918. If parents, grown children, and grandchildren are going to continue to jungle up in quarters that tight, what was the use of leaving prison? Even in the best families, sleeping foot to head too long breeds animosity. And if lies, jealousy, and ill will erupt easily in close quarters, why not a virulent fever?

“Will she do it?” someone in the crowd that has arrived at the dogtrot cabin this evening asks.

“If you mean smother the child, she had better,” another replies. “Or else one of us will.”