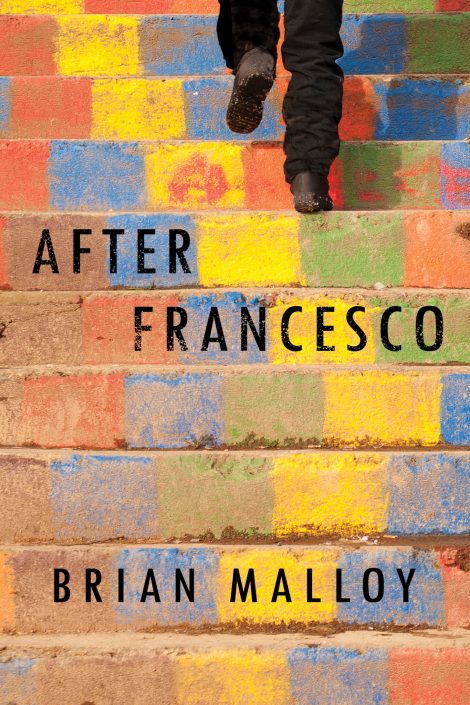 Acclaimed author Brian Malloy brings insight, humor, and the authenticity of his own experiences as a member of the AIDS generation to this universal story of love and loss set in New York City and Minneapolis at the peak of the AIDS crisis. Published on the 40th anniversary of the disease’s first reported cases, After Francesco is both a tribute to a generation lost to the pandemic as well as a powerful exploration of heartbreak, recovery and how love can defy grief.

The year is 1988 and 28-year-old Kevin Doyle is bone-tired of attending funerals. It’s been two years since his partner Francesco died from AIDS,

Acclaimed author Brian Malloy brings insight, humor, and the authenticity of his own experiences as a member of the AIDS generation to this universal story of love and loss set in New York City and Minneapolis at the peak of the AIDS crisis. Published on the 40th anniversary of the disease’s first reported cases, After Francesco is both a tribute to a generation lost to the pandemic as well as a powerful exploration of heartbreak, recovery and how love can defy grief.

The year is 1988 and 28-year-old Kevin Doyle is bone-tired of attending funerals. It’s been two years since his partner Francesco died from AIDS, an epidemic ravaging New York City and going largely ignored by the government, leaving those effected to suffer in silence, feeling unjustifiable shame and guilt on top of their loss.

Some people might insist that Francesco and the other friends he’s lost to the disease are in a better place, but Kevin definitely isn’t. Half-alive, he spends his days at a mind-numbing job and nights with the ghost of Francesco, drunk and drowning in memories of a man who was too young to die.

When Kevin hits an all-time low, he realizes it’s time to move back home to Minnesota and figure out how to start living again—without Francesco. With the help of a surviving partners support group and friends both old and new, Kevin slowly starts to do just that. But an unthinkable family betrayal, and the news that his best friend is fighting for his life in New York, will force a reckoning and a defining choice.

Brian Malloy is an award-winning author and activist. The recipient of ALA’s Alex Award and the Minnesota Book Award, his novels also have been shortlisted for The Violet Quill Award and the Ferro-Grumley Award for LGBT fiction. An early employee of the Minnesota AIDS Project, Malloy helped organize the state’s first AIDS Walk in 1988 and has remained an engaged member of the community. He received his MFA from the University of Minnesota and currently teaches creative writing.

“Like Rebecca Makkai’s The Great Believers, author-activist Malloy’s newest novel is a heartrending portrayal of the realities of healing.” – Oprah Mag, Best LGBTQ Books of 2021

“Furious, funny, and beautiful, After Francesco immerses the reader in the crisis of the AIDS epidemic in 1980s New York. Brian Malloy has created a cast of characters so memorable — so vividly witty and aggrieved and brave and bewildered — you’ll never want to put this novel down.” – Julie Schumacher, author of Dear Committee Members and The Shakespeare Requirement, and winner of Thurber Prize for American Humor

“With characters who are flawed and funny, courageous and fearful, Brian Malloy tells a story that could serve as a guidebook on how to love, how to fight for those we love, and how to honor those we’ve lost without losing ourselves. Beautifully written and infused with a sly humor, After Francesco is a love letter to life.” —Lorna Landvik, author of Angry Housewives Eating Bon Bons

“Heart-breaking, gut-wrenching, yet somehow also sweet and funny, After Francesco is a must-read for those who survived the AIDS epidemic, those who merely witnessed it, and those who never knew about it but need to know now. Brian Malloy has crafted a universal tale of grief and resilience.” —Bonnie Kistler, author of House on Fire

“Kevin Doyle is a wonderfully complex character, a butch knot of muscles, scar tissue, and survivor’s guilt. Brian Malloy surrounds him with a lively mix of friends and family who often understand Kevin better than he understands himself. We can’t help feeling worried for him. This novel is fresh, well-observed, often funny, sometimes angry, and always real. I can’t think of another novel about the AIDS years that captures that difficult, messy, intense age more accurately or movingly.” – Christopher Bram, author of Father of Frankenstein (made into the film Gods and Monsters), Eminent Outlaws: The Gay Writers Who Changed America, and Lives of the Circus Animals

“This is a character I trust completely as a reader, a character who accesses sharp gallows humor as readily as tears, a character both insecure and brave, a character who effortlessly evokes the 1980s East Village he loves but despises. This book centers around a convincing love story, something uncommon enough, but more than that it’s a book about the strength of friendships that are forged in the face of so many enemies and threats. Honest, sarcastic, bighearted–you’ll wish it didn’t have to end.” – John Brandon, author of Arkansas, Citrus County, and A Million Heavens, and the short story collection, Further Joy

1. After Francesco opens with a quote from Vito Russo, a gay film historian and author who died of AIDS in 1990. What meaning do you take from Russo’s statement that AIDS is “like living through a war which is happening only for those people who happen to be in the trenches”?

2. Have you experienced the death of one or more people that you loved deeply? How did the immediate impact of their loss feel different from the longer-term impact?

3. Many of the events depicted in After Francesco are real. Were you familiar with ACT UP’s actions at the F.D.A and Trump Tower, the first Minnesota AIDS Walk, or the Tompkins Square Park riot? Did you prefer ACT UP’s civil disobedience or the AIDS Walk in terms of how best to address the AIDS crisis?

4. Francesco’s sister-in-law defends her fabricated memoir by claiming it’s doing good by raising AIDS awareness and changing hearts and minds. Do you agree? Why do you think she wrote the book?

5. What role does religion play in After Francesco? Do Aunt Nora, Father Michael, and Kevin share any common ground when it comes to faith?

6. In 2018, New York Times writer Kurt Soller addressed the newspaper’s AIDS coverage: “Information about the spread of illness was often scant, judgmental or distressingly vague… often buried in the back of the newspaper, far from national news stories that were deemed important enough for the front page.” Did the media’s failure to cover the crisis contribute to the spread of HIV?

7. There are two depictions of assisted dying (also called assisted suicide) in After Francesco. Assisted dying is now legal and regulated in Oregon and Washington. Should assisted dying be expanded to the rest of the country? Why or why not?

8. Kevin comes to think of his grief as a selfish kind of grief, one that he had to stop hoarding like food during a blight. Did you find his grief selfish? Why or why not?

DECEMBER 1988: ALL THE WAY OUT IN BROOKLYN

The gallery’s a beat-up old East Village storefront covered in graffiti, and the owner, one of the countless friends of Francesco who thought I wasn’t good enough for him, lives in what used to be the storage room. It’s the last opening in this gallery before she moves to her new space in SoHo. I’ve told myself that I’m going to be pleasant to her, even if it kills me, because this is Toshiro’s “coming out” party as an artist, and the first public exhibition of Francesco’s work, organized in honor of their friendship, which predates both Laurie and me.

The title for the exhibition was a challenge. There are so many galleries in New York, with so many exhibitions, that Toshiro wanted his and Francesco’s to stand out. He was tired of the usual titles, which he called, “Self-Important Nonsense—colon—Pretentious Gibberish.’ ” We had walked around SoHo and the East Village looking at exhibits with titles like Breaking Sustainability: Post-Painterly Art of Change and The Bureaucracies of Ground? The Politics of Complacency and Desire of Relevance: A Retrospective of Social Identity.

So his and Francesco’s exhibit is Drawings by 2 Guys, One Live, One Dead: Enjoy!

The gallery’s packed, with lots of East Vill-ahgers, comic book people in Batman and Superman tees, ACT UP people (I really plugged the show at the Monday meetings), and some of the Pyramid crowd, including a healthy representation of drag queens, one towering over the rest at six-four, plus heels.

But the biggest group is fans of Our Sacred Journey Together, who wanted to see art by Suzanne Huntington-Conti’s brother-in-love. That was Pete’s idea. He said the book should benefit Francesco somehow, so he had a colleague in marketing get the word out. Suzanne Huntington-Conti doesn’t make an appearance, and for the first and only time, I admire her restraint.

Pete looks at the nude of me in sunglasses, which the comic book guys walk right past but some drag queens linger over. Then the tallest drag queen moves her group along as she says, “You’re born naked, the rest is drag.”

I feel the heat on my face. “Frankie said it was dishonest.”

Pete gets up close, lingers in front of it. Next he stands back, tilts his head, and squints his eyes. Finally he walks away from it and then walks back.

Pete makes hmmmmm sounds, poses like an art critic with a hand on his chin, the other on a hip. “It’s the glasses. You don’t mind people looking at your body—in fact, you prefer they look at your body. But you’re terrified of them peering into your soul, seeing the man behind the façade. Thus you conceal your eyes, the mirrors to your soul.”

I smirk. “For Chrissake.”

He smiles. “But it sounds like I know what I’m talking about, yes? I think, perhaps, I’ve got a knack for arts criticism.”