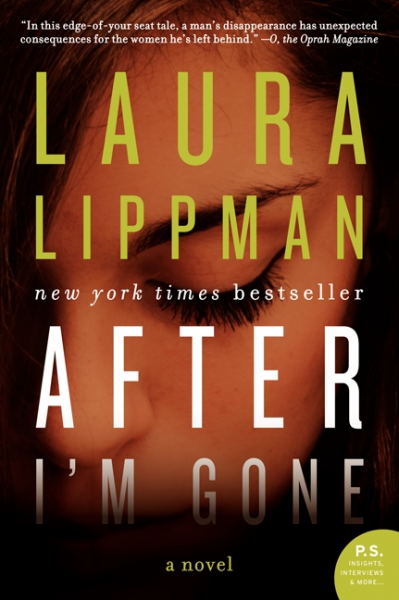 Laura Lippman, the acclaimed New York Times bestselling author of The Most Dangerous Thing, I’d Know You Anywhere, and What the Dead Know, returns with an addictive story that explores how one man’s disappearance echoes through the lives of the wife, mistress, and daughters he left behind.

When Felix Brewer meets Bernadette “Bambi” Gottschalk at a Valentine’s Dance in 1959, he charms her with wild promises, some of which he actually keeps. Thanks to his lucrative—if not all legal—businesses, she and their three little girls live in luxury. But on the Fourth of July,

Laura Lippman, the acclaimed New York Times bestselling author of The Most Dangerous Thing, I’d Know You Anywhere, and What the Dead Know, returns with an addictive story that explores how one man’s disappearance echoes through the lives of the wife, mistress, and daughters he left behind.

When Felix Brewer meets Bernadette “Bambi” Gottschalk at a Valentine’s Dance in 1959, he charms her with wild promises, some of which he actually keeps. Thanks to his lucrative—if not all legal—businesses, she and their three little girls live in luxury. But on the Fourth of July, 1976, Bambi’s comfortable world implodes when Felix, newly convicted and facing prison, mysteriously vanishes.

Though Bambi has no idea where her husband—or his money—might be, she suspects one woman does: his mistress, Julie. When Julie disappears ten years to the day that Felix went on the lam, everyone assumes she’s left to join her old lover—until her remains are eventually found.

Now, twenty-six years after Julie went missing, Roberto “Sandy” Sanchez, a retired Baltimore detective working cold cases for some extra cash, is investigating her murder. What he discovers is a tangled web stretching over three decades that connects five intriguing women. And at the center is the missing man Felix Brewer.

Somewhere between the secrets and lies connecting past and present, Sandy will find the truth. And when he does, no one will ever be the same.

Since her debut in 1997, Laura Lippman has been heralded for her thoughtful, timely crime novels set in her beloved hometown of Baltimore. She is the author of twenty works of fiction, including eleven Tess Monaghan mysteries. She lives in Baltimore, New Orleans, and New York City with her family.

“Despite the murder at its center, this is less a suspenseful whodunit than a masterly novel of character, with secrets skillfully and gradually revealed. Revel in the pace and pleasures of this book […] that should add to Lippman’s literary luster.” —Library Journal (starred review)

“Lippman is as skillful at plot as she is at characters and setting, and the twists in the novel’s final pages are both surprising and satisfying. […] Like everything else Lippman has written, After I’m Gone

We begin the novel with Felix Brewer's point of view as he goes on the lam. Yet we don't return to Felix until the very last chapter, in which we see Felix through the eyes of his housekeeper, Consuelo. Why do you think the author chose to begin and end the story this way? Is this novel about Felix? Why or why not?

Young Bambi describes herself as a prize, and she certainly knows how to manage the game. What is it about Felix that draws her in so quickly and completely? Do you think his absence for much of their adult life influenced her feelings for him positively or negatively?

When Sandy reminisces about his first date with his departed wife, Mary, he recalls, “He was poised, as if on a tightrope, and things were either going to go very wrong or very right, no in-between.” (p.34) Do you think this kind of perspective is borne out by the events of the novel? Use examples to support your opinion.

One of the benefits of a novel with multiple point-of-view characters is that we get to see how each person’s views of each other and of certain circumstances vary. Compare Felix’s perspective of his relationships to Bambi and Julie in the first chapter to the reality these women express through their own perspectives. How else does the author use this technique to explore the complexity of other characters’ relationships?

This novel revolves around two “father figure,” older male characters: Felix, whose absence anchors the story, and Sandy, around whose investigation the story unfolds. Though he did it through criminal activity, Felix provided well for his family and valued his role as a father…until he left town. Sandy is a policeman, but looking back over his life he sees little more than a string of failures, especially regarding his son, Bobby, and his wife, Mary. Discuss these two characters and your opinions of them. What do you think the novel has to say about the total of our successes and shortcomings at the end of life?

On page 145, Sandy admits with some surprise that “the things [he] thought he remembered best were the things he was getting wrong.” But he also wonders if, as long as they were loving (particularly regarding Mary), it really mattered whether his memories were inaccurate. What do you think? How else do memories play a role in the mystery of After I'm Gone?

Sandy Sanchez, our detective, frequently expresses irritation that so many norteamericanos assume his nickname comes from his appearance. They are unaware, he explains with frustration, that fair hair and blue eyes—such as his own—are quite common in Cuba. Identify other characters in the novel who struggle with stereotypes. Who defies the stereotypes that others put on them? In what ways do some characters seem to support their stereotypes?

After the truth is revealed, Bambi muses aloud to Bert, “It would be nice if at least one of us got what we wanted in this world. At least our kids seem to have. There's some comfort in that.” (p. 312). What do you think—do any of the characters in After I'm Gone get what they want? At what cost?

This novel explores what happens to the Brewer women and Julie in the aftermath of Felix's disappearance. As we ride along on their journey, with glimpses into their most private thoughts and sometimes those of their closest friends, what did you come to think of these five women? Did your opinion of them, and their actions, change throughout the novel? If so, how? If not, why not?

Discuss the significance of the title, “After I'm Gone.” In what ways does it refer to Felix? To what other characters and situations might it also apply?