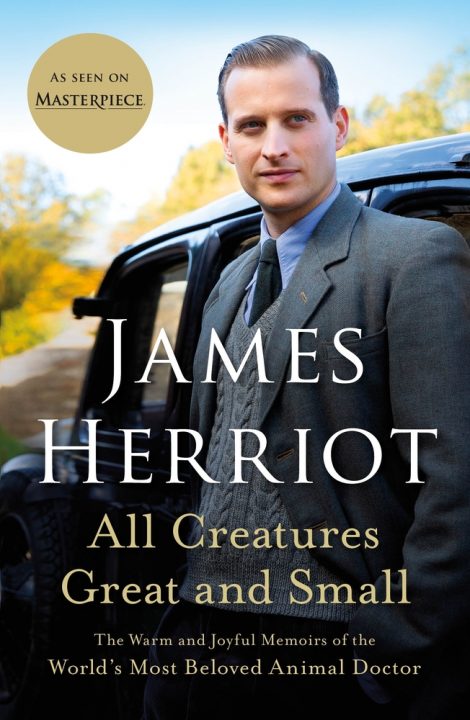 ALL CREATURES GREAT AND SMALL

Delve into the magical, unforgettable world of James Herriot, the world’s most beloved veterinarian, and his menagerie of heartwarming, funny, and tragic animal patients.

For over forty years, generations of readers have thrilled to Herriot’s marvelous tales, deep love of life, and extraordinary storytelling abilities. For decades, Herriot roamed the remote, beautiful Yorkshire Dales, treating every patient that came his way from smallest to largest, and observing animals and humans alike with his keen, loving eye.

In All Creatures Great and Small, we meet the young Herriot as he takes up his calling and discovers that the realities of veterinary practice in rural Yorkshire are very different from the sterile setting of veterinary school.

Delve into the magical, unforgettable world of James Herriot, the world’s most beloved veterinarian, and his menagerie of heartwarming, funny, and tragic animal patients.

For over forty years, generations of readers have thrilled to Herriot’s marvelous tales, deep love of life, and extraordinary storytelling abilities. For decades, Herriot roamed the remote, beautiful Yorkshire Dales, treating every patient that came his way from smallest to largest, and observing animals and humans alike with his keen, loving eye.

In All Creatures Great and Small, we meet the young Herriot as he takes up his calling and discovers that the realities of veterinary practice in rural Yorkshire are very different from the sterile setting of veterinary school. Some visits are heart-wrenchingly difficult, such as one to an old man in the village whose very ill dog is his only friend and companion, some are lighthearted and fun, such as Herriot’s periodic visits to the overfed and pampered Pekinese Tricki Woo who throws parties and has his own stationery, and yet others are inspirational and enlightening, such as Herriot’s recollections of poor farmers who will scrape their meager earnings together to be able to get proper care for their working animals. From seeing to his patients in the depths of winter on the remotest homesteads to dealing with uncooperative owners and critically ill animals, Herriot discovers the wondrous variety and never-ending challenges of veterinary practice as his humor, compassion, and love of the animal world shine forth.

James Herriot’s memoirs have sold 80 million copies worldwide, and continue to delight and entertain readers of all ages.

James Herriot was a veterinarian in Yorkshire, England for over half a century until his death in 1995. His bestselling memoirs include All Things Bright and Beautiful, All Things Wise and Wonderful, The Lord God Made Them All, and Every Living Thing. At age 23, Herriot qualified for veterinary practice with the Glasgow Veterinary College, and moved to the town of Thirsk in Yorkshire to work in a rural practice. He would live in, work in, and write about the region for the rest of his life. Though he dreamed for years of writing a book, his veterinary work and his family kept him busy, and he did not start writing until the age of 50. In 1979, he was awarded the title Order of the British Empire.

“Absolutely super, a rarity, magnificently written, insightful, unforgettable. . . . If you have ever loved a friend, human or otherwise, this is the book for you.” —Houston Chronicle

“One of the funniest and most likeable books around.” —The Atlantic Monthly

“[Herriot] is the most entertaining, most thoroughly likeable, most engaging person to have come along in a long time, and the stories he has to tell are fascinating.” —The Washington Post

“If there is any justice, All Creatures Great and Small will become a classic of its kind . . . With seemingly effortless art, this man tells his stories with perfect timing and optimum scale. Many more famous authors could work for a lifetime and not achieve more flawless literary control.” —Chicago Tribune Book World

1. In chapter 1 of this narrative, a sarcastic and derogatory character known only as Uncle tells the typically hard at work Herriot: “You can ‘ave your book learning. Give me experience every time” (p. 4). Discuss this remark as a key theme of All Creatures Great and Small. Do all of the small farmers and countrymen in this book feel as Uncle does? What about Herriot himself—how do you think he would finally answer the debate about knowledge vs. experience?

2. Revisit the end of chapter 7, where Herriot compares (as he does at other points in his book) working in the city with working in the country. Shortly thereafter, at the beginning of chapter 8, he likens looking out over the Yorkshire countryside to “taking time out of life” (p. 51). What does he mean by this?

3. “I often wondered what drove him on,” writes Herriot of Siegfried Farnon (p. 51). Many pages later, Herriot refers to him as “my gifted but mercurial boss” (p. 216). What do you think drives or motivates him? Why do you think he’s so “mercurial”?

4. In chapter 19, remembering how he watched a batch of newborn piglets gather around their mother, Herriot writes: “I couldn’t say how long I had been standing there looking at the wonder that never grew stale” (p. 116). Make a list of other such moments—moments defined by wonder—that you recall from these pages. Discuss the relationship between this timeless “wonder” and the book’s broader universality (as in, its widely appealing and ever-applicable story).

5. More than once in this book, we as readers encounter a character who loves animals, takes care of animals, cherishes animals, is committed to saving animals, and is also fond of eating those same animals. This even applies to Herriot himself, and to Siegfried. Is this contradictory to you? Why or why not?

6. “The calf felt no pain now that the broken ends of the bone were immobilized,” writes Herriot in chapter 40, “and the fear which always demoralizes a hurt animal had magically vanished” (p. 246). Is it fair to say, regarding the pain and fear that animals experience, that whenever a vet treats one, he or she is automatically treating the other as well? Is this duality also true among doctors and human patients?

7. Later in chapter 43, Miss Stubbs—who’s on her deathbed, and who owns several beloved pets— asks Herriot if he thinks that animals have souls. How does he answer her? Is he telling her what he really believes, or is he telling a dying woman what he thinks she wants to hear?

8. The wealthy and reclusive John Skipton enlists Herriot’s help in chapter 45. Skipton has a pair of old horses who are both ailing; one is thirty, and the other is a year or two younger. He says of his horses:  “They were two slaves when I was a slave” (p. 282). What does he mean here? Why is he taking such devoted care of two very old horses?

9. Look again at the beginning of chapter 55, where Herriot talks about how money “has always formed a barrier between the farmer and the vet” (p. 346). Why are farmers, in Herriot’s experience, often reluctant to pay their veterinary bills? Why does he state that “the veterinary surgeon [now] stands pitilessly exposed as the only man who has to be paid?”

10. “You don’t find people like the Bramleys now,” writes Herriot of a certain family (p. 375). Describe this family, and explain why the author thinks that such “simple people” are no longer to be found nowadays. Also, discuss the fact that—for a book primarily about farm animals and their treatment— this text is actually filled with memorable human beings. Did this strike you, as a reader, as odd? Ironic? Surprising? Necessary? All of the above, or none?

11. In chapter 61, we encounter two distinct families: the Taveners and the Altons. How are these families similar and different?