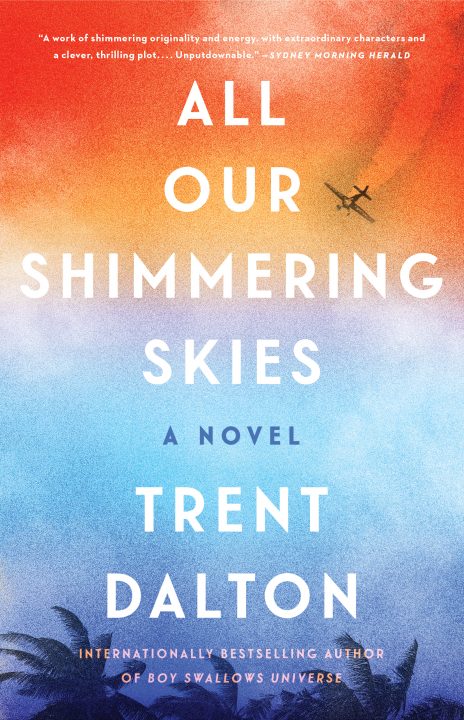 ALL OUR SHIMMERING SKIES

From the internationally bestselling and beloved author of the critically acclaimed Boy Swallows Universe, a mesmerizing, uplifting novel of adventure and unlikely friendships in World War II Australia—calling to mind The Wizard of Oz as directed by Baz Luhrmann.

Darwin, 1942. As Japanese bombs rain down on her hometown, newly orphaned Molly Hook looks to the skies and runs for her life. Inside a duffel bag, she carries a stone heart and a map that will lead her to Longcoat Bob, the deep-country sorcerer whom she believes cursed her family. Accompanying her are the most unlikely traveling companions: Greta,

From the internationally bestselling and beloved author of the critically acclaimed Boy Swallows Universe, a mesmerizing, uplifting novel of adventure and unlikely friendships in World War II Australia—calling to mind The Wizard of Oz as directed by Baz Luhrmann.

Darwin, 1942. As Japanese bombs rain down on her hometown, newly orphaned Molly Hook looks to the skies and runs for her life. Inside a duffel bag, she carries a stone heart and a map that will lead her to Longcoat Bob, the deep-country sorcerer whom she believes cursed her family. Accompanying her are the most unlikely traveling companions: Greta, a razor-tongued actress, and Yukio, a Japanese fighter pilot who’s abandoned his post.

With messages from the skies above to guide them towards treasure, but foes close on their trail, the trio will encounter the beauty and vastness of the Northern Territory and survive in ways they never thought possible.

A story about the gifts that fall from the sky, curses we dig from the earth, and secrets we bury inside ourselves, Trent Dalton’s brilliantly imagined novel is an odyssey of true love and grave danger, of darkness and light, of bones and blue heavens. It is a love letter to Australia and an ode to the art of looking up—a buoyant and magical tale, filled to the brim with warmth, wit, and wonder.

“A work of shimmering originality and energy, with extraordinary characters and a clever, thrilling plot. . . . unputdownable.” -Sydney Morning Herald

“A spellbinding saga of survival and transformation in WWII Australia. . . . This is a wonder.” –Publishers Weekly (starred review)

“Achingly beautiful and poetic in its melancholy, All Our Shimmering Skies is a majestic and riveting tale of curses and the true meaning of treasure.” -Booklist (starred review)

“Dalton is an author of 19th-century expansiveness, one with a sense that intelligence, talent for characterization and sheer narrative brio can still be the whole cloth of the writer’s ambition. . . . it is storytelling manna, fallen straight from the Territorian skies.” – The Australian

Molly and the Epitaph

A bull ant crawls across a curse. The bull ant’s head is blood red and it stops and starts and stops and starts and moves on through a chiseled gravestone letter C and Molly Hook, aged seven, wonders if the bull ant has ever been able to see the whole of the sky given all those magic gravity angles bull ants walk. And if it has no sky to see then she will make a sky for it. The bull ant follows the curved bottom of a U and moves to an R and winds through a twisting S and exits through an E.

Molly is the gravedigger girl. She’s heard people in town call her that. Poor little gravedigger girl. Mad little gravedigger girl. She leans on her shovel. It has a wooden handle as long as she is tall, with a wide dirt-stained sheet-steel blade with teeth on its sides for root cutting. Molly has given the shovel a name because she cares for it. She calls the shovel Bert because those side teeth remind her of the decaying and icicle-shaped fangs of Bert Green who runs the Sugar Lane lolly shop on Shepherd Street. Bert the shovel has helped dig twenty-six graves for her so far this year, her first year digging graves with her mother and father and uncle. Bert has killed a black whipsnake for her.

Molly’s bare feet are dirt-stained like the shovel face and there are copper-colored lines of cemetery clay where her elbows and knees bend. Molly, who is right to consider this rambling and run-down and near-dead cemetery her queendom, hops onto a slab of old black stone and kneels down to put a big blue eyeball up close to the crawling bull ant and she wonders if the ant can see the deep dark blues in her eyes and thinks that if the ant can see that kind of blue then maybe it will know what it feels like to see all of the vast blue sky over Darwin.

“Get off the grave, Molly.”

The sky is the color of 1936 and the sky is the color of October. Seen from the blue sky above and looking down and looking closer in and closer in, they are mother and daughter standing before a goldminer’s grave in the furthermost plot in the furthermost corner from the gravel entrance to Hollow Wood Cemetery. They are older and younger versions of themselves. Molly Hook with curled brown hair, bony and careless. Violet Hook with curled brown hair, bony and troubled. She’s holding something behind her back that her daughter is too busy, too Molly, to notice. Violet Hook, the gravedigger mum, always hiding something. Her shaking fingers, her thoughts. The gravedigger mum, burying dead bodies in the dirt and burying secrets alive inside herself. The gravedigger mum, walking upright but buried deep in thinking. She stands at the foot of the old limestone grave, gray stone weathered into black; porous and crumbling and ruined like the people who paid for the cheap graves in this cheap cemetery, and ruined like Aubrey Hook and his younger brother, Horace Hook—Molly’s father, Violet’s husband—the penniless drunkards who are tall and black-hatted and sweat-faced and rarely home. The black-eyed brothers who inherited this cemetery and who reluctantly keep its crooked and rusted gates open, overseeing cemetery business from the pubs and the gin bars in Darwin town and from a lamp-lit and worn red velvet lounge five miles away in the underground opium brothel beneath Eddie Loong’s sprawling workshed on Gardens Road, where he dries and salts the Northern Territory mullet he ships to Hong Kong.

Molly plants her right hand on the grave slab and, because she wants to and because she can, she spins off the gravestone into a series of twirls executed so wildly and so freely that she’s struck by a dizzy spell and has to turn her eyes to the sky to find her balance again. And she spots something up there.