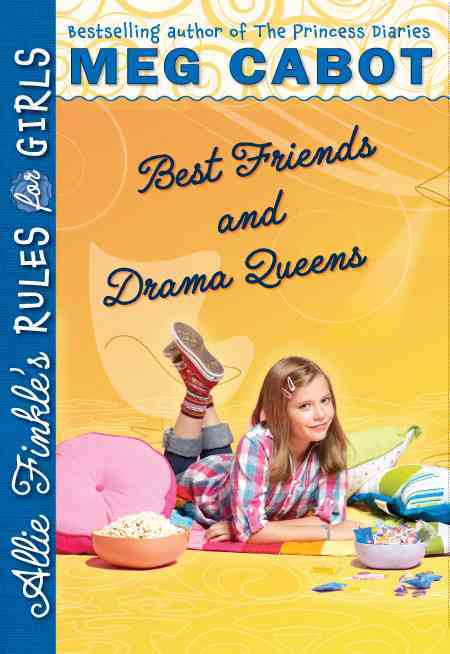 Allie Finkle is excited when a new girl joins her class at Pine Heights Elementary. Now Allie won’t be the new girl anymore! But her excitement turns to dismay when the new girl turns out to be a big bully.

Allie Finkle is excited when a new girl joins her class at Pine Heights Elementary. Now Allie won’t be the new girl anymore! But her excitement turns to dismay when the new girl turns out to be a big bully.

Meg Cabot is the author of Allie Finkle’s Rules for Girls as well as the New York Times bestselling Princess Diaries series, All-American Girl, Ready or Not, Teen Idol, Avalon High, How to Be Popular, Pants on Fire, Jinx, Airhead, The Mediator series, and the 1-800-Where-R-You series. Meg lives in both Key West, Florida, and New York City.

Allie’s second rule is “It’s okay to lie if the lie makes someone else feel better.” Have you ever lied to a friend because telling the truth would make him or her feel worse? Would you rather be told the truth (even though it might hurt) or a lie?

When Mrs. Hunter asks Allie to move to the back row to sit in-between a bunch of rowdy boys instead of with her best friends, Allie doesn’t want to go. But instead of speaking up about her true feelings, she agrees to move without a word. Do you think it would’ve been better for Allie to share her concerns with Mrs. Hunter? Why or why not?

From the day Cheyenne arrives in Mrs. Hunter’s class, she seems in control of herself. Confident. But she also acts pretty bossy, and sometimes a little mean. What was your first impression of Cheyenne? Did it change throughout the book?

Cheyenne is always calling Allie and her crew “immature” because she’s outgrown their idea of fun. In your opinion, is it more or less mature to do something even though you might not want to, just because it’s considered cool?

Allie and her crew have a blast at their slumber party, playing dress-up and Dance Party America, careening down the stairs while mattress surfing, and wolfing down gooey brownie soup and bites of homemade chocolate cake. If you could have the best slumber party ever, what kinds of activities would you plan? What tasty treats would you serve?

Allie adores the Boxcar Children series (and so does Joey Fields). What is your absolute, can’tlive- without favorite book (or books) and why would you recommend them to others?

After Allie’s mom finds Allie sulking in the closet, she offers to call Mrs. Hunter to discuss the Cheyenne situation. Allie doesn’t let her. What do you think about the way she handles this situation?

At the end of the book, Mrs. Hunter steps in and gives everyone in Room 209 a talking to. Do you understand the message she is trying to get across? Do you agree or disagree with the point she is trying to make?