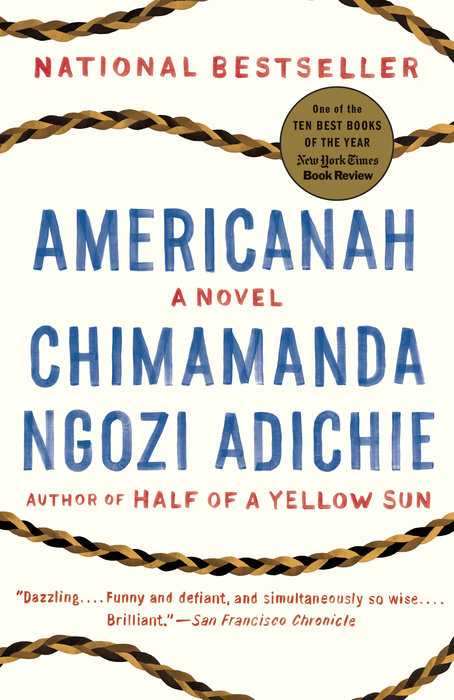 A powerful, tender story of race and identity by Chimamanda Ngozi Adichie, the award-winning author of Half of a Yellow Sun.

Ifemelu and Obinze are young and in love when they depart military-ruled Nigeria for the West. Beautiful, self-assured Ifemelu heads for America, where despite her academic success, she is forced to grapple with what it means to be black for the first time. Quiet, thoughtful Obinze had hoped to join her, but with post-9/11 America closed to him, he instead plunges into a dangerous, undocumented life in London. Fifteen years later, they reunite in a newly democratic Nigeria,

A powerful, tender story of race and identity by Chimamanda Ngozi Adichie, the award-winning author of Half of a Yellow Sun.

Ifemelu and Obinze are young and in love when they depart military-ruled Nigeria for the West. Beautiful, self-assured Ifemelu heads for America, where despite her academic success, she is forced to grapple with what it means to be black for the first time. Quiet, thoughtful Obinze had hoped to join her, but with post-9/11 America closed to him, he instead plunges into a dangerous, undocumented life in London. Fifteen years later, they reunite in a newly democratic Nigeria, and reignite their passion—for each other and for their homeland.

Chimamanda Ngozi Adichie grew up in Nigeria. Her work has been translated into thirty languages and has appeared in various publications, including The New Yorker, Granta, The O. Henry Prize Stories, The Financial Times, and Zoetrope: All-Story. She is the author of the novels Purple Hibiscus, which won the Commonwealth Writers’ Prize and the Hurston/Wright Legacy Award, and Half of a Yellow Sun, which won the Orange Prize and was a National Book Critics Circle Award Finalist, a New York Times Notable Book, and a People and Black Issues Book Review Best Book of the Year; and, most recently, the story collection The Thing Around Your Neck. A recipient of a MacArthur Fellowship, she divides her time between the United States and Nigeria.

“What’s as American as the invention of race? Self-invention. So we are reminded by Adichie’s engaging third novel . . . Adichie is uniquely positioned to compare racial hierarchies in the United States to social striving in her native Nigeria. She does so in this new work with a ruthless honesty about the ugly and beautiful sides of both nations. Americanah is social satire masquerading as romantic comedy. . . . Beyond race, the book is about the immigrant’s quest: self-invention, which is the American subject. Americanah is unique among the booming canon of immigrant literature of the last generation (including writers Junot Díaz, Jhumpa Lahiri, Gary Shteyngart, Chang-rae Lee, Dinaw Mengestu and Susan Choi). Its ultimate concern isn’t the challenge of becoming American or the hyphenation that requires, but the challenge of going back home. . . . Affecting.”—Emily Raboteau, The Washington Post

“Adichie’s brave, sprawling novel tackles the U.S. race complex with a directness and brio no U.S. writer of any color would risk. . . . There’s no question on this or any novel’s resolving [our] race sickness. If it’s so hard to say or do the right thing, what is to be done? [But] Americanah brings a cleansing frankness to a scab on the face of the Republic.”—John Timpane, Philadelphia Inquirer

“Adichie’s new novel is part love story, part social critique, and one of the best you’ll read this year. These characters are richly drawn, as are even those who make fleeting appearances, from the ladies at Ifemelu’s braid shop to Obinze’s boss in England. . . . Adichie digs in deeply, finding a way to make them fresh.”—Carolyn Kellogg, Los Angeles Times

1. The first part of Ifemelu’s story is told in flashback while she is having her hair braided at a salon before she returns to Nigeria. Why might Adichie have chosen this structure for storytelling? What happens when the narrator shifts to Obinze’s story? How conscious are you as a reader about the switches in narrative perspective?

2. The novel opens in the Ivy League enclave of Princeton, New Jersey. Ifemelu likes living there because “she could pretend to be someone else, . . . someone adorned with certainty” (3). But she has to go to the largely black city of Trenton, nearby, to have her hair braided. Does this movement between cities indicate a similar split within Ifemelu? Why does she decide to return to Nigeria after thirteen years in America?

3. How much does your own race affect the experience of reading this or any novel? Does race affect a reader’s ability to identify or empathize with the struggles of Ifemelu and Obinze? Ifemelu writes in her blog that “black people are not supposed to be angry about racism” because their anger makes whites uncomfortable (223). Do you agree?

4. Aunty Uju’s relationship with the General serves as an example of one mode of economic survival for a single woman: she attaches herself to a married man who supports her in return for sexual access. But Uju runs into a serious problem when the General dies and political power shifts. Why, given what you learn of Uju’s intelligence and capabilities later, do you think she chose to engage in this relationship with the General instead of remaining independent?

5. Ifemelu feels that Aunty Uju is too eager to capitulate to the demands of fitting in. Uju says, “You are in a country that is not your own. You do what you have to do if you want to succeed” (120). Is Uju right in compromising her own identity to a certain extent? How is Dike affected by his mother’s struggles?

6. In the clothing shop she visits with her friend Ginika, Ifemelu notices that the clerk, when asking which of the salespeople helped her, won’t say, “Was it the black girl or the white girl?” because that would be considered a racist way to identify people. “You’re supposed to pretend that you don’t notice certain things,” Ginika tells her (128). In your opinion and experience, is this a good example of American political correctness about race? Why does Ifemelu find it curious? Do you think these attitudes differ across the United States?

7. For a time, Ifemelu is a babysitter for Kimberly, a white woman who works for a charity in Africa. Adichie writes that “for a moment Ifemelu was sorry to have come from Africa, to be the reason that this beautiful woman, with her bleached teeth and bounteous hair, would have to dig deep to feel such pity, such hopelessness. She smiled brightly, hoping to make Kimberly feel better” (152). How well does Kimberly exemplify the liberal guilt that many white Americans feel toward Africa and Africans?

8. Ifemelu’s experience with the tennis coach is a low point in her life. Why does she avoid being in touch with Obinze afterward (157–58)? Why doesn’t she read his letters? How do you interpret her behavior?

9. In her effort to feel less like an outsider, Ifemelu begins faking an American accent. She feels triumphant when she can do it, and then feels ashamed and resolves to stop (175). Which aspects of her becoming an American are most difficult for Ifemelu as she struggles to figure out how much she will give up of her Nigerian self?

10. Ifemelu realizes that naturally kinky hair is a subject worth blogging about. She notices that Michelle Obama and Beyoncé never appear in public with natural hair. Why not? “Because, you see, it’s not professional, sophisticated, whatever, it’s just not damn normal” (299). Read the blog post “A Michelle Obama Shout-Out Plus Hair as Race Metaphor” (299–300), and discuss why hair is a useful way of examining race and culture.

11. What does Ifemelu find satisfying about her relationships with Curt and Blaine? Why does she, eventually, abandon each relationship? Is it possible that she needs to be with someone Nigerian, or does she simply need to be with Obinze?

12. Ifemelu’s blog is a venue for expressing her experience as an African immigrant and for provoking a conversation about race and migration. She says, “I discovered race in America and it fascinated me” (406). She asks, “How many other people had become black in America?” (298). Why is the blog so successful? Are there any real-life examples that you know of similar to this?

13. Obinze goes to London, and when his visa expires he is reduced to cleaning toilets (238); eventually he is deported. On his return home, “a new sadness blanketed him, the sadness of his coming days, when he would feel the world slightly off-kilter, his vision unfocused” (286). How does his experience in London affect the decisions he makes when he gets back to Lagos? Why does he marry Kosi? How do these choices and feelings compare to Ifemelu’s?

14. While she is involved with Curt, Ifemelu sleeps with a younger man in her building, out of curiosity. “There was something wrong with her. She did not know what it was but there was something wrong with her. A hunger, a restlessness. An incomplete knowledge of herself. The sense of something farther away, beyond her reach” (291–92). Is this a common feeling among young women in a universal sense, or is there something more significant in Ifemelu’s restlessness? What makes hers particular, if you feel it is?

15. When reading Obinze’s conversations with Ojiugo, his now-wealthy friend who has married an EU citizen, did you get the sense that those who emigrate lose something of themselves when they enter the competitive struggle in their new culture (Chapter 24), or is it more of a struggle to maintain that former self? Does Adichie suggest that this is a necessary sacrifice? Are all of the characters who leave Nigeria (such as Emenike, Aunty Uju, Bartholomew, and Ginika) similarly compromised?

16. Aunty Uju becomes a doctor in America but still feels the need to seek security through an alliance with Bartholomew, whom she doesn’t seem to love. Why might this be? How well does she understand what her son, Dike, is experiencing as a displaced, fatherless teenager? Why might Dike have attempted suicide?

17. Is the United States presented in generally positive or generally negative ways in Americanah?

18. The term “Americanah” is used for Nigerians who have been changed by having lived in America. Like those in the novel’s Nigerpolitan Club, they have become critical of their native land and culture: “They were sanctified, the returnees, back home with an extra gleaming layer” (408). Is the book’s title meant as a criticism of Ifemelu, or simply an accurate word for what she fears she will become (and others may think of her)?

19. How would you describe the qualities that Ifemelu and Obinze admire in each other? How does Adichie sustain the suspense about whether Ifemelu and Obinze will be together until the very last page? What, other than narrative suspense, might be the reason for Adichie’s choice in doing so? Would you consider their union the true homecoming, for both of them?

20. Why is it important to have the perspective of an African writer on race in America? How does reading the story make you more alert to race, and to the cultural identifications within races and mixed races? Did this novel enlarge your own perspective, and if so, how?