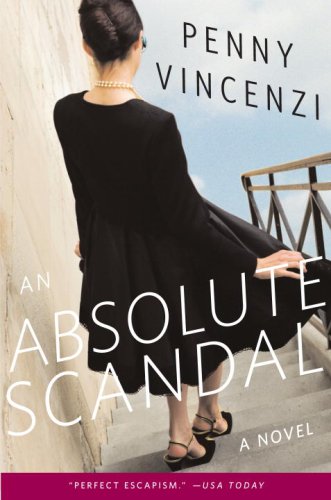 Penny Vincenzi, master of the contemporary blockbuster, returns with a moving, engaging portrait of people coping with a notorious financial disaster and its unpredictable emotional repercussions.

Set during the boom-and-bust years of the 1980s, An Absolute Scandal follows the lives of a group of people drawn together by their mutual monetary woes when the great financial institution Lloyd’s undergoes a devastating downturn. For Nigel Cowper, this means the destruction of his family business; his wife, Lucinda, is willing to do everything she can to help him—except give up her irresistible lover.

Penny Vincenzi, master of the contemporary blockbuster, returns with a moving, engaging portrait of people coping with a notorious financial disaster and its unpredictable emotional repercussions.

Set during the boom-and-bust years of the 1980s, An Absolute Scandal follows the lives of a group of people drawn together by their mutual monetary woes when the great financial institution Lloyd’s undergoes a devastating downturn. For Nigel Cowper, this means the destruction of his family business; his wife, Lucinda, is willing to do everything she can to help him—except give up her irresistible lover. The powerful, charismatic banker Simon Beaumont and his wife, a highly successful advertising executive, lose everything they worked so hard to acquire; but the ultimate tragedy is something that neither one could have anticipated. The well-to-do are not the only ones suffering: a self-sufficient widow is suddenly deep in debt; a single mother struggles to maintain a comfortable home for her children; and a schoolmaster and his frustrated wife find that financial problems deepen the cracks in their troubled marriage.

As their lives begin a downward spiral, these characters intersect in ways they never saw coming. Written in what has become her signature style of both wit and candor, Penny Vincenzi draws back the curtain and offers an inside view of the greed and social power plays that occur behind the closed doors of upper-crust society . . . where money isn’t everything. Sometimes, it’s the only thing.

Penny Vincenzi is the author of several bestsellers, including Sheer Abandon. She lives in London, England.

“Everything is outsized in Vincenzi’s fiction: sex, money, personality, emotions, plot. And yet she gets all the details—about human behavior and women’s conflicted lives—just right.”
—USA Today

Penny Vincenzi is poised to fill a gap in the American realm of Cinderella fiction. With so few current writers able to summon the quaint allure of such women’s fiction without stooping to sensationalism, Ms. Vincenzi really is an anomaly.” —Janet Maslin, New York Times

“Transcends the testosterone-drenched nature of a typical thriller, delivering vivid female characters through crisp, clean prose and in-depth coverage of their relationships, families and personal anxieties . . . fascinating. Sheer Abandon is what the British call hammock reading: a brick of a book to while away a country afternoon or two.” —More

What were your first impressions of the characters? How did your opinion of them shift throughout the novel? Which characters captured your imagination the most?

What are the main differences between Nigel and Blue? Why was Lucinda drawn to each of them, in different ways? How important is it for a couple to share similar economic and social backgrounds?

How does Flora’s personality affect her son’s marriage? Were you more sympathetic to Debbie or to Flora? What is the ideal role for in-laws and grandparents?

What sets Catherine apart from the other women in the book? What are her most endearing qualities? What keeps her from finding her Rochester (chapter 49) a bit sooner?

What do the children in An Absolute Scandal learn from their parents about weathering defeat and finding joy in life? What point of view will they bring to the twenty-first century?

What does Joel mean to Debbie, and vice versa? Why was Richard more likely to suspect her of having an affair with Simon than with Joel?

Discuss the 1980s as a character. What do you miss the most and the least about that decade? What makes it the perfect period for a novel about vanity and artifice? What does it mean for styles to evolve from Laura Ashley and shoulder pads to minimalist lines and shades of gray?

Were you familiar with the process of becoming a Name (i.e. insurance underwriter)? Would you have been swayed to become a Name? To what extent does the appearance of prestige or the hope of social status affect investors’ decisions? Are most investment decisions rational?

In chapter thirteen, Fiona boils the case down to two essentials: “Whether the inducement to you to become Names was reckless or not [and] whether it was fraudulent or not.” Do you believe the novel’s characters shared any responsibility for their financial demise, or does blame rest squarely on the shoulders of the fictional Lloyd’s characters invented by Penny Vincenzi?

Though An Absolute Scandal is entirely a work of fiction, many headlines in recent years have portrayed similar episodes of contemporary corporate corruption. Do you believe that legislation now protects investors better? What is the best way to safeguard against the Tim Allinsons of this world? How would your family be affected if your net worth suddenly plummeted far into the red? Which creature comforts would it be most difficult for you to part with?

What themes of attraction, power, and fate are woven into this and previous novels by Penny Vincenzi? In what ways does her storytelling turn real-life scenarios into thrilling out-of-this world escapades?