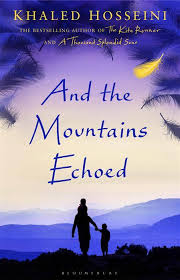 AND THE MOUNTAINS ECHOED

An unforgettable novel about finding a lost piece of yourself in someone else.

Khaled Hosseini, the #1 New York Times–bestselling author of The Kite Runner and A Thousand Splendid Suns, has written a new novel about how we love, how we take care of one another, and how the choices we make resonate through generations. In this tale revolving around not just parents and children but brothers and sisters, cousins and caretakers, Hosseini explores the many ways in which families nurture, wound, betray, honor, and sacrifice for one another;

An unforgettable novel about finding a lost piece of yourself in someone else.

Khaled Hosseini, the #1 New York Times–bestselling author of The Kite Runner and A Thousand Splendid Suns, has written a new novel about how we love, how we take care of one another, and how the choices we make resonate through generations. In this tale revolving around not just parents and children but brothers and sisters, cousins and caretakers, Hosseini explores the many ways in which families nurture, wound, betray, honor, and sacrifice for one another; and how often we are surprised by the actions of those closest to us, at the times that matter most. Following its characters and the ramifications of their lives and choices and loves around the globe—from Kabul to Paris to San Francisco to the Greek island of Tinos—the story expands gradually outward, becoming more emotionally complex and powerful with each turning page.

With more than ten million copies sold in the United States of The Kite Runner and A Thousand Splendid Suns, and more than thirty-eight million copies sold worldwide in more than seventy countries, Khaled Hosseini is one of most widely read and beloved novelists in the entire world. The Kite Runner spent 103 weeks on the New York Times bestseller list, and A Thousand Splendid Suns debuted as a #1 New York Times bestseller, remaining in the #1 spot for fifteen weeks, and spending nearly an entire year on the bestseller list. Hosseini is a Goodwill Envoy to the United Nations High Commissioner for Refugees, the UN Refugee Agency, and the founder of The Khaled Hosseini Foundation, a nonprofit which provides humanitarian assistance to the people of Afghanistan.

“Hosseini weaves a gorgeous tapestry of disparate characters joined by threads of blood and fate…In this uplifting and deeply satisfying book, Hosseini displays an optimism not so obvious in his previous works. Readers will be clamoring for it.”—Library Journal (starred review)

“Captivating and affecting…A masterful and compassionate storyteller, Hosseini traces the traumas and scarring of tyranny, war, crime, lies, and illness in the intricately interconnected, heartbreaking, and transcendent lives of his vibrantly realized characters to create a grand and encompassing tree of life.”—Booklist (starred review)

“The beautiful writing, full of universal truths of loss and identity, makes each section a jewel…Hosseini’s eye for detail and emotional geography makes this a haunting read.”—Publishers Weekly

And the Mountains Echoed introduces us to Saboor and his children Abdullah and Pari, and the shocking, heartbreaking event that divides them. From there, the book branches off to include multiple other characters and storylines before circling back to Abdullah and Pari. How do each of the other characters relate back to the original story? What themes is the author exploring by having these stories counterpoint one another?

Think of other sacrifices that are made throughout the book. Are there certain choices that are easier than others? Is Saboor’s sacrifice when he allows Pari to be adopted easier or more difficult than Parwana’s sacrifice of her sister? How are they similar and how are they different? Who else makes sacrifices in the book? What do you think the author is saying about the nature of the decisions we make in our lives and the ways in which they affect others?

“Out beyond ideas of wrongdoing and rightdoing, / there is a field. I’ll meet you there.” The author chose this thirteenth-century Rumi poem as the epigraph for the book. Discuss the novel in light of this poem. What do you think he is saying about rightdoing and wrongdoing in the lives of his characters, or in the world?

The book raises many deep questions about the wavering line between right and wrong, and whether it is possible to be purely “good”—or purely “bad.” What do you think after reading the novel: Are good intentions enough to create good deeds? Can positive actions come from selfish motivations? Can bad come from positive intent? How do you think this novel would define a good person? How would you define one?

Discuss the question of wrongdoing and rightdoing in the context of the different characters and their major dilemmas in the book: Saboor and his daughter Pari; Parwana and her sister, Masooma; the expats, Idris and Timur, and the injured girl, Roshi; Adel, his warlord father, and their interactions with Gholam and his father (and Abdullah’s half brother), Iqbal; Thalia and her mother. Do any of them regret the things they have done? What impact does it have on them?

The overlapping relationships of the different characters are complex and reflective of real life. Discuss the connections between the different characters, how they are made, grow, and are sustained. Consider all the ways in which an event in one of the families in the book can resonate in the lives of so many other characters. Can you name some examples?

Saboor’s bedtime story to his children opens the book. To what degree does this story help justify Saboor’s heart-wrenching act in the next chapter? In what ways do other characters in the novel use storytelling to help justify or interpret their own actions? Think about your own experiences. In what ways do you use stories to explain your own past?

Two homes form twin focal points for the novel: the family home of Saboor, Abdullah, and Pari—and later Iqbal and Gholam—in Shadbagh; and the grand house initially owned by Suleiman in Kabul. Compare the homes and the roles they play in the novel. Who has claims to each house? What are those claims based on? How do the questions of ownership complicate how the characters relate to one another?

The old oak tree in Shadbagh plays an important role for many different characters (Parwana, Masooma, Saboor, Abdullah, and Pari) during its life. What is its significance in the story? What do its branches represent? Why do you think Saboor cuts it down? How does its stump come back as an important landmark later on?

In addition to all of the important family relationships in the book, there are also many nongenetic bonds between characters, some of them just as strong. Discuss some of these specific relationships and what needs they fill. What are the differences between these family and nonfamily bonds? What do you think the author is trying to say about the presence of these relationships in our lives?

And the Mountains Echoed begins in Afghanistan, moves to Europe and Greece, and ends in California, gradually widening its perspective. What do you think the author was trying to accomplish by including so many different settings and nationalities? What elements of the characters’ different experiences would you say are universal? Do you think the characters themselves would see it that way?

Discuss the title, And the Mountains Echoed, and why you think it was chosen. Can you find examples of echoes or recurrences in the plot? In the structure of the storytelling?