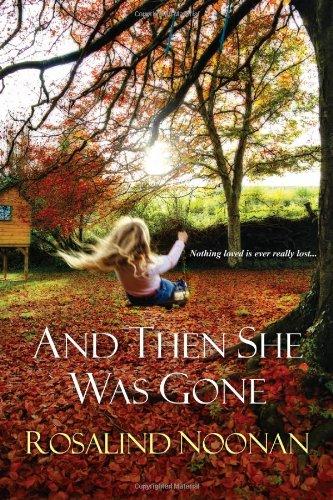 AND THEN SHE WAS GONE

Eleven-year-old Lauren O’Neil vanished one sunny afternoon as she walked home from school. Six years later, her parents Rachel and Dan still tirelessly scour their Oregon hometown and beyond, always believing Lauren will be found. Then one day, the call comes.

Lauren has been rescued from a secluded farm mere miles away, and her abductor has confessed. Yet her return is nothing like Rachel imagined. Though the revelations about what Lauren endured are shocking, most heartbreaking of all is to see the bright-eyed, assertive daughter she knew transformed into a wary, polite stranger.

Lauren’s first instinct is to flee.

Eleven-year-old Lauren O’Neil vanished one sunny afternoon as she walked home from school. Six years later, her parents Rachel and Dan still tirelessly scour their Oregon hometown and beyond, always believing Lauren will be found. Then one day, the call comes.

Lauren has been rescued from a secluded farm mere miles away, and her abductor has confessed. Yet her return is nothing like Rachel imagined. Though the revelations about what Lauren endured are shocking, most heartbreaking of all is to see the bright-eyed, assertive daughter she knew transformed into a wary, polite stranger.

Lauren’s first instinct is to flee. For years she’s been told her parents forgot her; now she doubts the pieces of her life can ever fit together again. But Rachel refuses to lose her a second time. Little by little they must relearn what it means to be a family, trusting that their bond is strong enough to guide them back to each other.

Intensely moving and absorbing, this is an extraordinary story told with sensitivity and grace, and filled with the depth and breadth of a mother’s love.

Rosalind Noonan is the New York Times and USA Today bestselling author of books and anthologies published by Kensington Books. She grew up in suburban Maryland on the outskirts of Washington, D.C.

After graduating from Wagner College in Staten Island, she remained in New York City where she was an editor at one of the country’s leading book publishing houses. Noonan currently lives in the Pacific Northwest with her husband, a retired cop from the NYPD, and two children. Although she sometimes misses the rapid pulse of New York City, she enjoys writing in the shade of towering two-hundred year old Douglas fir trees.

Her most recent publications include And Then She Was Gone and Sinister, which she wrote with bestselling authors Lisa Jackson and Nancy Bush.

“Noonan has a knack for page-turners and doesn’t disappoint.”—Publishers Weekly on All She Ever Wanted

“The author once again takes on an emotional topic with great sensitivity.”—Booklist on The Daughter She Used to Be

Although stranger abduction is one of a parent’s worst

nightmares, most abducted children are kidnapped by

their own parents or relatives. Are there ways that society

of “stranger danger” and allowing them a modicum

of trust toward their community.

Do you think Rachel’s decision to let Lauren walk home

from school was irresponsible? Have you ever made a

“responsible” choice that you regretted later?

Kidnapped at age eleven, Lauren was held captive in

of development she “missed” during that time. What life-defining

moments do you remember from your teenage

While in captivity, Lauren nurtured an idealized view of

What is the downside of looking for relationship

truths in shows like Full House and Seventh Heaven?

What positive values might these shows teach a child?

In the later years of her captivity, Lauren was not handcuffed

or locked inside by Kevin Hawkins. What kept

her from fleeing the compound?

Rachel believed that the terrible ordeal would be over once

her daughter was found. Instead, the young woman who

was rescued did not want to return to her family. What expectations

should society have toward recovered captives?

Should women of legal age be pressured to return to their

families of origin? Why or why not?

When Lauren tries to re-assimilate with her family, her

mother is the one person she finds it hard to bond with.

“I know Mom can be a pain in the ass,” Sierra tells

Lauren, “but she does mean well. She loves you a lot.”

Although Lauren knows this is true, the feelings of resentment

and betrayal prevail. Why does Lauren feel so

much anger toward her mother? Do you think Rachel’s

personality makes their breach worse, or does it help

them mend their relationship?

In therapy, Lauren learns about finding balance in life.

“Male and female, darkness and light, cold and hot, evil

and good. At first she had told Wynonna that she

wanted to be only yang, the sunny side of the slope. But

Wynonna pointed out that the sun always moves across

the slope, obscuring what was revealed and revealing

what was hidden.” Discuss the interplay between yin

and yang. Do you agree with Wynonna’s assertion that

“We appreciate the sunlight more when we’ve been living

In the past, conventional therapy has not worked for

Dan, who “was not an advocate of wasting time on a

shrink’s couch. Too invasive, too touchy-feely, and way

too expensive.” What elements of Wynonna’s program

appealed to him? How could conventional psychotherapy

be adapted to better suit clients?

skills as well as establishing a relationship of trust between

horse and rider. From playing ball with a horse to

teaching it how to deal with fear, what was the most interesting

aspect of this therapy for you?

What do you think Lauren will be doing five years after

the story ends? What sort of career/future do you envision

If you were producing And Then She Was Gone as a

movie, who would you cast as Lauren? What actress

has the nurturing quality and hard drive of Rachel?

Who do you see as Dan? Sometimes attractive villains

are the most devastating. Who would you cast as Kevin