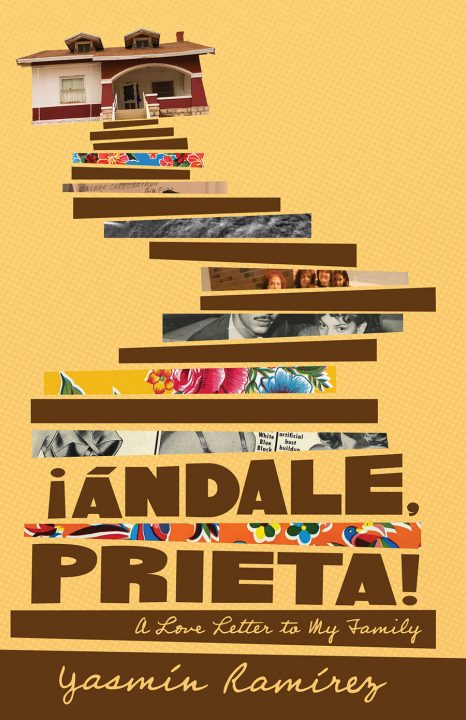 A Love Letter to My Family

Anchored by the tough grandmother who taught her how to stand firm and throw a punch,

Anchored by the tough grandmother who taught her how to stand firm and throw a punch, debut author Yasmín Ramírez writes about the punches life’s thrown her non-traditional family of tough Mexican American women.

Having spent years of her twenties feeling lost–working an intensely taxing retail job and turning to bars for comfort–the blow of her grandmother’s death pushes Yasmín to unravel. So she comes home to El Paso, Texas, where people know how to spell her accented name and her mother helps her figure out what to do with her life. Once she finally starts pursuing her passion for writing, Yasmín finds herself processing her grief by painting a portrait of her Ita, a resilient matriarch who was far from being a stereotypical abuelita. She remembers coming along to watch boxing matches at a dive bar as a child, Ita wistfully singing old Mexican classics, her mastectomy scar, and of course, her lesson on how to properly ball your fist for a good punch. Interviewing her mom and older sister, Yasmín learns even more about why her Ita was so tough–the abusive men, the toil of almost-literally back-breaking jobs, and the guilt of abortions that went against her culture.

Expertly blending the lyrical prose of a gifted author with the down-to-earth, conversational remarks of a close friend, this debut memoir marks Ramírez as a talented new author to watch. Her honesty in self-reflection, especially about periods where she felt directionless, and her vivid depictions of a mother and grandmother that persevered through a lot of hard knocks, offers vulnerable solidarity to readers who’ve had hard knocks of their own. Yasmín Ramírez is a 2021 Martha’s Vineyard Institute of Creative Writing Author Fellow as well as a 2020 recipient of the Woody and Gayle Hunt-Aspen Institute Fellowship Award. Her fiction and creative nonfiction works have appeared in Cream City Review and Huizache among others. She is an Assistant Professor of English, Creative Writing, and Chicanx Literature at El Paso Community College. She stays active in the Borderplex arts community and serves on the advisory board of BorderSenses, a literary non-profit. ¡Ándale, Prieta! is her first book.

“A promising debut, gripping in its honesty.”—Kirkus Reviews

3. Yasmín’s mother says, “‘The only person I can rely on is me.’” How does this reflect Yasmín’s childhood and her relationship with the people in her family?

4. How do scars play a role in the story? What do scars symbolize in ¡Ándale, Prieta!

7. Ita saw Tío as “man of the house.” Yasmín writes, “This Mexican tradition makes me cringe. It makes me wrinkle my nose at Ita because, as much as she went against the grain, she clung to this business about men.” What do you think she means by this? How does Ita dispel stereotypes throughout the book, but also continue perpetuating antiquated customs and beliefs?

9. Both Ita and Yasmín’s mother worked multiple jobs throughout their lives to support their families. How do you think this represents what women go through to take care of their families and children, both in their immediate community and across the world?

10. What does Angie represent in ¡Ándale, Prieta! What is Yasmín’s relationship like with Angie? How does Angie support, and also criticize, Yasmín throughout the story?

11. How does colorism and racism play a role in the story? Ita, as in many Latinx families, gives family members nicknames based on the tone of their skin. How does this reflect colorism as a whole? When Yasmín moves to Dallas, she experiences racism and prejudice. How does Yasmín describe what she has to go through?

12. The story is divided into two parts: “Finding Ita” and “Finding Yasmín.” How did this impact your reading of the story? Why do you think Yasmín decided to separate them into parts as an author?

13. Ita’s death impacts Yasmín in many ways. What does Yasmín go through after Ita dies? How does she process her death, and cope with her grief?

14. Compare Yasmín’s life in El Paso versus Dallas. What do both places represent to Yasmín? How does Yasmín feel when she moves to Dallas?

15. What kind of role does expectations about appearance play in the story? What are Ita’s expectations surrounding beauty? What about Yasmín’s?

16. The novel ends with Yasmín writing Ita’s story, with encouragement from her mother. How does this culmination represent Yasmín change and develop throughout the book?

17. Yasmín writes, “I think that many writers and storytellers believe that the stories that don’t want to be told—the ones that hurt down in the deep recesses of one’s soul or bring a wave of embarrassment and regret—are the ones that need to be shared.” Talk about what you think she means by this statement.

In this guest post, author Yasmín Ramírez describes how embracing her name helped embrace where she comes from and who she has become, tilde and all. Yasmín is a Martha’s Vineyard Institute of Creative Writing Author Fellow and recipient of the Woody and Gayle Hunt-Aspen Institute Fellowship Award.

I was three and a half when someone mispronounced my name for the first time. We were at a Christmas party at the El Paso Orthopedic Group, where my mom worked one of her part-time jobs as a bookkeeper. The office had been transformed into a holiday wonderland with bright multicolored lights and twinkling tinsel. The best part? Santa was passing out gifts to all the children.

A faux rosy-cheeked Santa held a wrapped rectangular box up in the air and called out, “Yes-man? Yes-man?”

After a moment, my mom raised her hand and pointed down at me. I looked up at her with wide eyes. They hadn’t called my name.

It’s at this part of the story my mom tells me I walked toward the Santa, put my hand on my hip, and said, “My name is Yas-mean!”

The room paused, then Santa grabbed at his belly, ho ho ho’ed, and everyone erupted in laughter. He didn’t attempt my name again.

Growing up, I was always the only Yasmín. At the time, some—cough—years ago, pre-Disney’s Princess Jasmine, no one had my name or its variation. Most of the time, people said my name correctly. Spanish speakers often tried to call me “Hass-mean,” which I hate to this day. “Ya! Yas-mean,” I reply every time. My mom tells me that my dad could never say my name. If I mine my memories, I think I hear, “Jess-mean,” but I could be making that up. Maybe that was a sign from the beginning.

When I moved to Dallas, it was the first time I’d heard my name pronounced “Yas-min.” The anglicized version sounded odd, but I was so overwhelmed by this new white space that I didn’t dare correct people. This is also where I became “Yas-min Ram-ear-ez” or “Yas-min Ram-rez.” I quickly acclimated as best as I could. In this place, only a handful of people said my name correctly. This was also when a Pakistani woman yelled at me at my first job in the Metroplex, a place called Garden Ridge.

“Yas-mean?” she asked as she read my nametag.

Shocked to hear my name pronounced correctly, my head popped up from scanning items, and I nodded like a bobble head.

“No,” I said with a shake as I scanned her glass candle holders.

She stayed quiet for a moment, but I felt her dark-eyed gaze hard on me as I continued to scan. My cheeks heated.

“You Pakistani!” she insisted.

Her blank gaze let me know she had no clue where my home was.

“El Paso. Near Mexico?” I pointed to myself, “Hispanic. Latina. Mexican?” I added, hoping this might ring a bell.

By this point, I had finished bagging her items, but she hadn’t made a move to leave. She squinted at me.

I backed away from her finger, “No!” I exclaimed, “Latina. Yas-mean Rah-me-rhez!”

She frowned and left, mumbling something under her breath in her native language. I moved to the next customer slowly, not entirely understanding what had happened. It was the first of many, many, many times I’d have to explain my ethnicity while living in Central Texas.

When I Google my name, it says, “The name Yasmin is a girl’s name of Arabic, Persian origin meaning “jasmine flower.” I don’t know how or why my mom picked the name Yasmín. In fact, for most of my life, I thought that the accent in my mom’s scrawled writing was a dot over both I’s. It wasn’t until I was working on a section of my memoir, ¡Ándale, Prieta!, that I learned of the accents.

“How do I write Yasmín phonetically?” I asked my partner.

I sat at the kitchen table, trying to write while he cooked dinner.

“I’m trying to show how people in Dallas said my name wrong.”

“Well, it’s because you don’t use the accent.”

I looked up from my laptop, “Accent?”

“En Yasmín there is a tilde on the i. There’s one on Ramírez, too, but the gringos Mexicanos don’t use tildes. That’s why no one knows where the emphasis is.”

I frowned, “There isn’t an accent on my name.”

He grinned and nodded, “There is.”

“Nope,” I leaned back in my chair and crossed my arms.

“Yup,” he mimicked back.

A few minutes later, I was on the phone with my mom, “But why didn’t you ever tell me there were accents on my name?!”

My partner’s smile couldn’t get any larger on his big smug head.

At first, I was hesitant to start using the accents on my name. I felt like an imposter. Yasmín was someone who had always been in touch with her Mexican culture. She knew how to write in Spanish and used tildes as easily and freely as salsa en sus tacos. Meanwhile, my whole life, I’d been Yasmin. La chica pocha, whose Spanish was so so on any given day and whose cheeks flushed when she fumbled over verb conjugations.

But, if I’ve learned anything from writing ¡Ándale, Prieta!, it’s that I come from generations of chingonas who aren’t afraid to tackle a thing. So, I started with the first and most important place. Social Media. Then I changed my website. Then I changed my email signature at work—until only the version of my name with tildes existed.

Using accents all the time is cumbersome. I’ve learned the PC short cuts to add them in, but on my main laptop, a Surface Pro, I have to manually change the language each time I want to use an accent. Sometimes, I don’t want to do it. I get lazy. Why does using accents on computers have to be so pinche hard? Then I think about the years I didn’t use them, and how writing ¡Ándale, Prieta! guided me down this path to who I’ve become, tilde and all.