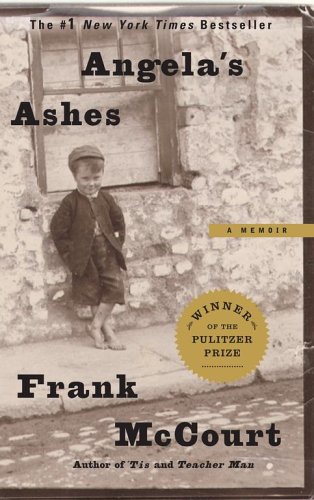 So begins the luminous memoir of Frank McCourt, born in Depression-era Brooklyn to recent Irish immigrants and raised in the slums of Limerick, Ireland. Frank’s mother, Angela, has no money to feed the children since Frank’s father, Malachy, rarely works, and when he does he drinks his wages.

So begins the luminous memoir of Frank McCourt, born in Depression-era Brooklyn to recent Irish immigrants and raised in the slums of Limerick, Ireland. Frank’s mother, Angela, has no money to feed the children since Frank’s father, Malachy, rarely works, and when he does he drinks his wages. Yet Malachy—exasperating, irresponsible, and beguiling—does nurture in Frank an appetite for the one thing he can provide: a story. Frank lives for his father’s tales of Cuchulain, who saved Ireland, and of the Angel on the Seventh Step, who brings his mother babies.

Perhaps it is story that accounts for Frank’s survival. Wearing rags for diapers, begging a pig’s head for Christmas dinner and gathering coal from the roadside to light a fire, Frank endures poverty, near-starvation and the casual cruelty of relatives and neighbors—yet lives to tell his tale with eloquence, exuberance, and remarkable forgiveness.

Angela’s Ashes, imbued on every page with Frank McCourt’s astounding humor and compassion, is a glorious book that bears all the marks of a classic.

Frank McCourt (1930-2009) was born in in Brooklyn, New York, to Irish immigrant parents, grew up in Limerick, Ireland, and returned to America in 1949. For thirty years he taught in New York City high schools. His first book, Angela’s Ashes, won the Pulitzer Prize, the National Book Critics Circle Award and the L.A. Times Book Award. In 2006, he won the prestigious Ellis Island Family Heritage Award for Exemplary Service in the Field of the Arts and the United Federation of Teachers John Dewey Award for Excellence in Educatio

“The reader of this stunning memoir can only hope that Mr. McCourt will set down the story of his subsequent adventures in America in another book. Angela’s Ashes is so good it deserves a sequel.”—Michiko Kakutani, The New York Times

“It is only the best storyteller who can so beguile his readers that he leaves them wanting more when he’s done. With Angela’s Ashes, McCourt proves himself one of the very best.”—Malcom Jones, Jr., Newsweek

Countless memoirs have been published recently, yet Angela’s Ashes stands out. What makes this memoir so unique and compelling?

Discuss the originality and immediacy of Frank McCourt’s voice and the style he employs — i.e., his sparing use of commas, the absence of quotation marks. How, through a child’s voice and perspective, does McCourt establish and maintain credibility?

McCourt writes: “I think my father is like the Holy Trinity with three people in him, the one in the morning with the paper, the one at night with the stories and prayers, and then the one who does the bad thing and comes home with the smell of whiskey and wants us to die for Ireland.” Was this your impression of Frank McCourt’s father? How can Frank write about his father without bitterness? What part did Malachy play in creating the person that Frank eventually became?

Women — in particular mothers — play a significant role in Angela’s Ashes. Recall the scenes between Angela and her children; the MacNamara sisters (Delia and Philomena) and Malachy; Aunt Aggie and young Frank; Angela and her own mother. In what ways do these interactions reflect the roles of women within their families? Discuss the ways in which Angela struggles to keep her family together in the most desperate of circumstances.

McCourt titles his memoir Angela’s Ashes, after his mother. What significance does the phrase “Angela’s Ashes” acquire by the end of the book?

Despite the McCourts’ horrid poverty, mind-numbing starvation, and devastating losses, Angela’s Ashes is not a tragic memoir. In fact, it is uplifting, triumphant even. How does McCourt accomplish this?

Irish songs and lyrics are prominently featured in Angela’s Ashes. How do these lyrics contribute to the unique voice of this memoir? How does music affect Frank’s experiences? How do you think it continues to influence his memories of his childhood?

Frank spent the first four years of his life in the United States. How do his experiences in America affect Frank’s years in Ireland?