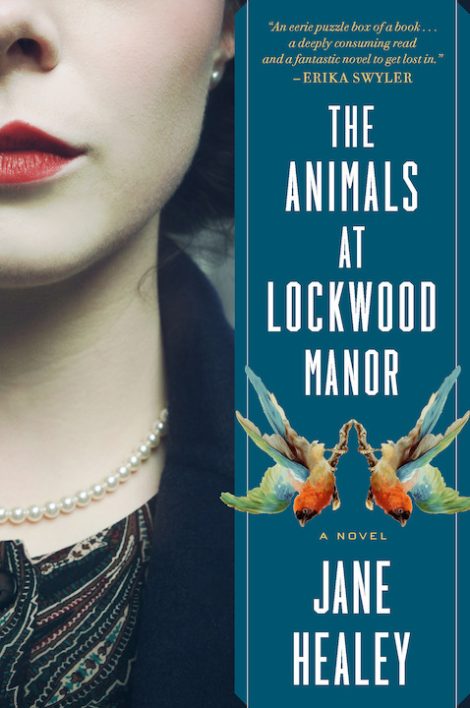 THE ANIMALS AT LOCKWOOD MANOR

A debut novel for fans of Sarah Perry and Kate Morton: when a young woman is tasked with safeguarding a natural history collection as it is spirited out of London during World War II, she discovers her new manor home is a place of secrets and terror instead of protection.

In August 1939, thirty-year-old Hetty Cartwright arrives at Lockwood Manor to oversee a natural history museum collection, whose contents have been taken out of London for safekeeping. She is unprepared for the scale of protecting her charges from party guests, wild animals, the elements, the tyrannical Major Lockwood and Luftwaffe bombs.

A debut novel for fans of Sarah Perry and Kate Morton: when a young woman is tasked with safeguarding a natural history collection as it is spirited out of London during World War II, she discovers her new manor home is a place of secrets and terror instead of protection.

In August 1939, thirty-year-old Hetty Cartwright arrives at Lockwood Manor to oversee a natural history museum collection, whose contents have been taken out of London for safekeeping. She is unprepared for the scale of protecting her charges from party guests, wild animals, the elements, the tyrannical Major Lockwood and Luftwaffe bombs. Most of all, she is unprepared for the beautiful and haunted Lucy Lockwood.

For Lucy, who has spent much of her life cloistered at Lockwood suffering from bad nerves, the arrival of the museum brings with it new freedoms. But it also resurfaces memories of her late mother, and nightmares in which Lucy roams Lockwood hunting for something she has lost.

When the animals appear to move of their own accord, and exhibits go missing, they begin to wonder what exactly it is that they might need protection from. And as the disasters mount up, it is not only Hetty’s future employment that is in danger, but her own sanity too. There’s something, or someone, in the house. Someone stalking her through its darkened corridors . . .

Jane Healey studied writing in the MFA program at CUNY Brooklyn College. Her short fiction has been shortlisted for the Bristol Short Story Prize, the Costa Short Story Award, and the Commonwealth Short Story Prize. The Animals at Lockwood Manor is her debut novel. She lives in Edinburgh.

A 2020 Most Anticipated, Angela Lashbrook for Medium
A March Indie Next Pick

“Healey looks back fondly at the tradition of spooky English country-house fiction while adding a few twists of her own…her depictions of the historical period and of the dread of anticipating full-scale war are vivid.” –Kirkus

“Jane Healey has created an eerie puzzle box of a book and a gothic in the tradition’s best sense. A fading great house filled with taxidermy is the perfect backdrop for Healey’s facile atmospheric prose, which brings to mind both Sarah Waters and Sarah Perry. Tense, broody, romantic and subversive, The Animals of Lockwood Manor is a deeply consuming read and a fantastic novel to get lost in.” –Erika Swyler, author of The Book of Speculation and Light from Other Stars

The mammals were being evacuated.

The foxes went first, in their cabinet with dust underneath so thick it was almost fur; next the jaguar with his toothy snarl; the collection of stouts, their bodies lovingly twisted into rictus shapes by the original taxidermist; the platypus in his box, who was first believed a hoax because of the strangeness of his features; the mastodon skull with the nasal hollow that once caused it to be mistaken for the Cyclops; and then the inky black panther, the melanistic Javan leopard, that had been my favourite since I first saw him as a child visiting the museum. I had taken great care tying him up in sacking and rope so that he would not be disturbed on the trip north, stroked his broad nose as if to reassure us both.

The animals and the fossils, the specimens of this fine natural history museum, were being dispersed across the country, each department bound for a different location, to save them from the threat of German bombs in London. The mammals were being evacuated to Lockwood Manor and I was accompanying them as assistant keeper, a position I had reached after a rapid series of promotions due to two senior male members of staff enlisting. I would be in charge there, the de facto director of my own small museum.

It was a position I might have thought forever beyond me only a year ago, when I had made one of those stupid human mistakes that threatens to undo everything you have ever worked towards in one fell swoop. I had been in one of the workrooms under the museum galleries late one afternoon, copying some faded labels for a collection of rodents that had been amassed during the journeys of an eminent evolutionary

theorist and which thus had historical as well as scientific importance. I also had the only fossil of an extinct horse species out next to them, ready to clean after I had finished the labels. I had skipped lunch that day, but then that was not out of the ordinary – I was often so fixated by my work that I forgot to eat the sandwiches I brought with me – and I was wearing an older, tired pair of shoes because my usual pair was being reheeled.

I had slipped as I returned from retrieving more ink, my leg buckling and my shoe skidding on a wooden floor polished by many years of footsteps, and I had knocked both the fossil and the two trays of rodents onto the floor and bashed my forehead on the table edge. But I cared not a jot for any injury I might have sustained as I stared in utter horror at the mess of specimens and labels – I had unpinned the latter from the box so that I could look more closely at them and now, separated from their specimens, the collection had been rendered almost useless. And then there was the shattered fossil. The other occupant of the room, a fellow mammal worker named John Vaughan who was the very last person I would wish as an audience for such an embarrassment because he was forever fond of making snide comments with prurient undertones about my being female, watched with a dark kind of smirk on his face.

What made my accident worse, as I was reminded during my interview the next day – and the particular tone used by Dr Farthing, the head of the department, when he said accident made it seem anything but – was that an American visitor was due to arrive any day to study the very fossil I had broken, a scientist who was as rich as those gentlemanly Victorian scientists of old and who the museum had been hoping to woo as a donor.

I had escaped with a reprimand that day – it would have been hard to fire me from my position since the museum was part of the civil service – but despite my exemplary work on every occasion bar that one disastrous afternoon, I knew that any slim chance of promotion had vanished. It was only the arrival of the war, the enlistment of Dr Farthing, and the anticipated conscription of the majority of the male members of staff (added to the fact that my wages as a woman were lower than a man’s, and the civil service was keener than ever at penny-pinching) that found me in the position of assistant keeper of the evacuated collection. But as Mr Vaughan had personally reminded me, before he left to join the Navy as his forebears had done during the last war, once this war was over things would be very different: They’ll have you back with the volunteers in no time, just you wait, were his exact words, by which he meant, back with the other women. There were only a handful of women on the permanent staff, and myself and Helen Winters were the only two who were not junior members. The rest of the women who worked for the museum – who prepared and assisted the mounting of specimens, who catalogued and copied and studied, who travelled and collected and made countless new small discoveries – were either ‘unofficial workers’ paid a measly one shilling an hour, or unpaid volunteers.

My directorship of the collection that was to be housed at Lockwood Manor was thus not only the chance of a lifetime as a member of my sex, but also a vital opportunity to prove myself for what came after the war, when all the men came flooding back to their old positions.

Plans for the evacuation of the mammal collection had been in place from the first murmurs of war, even before I had first joined the museum years ago, and we had spent weeks packing everything up for the workmen to carry into the trucks. But the museum was too large to evacuate in its entirety, and we had had to decide which animals, dried plants, rocks, birds, and insects would be transported and which would be left to their fate. We played God all the time at the museum; we named and classified and put the natural world into an order of our own making – family, species, genus – now we would decide which of our specimens were precious enough to be saved.

Although the collection at Lockwood Manor was only supposed to include mammals, other creatures soon snuck their way into the plans and onto the trucks. The telephone rang with calls from geologists and ornithologists already evacuated: could we please take the cabinet in room 204, could we fit in the box of nests from the Americas and the collection of ostrich eggs, the chunk of meteorite that was forgotten in the move, or the parrot stuffed by the venerable (and generous) Lady so-and-so? In the final week, items were still being found in corridors and misplaced rooms, their species hastily penned in handwritten addenda to the neatly typed lists we had previously prepared. And then at the last minute we had realized that we had one more truck to fill, and thus the workers carried out specimens from the entrance hall that were not at all rare in a hurried rush – the foxes, weasels, two tigers, a polar bear, a wolf, a lion, and even a plain brown rat.