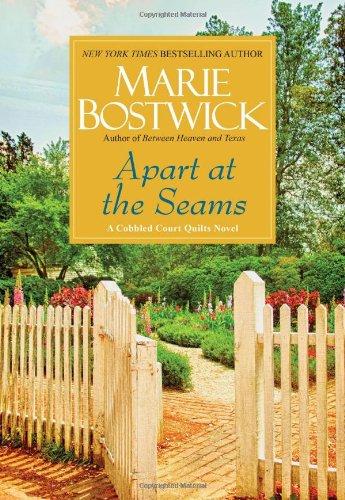 APART AT THE SEAMS

New York Times bestselling author Marie Bostwick welcomes readers back to picturesque New Bern, Connecticut–a perfect place for a woman whose marriage is in turmoil to discover a new pattern for living. . .

Twice in her life, college counselor Gayla Oliver fell in love at first sight. The first time was with Brian–a lean, longhaired, British bass player. Marriage followed quickly, then twins, and gradually their bohemian lifestyle gave way to busy careers in New York. Gayla's second love affair is with New Bern, Connecticut. Like Brian, the laid back town is charming without trying too hard.

New York Times bestselling author Marie Bostwick welcomes readers back to picturesque New Bern, Connecticut–a perfect place for a woman whose marriage is in turmoil to discover a new pattern for living. . .

Twice in her life, college counselor Gayla Oliver fell in love at first sight. The first time was with Brian–a lean, longhaired, British bass player. Marriage followed quickly, then twins, and gradually their bohemian lifestyle gave way to busy careers in New York. Gayla's second love affair is with New Bern, Connecticut. Like Brian, the laid back town is charming without trying too hard. It's the ideal place to buy a second home and reignite the spark in their twenty-six year marriage. Not that Gayla is worried. At least, not until she finds a discarded memo in which Brian admits to a past affair and suggests an amicable divorce.

Devastated, Gayla flees to New Bern. Though Brian insists he's since recommitted to his family, Gayla's feelings of betrayal may go too deep for forgiveness. Besides, her solo sabbatical is a chance to explore the creative impulses she sidelined long ago–quilting, gardening, and striking up new friendships with the women of the Cobbled Court circle–particularly Ivy, a single mother confronting fresh starts and past hurts of her own. With all of their support, Gayla just might find the courage to look ahead, decide which fragments of her old life she wants to keep, which are beyond repair–and how to knot the fraying ends until a bold new design reveals itself. . .

Marie Bostwick was born and raised in the northwest. In the three decades since her marriage, Marie and her family have moved frequently, living in eight different states at eighteen different addresses, three of them in Texas. These experiences have given Marie a unique perspective that enables her to write about people from all walks of life and corners of the country with insight and authenticity. Marie currently resides in Connecticut where she enjoys writing, spending time with family, helping out at church, gardening, collecting fabric, and stitching quilts.

“Readers won’t be able to resist rooting for Gayla…it will pull at the heartstrings.”—RT Book Reviews, 4.5 Stars TOP PICK!

When Gayla Oliver learns that her husband, Brian, has had

an affair, she points out that when the gossip mills start

churning in the wake of marital infidelity, someone always

says, “Well, she must have known. Down deep, she had to

have at least suspected.” Do you agree with that statement?

Do you believe people with cheating spouses actually know

way? Or do you think, as Gayla does, this is something that

people say to make themselves feel more secure in their own

relationships? Or does the truth lie somewhere in between?

Gayla learns about Brian’s affair and unhappiness in their

marriage when she stumbles upon a memo he wrote to her

but failed to send. Why do you think he did that? If he

changed his mind about divorce and never intended for her

to see the memo, why do you think he never deleted it? And

why, if he was so unhappy, didn’t he simply speak to her

about their problems? Was the memo his way of sorting out

his thoughts and desires? Or avoiding them?

Ivy Peterman is distressed when she learns that, according to

the law, her abusive ex-husband, Hodge, who is soon to be

released from prison, has a right to be reunited with his children.

What do you think of these types of laws? Should parents

with records of abuse be allowed contact with their

In these instances, should children have a right to

refuse to see their parents? If so, at what age and under what

In spite of an understandable wariness about entering into a

new relationship, Ivy, after spending so many years alone,

decides to give speed dating a try. If you’ve been married or

in an exclusive relationship for a very long time, how do you

think you’d feel about dating again? Do you think the process

of meeting new romantic partners is something that would be

fun? Anxiety producing? Something that you’d never do in a

million years? If you’re on the dating scene now or have

been in the past couple of years, what do you think is the

best way to meet new people? And for everyone, can you recall

the best date you’ve ever been on? The worst?

Looking for a way to explain her sudden appearance in New

Bern without giving away too much about her personal life,

Gayla tells Tessa and the other women of the Cobbled Court

Quilt Circle that she is taking a “sabbatical” and using the

found the time for. What about you? If you could take a sabbatical

from everyday life, what things would you want to

try? Would you take up a new hobby or sport? Take an exotic

vacation? Go back to school?

Think about the list you created in response to the previous

question. Obviously, there may be financial, vocational, or

lifestyle factors that would keep you from taking up some of

those activities now, but can you also identify items on the

list that you could try now or in the near future? What obstacles

are standing in your way? Can you think of ways to

overcome those obstacles? Are you ready to do so?

In the story, Gayla has to wrestle with a very fundamental

question: Is it possible for a marriage to survive in the aftermath

that a man who cheats once will cheat again. Brian, Gayla’s

husband, says yes, believing that they can work through

their problems and give the marriage a second chance. Gayla

isn’t so sure. What do you think? In cases of infidelity, is divorce

the best or only option? Why? Or do you believe that

couples should stay together no matter what, even if one of

them has been unfaithful? Or do you believe that, when

somebody cheats, the couple should stay together only under

certain conditions? What are they?

Overwhelmed by emotions she seems unable to control,

Gayla stumbles upon an unusual but effective method for

dealing with her anger—smashing dishes against a stone

wall. What do you do when you’re angry or frustrated? How

is that working for you? Do you think there could be a more

constructive way of handling your emotions?

Gayla and Brian originally bought the cottage in New Bern

because they hoped it would give them a means of staying

connected as a couple during a challenging season in their

careers. While it didn’t work out the way they’d hoped, at

least not at first, it wasn’t necessarily a bad idea. What about

you? Do you and your spouse or partner have a special place

you like to go together? Someplace that helps you clear your

When Brian suggests dating as a means of healing their broken

to go along with his plan, quickly realizing that she doesn’t

know her husband as well as she thought she did. If you’ve

been married or in a relationship for a long time, what suggestions

do you have for keeping the interest and romance

alive for the long haul?

Gayla knows that if she hopes to repair her broken marriage,

she has to find a way to forgive Brian, but it isn’t easy. When

someone we love hurts us deeply, it can be very hard to move

past the hurt and truly forgive. Some people, like Lanie,

would say it’s impossible, even foolish, and that people who

do so are just setting themselves up to be hurt again. On the

other hand, Philippa believes forgiving is the only way to

free ourselves from the worry and anxiety of past hurts,

telling Gayla that, “every debt we choose to hold on to actually has a hold on us.” What do you think? Do you agree

with Lanie? Or with Philippa? This may not be an answer

you wish to share with the group, but did reading the story

remind you of any half-healed hurts in your own life? Is

there someone you need to forgive? What difference would

it make in your life if you were able to do that? Or perhaps

ask forgiveness. Are you ready to do so?