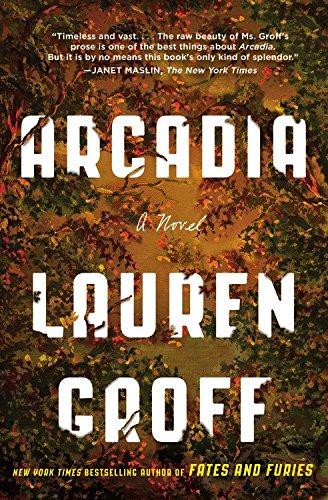 From the bestselling author of The Monsters of Templeton comes a lyrical and gripping story of a great American dream.

In the fields of western New York State in the 1970s, a few dozen idealists set out to live off the land, founding what would become a commune centered on the grounds of a decaying mansion called Arcadia House. Arcadia follows this romantic, rollicking, and tragic utopian dream from its hopeful start through its heyday and after.

Arcadia’s inhabitants include Handy, a musician and the group’s charismatic leader; Astrid, a midwife; Abe,

From the bestselling author of The Monsters of Templeton comes a lyrical and gripping story of a great American dream.

In the fields of western New York State in the 1970s, a few dozen idealists set out to live off the land, founding what would become a commune centered on the grounds of a decaying mansion called Arcadia House. Arcadia follows this romantic, rollicking, and tragic utopian dream from its hopeful start through its heyday and after.

Arcadia’s inhabitants include Handy, a musician and the group’s charismatic leader; Astrid, a midwife; Abe, a master carpenter; Hannah, a baker and historian; and Abe and Hannah’s only child, the book’s protagonist, Bit, who is born soon after the commune is created.

While Arcadia rises and falls, Bit, too, ages and changes. If he remains in love with the peaceful agrarian life in Arcadia and deeply attached to its residents—including Handy and Astrid’s lithe and deeply troubled daughter, Helle—how can Bit become his own man? How will he make his way through life and the world outside of Arcadia where he must eventually live?

With Arcadia, her first novel since her lauded debut, The Monsters of Templeton, Lauren Groff establishes herself not only as one of the most gifted young fiction writers at work today but also as one of our most accomplished literary artists.

Lauren Groff is the author of the New York Times bestselling novel The Monsters of Templeton and the critically acclaimed short story collection Delicate Edible Birds. She has won Pushcart and PEN/O. Henry prizes, and has been shortlisted for the Orange Prize for New Writers. Her stories have appeared in publications including The New Yorker, The Atlantic, One Story, and Ploughshares, and have been anthologized in Best American Short Stories 2007 and 2010, and Best New American Voices 2008. She lives in Gainesville, Florida, with her husband and two sons.

“Richly peopled and ambitious and oh, so lovely, Lauren Groff’s Arcadia is one of the most moving and satisfying novels I’ve read in a long time. It’s not possible to write any better without showing off.”—Richard Russo, author of the novel That Old Cape Magic and the Pulitzer Prize–winning Empire Falls

“Part Stone Diaries, part Lord of the Flies, part something out of a Shakespearean tragedy, Lauren Groff’s Arcadia is so uniquely absorbing that you finish it as if waking from a dream. Groff is one of our most talented writers, and Arcadia one of the most revelatory, magical, and ambitious novels I’ve read in years.”—Kate Walbert, author of the New York Times bestselling novel A Short History of Women

“Arcadia feels true, as do the characters who populate this extraordinary novel, which lingers on passing moments in time and highlights the importance of place in preserving not only our memories, but also ourselves.”—Hannah Tinti, author of the bestselling and award-winning novel The Good Thief

Thinking of Arcadia at its best moments, which of its values and tenets seem healthy and important for an individual? For a social group?

What are the potential threats—from within the organization and without—to such a communal social structure? How might these be guarded against or managed?

What’s healthy or not for children being raised in an environment such as Arcadia? Consider the different ways Bit and Helle think about their upbringing.

As a young man, Bit quotes George Eliot’s statement “That by desiring what is perfectly good, even when we don’t quite know what it is . . . we are part of the divine power against evil” (121). Where can you find examples of this being put into action in the novel? What might this mean for your own life?

Why is private property not allowed in Arcadia? What effect do you think this has on the identities of those living or raised there? How much of your identity comes from things you’ve purchased? What elements of your identity are independent of what you own?

Late in the story, there is a confrontation between Handy, Arcadia’s founder, and Abe, one of its leaders (123). How are these two men different? In what ways are they successful or failed leaders? To what extent does someone’s personal or private life affect his or her ability to lead?

Consider the long span of Hannah’s life. What have been her strengths and weaknesses as a member of Arcadia? As a wife? Does her admission to Abe that he always gets what he wants, for example, suggest strength or dependency?

What has Hannah been like as a mother to Bit? What healthy and positive effects has she had on his growth and development? What qualities does he possess as a man or a father that we can attribute to Hannah? Late in the novel, Bit confronts his mother about the profound difficulties her depression caused him as a boy (250). What were the long-term effects of this on the kind of person Bit becomes?

Consider the various uses of pharmaceuticals and other drugs in the novel: the Trippies’ permanent damage due to LSD; marijuana as recreation or economic crop; the medication that Hannah is on most of her adult life to adjust the “brain chemistry” that causes her depression. How do we determine which are healthy and which are not? What do you make of Abe’s statement that growing marijuana to raise money is “not legal” but not necessarily wrong either (90)?

One of Bit’s responses to his mother’s deep depression is to decide he needs a Quest (65). How does that idea serve him? Real or imagined, how might a Quest be psychologically important or effective as a response to emotional difficulty?

Verda plays a significant role in Bit’s life, first as the seeming focus of his Quest, as the old, magical witch in the woods who might give the “curse or antidote” to help his mother (68). Soon, though, she becomes someone Bit visits and needs in a more realistic way. What does she offer him that is so valuable? In what ways is she different from many of the women in the novel?

Consider the complex character that is Helle: her precocious behavior when young; the confrontation with Handy, her father (112); her disturbing sexual encounter in the woods (144); her vague, apologetic explanation to Bit, “I thought you knew who I was” (156); and her return and relationship much later with Bit, the birth of Grete, and her eventual disappearance. What do you understand about her nature and behavior?

On the final page of the novel, we’re told that Bit “has always loved the voices of women” (289). Consider the various women who gather to help when Hannah falls ill: Astrid; Luisa, the nurse; Dr. Ellis Keefe. What valuable qualities does each of these women possess? In what ways are they different?

What effect does Groff’s decision to include the SARI pandemic have on the story?

Bit challenges his students to take what he calls a “digital fast,” going without any electronic communication technology (cell phone, computers, GPS, etc.) for as long as possible. Try it. Go for twelve hours. Keep track and write down the various responses and realizations you have. Afterward, assess the benefits and dangers and what you think a healthy relationship with such technologies might be.

On page 193, Bit recalls how, as a boy, he made lists of beautiful things, a “litany” he would whisper to his mother to try to stir her out of depressive sleep. As an adult, in the midst of his troubles with his mother and wife, he does so again, this time for himself. Read his, and then try to make your own. Be specific to your personal experience. Then consider how such a gesture affects you and what role it might play in our everyday lives.