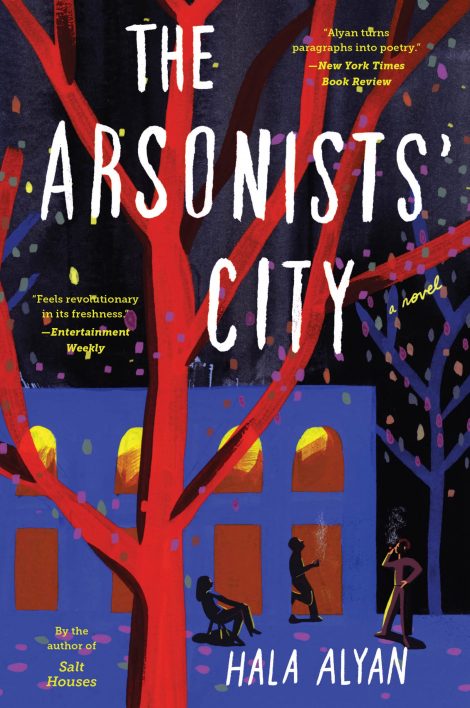 A rich family story, a personal look at the legacy of war in the Middle East, and an indelible rendering of how we hold on to the people and places we call home

The Nasr family is spread across the globe—Beirut, Brooklyn, Austin, the California desert. A Syrian mother, a Lebanese father, and three American children: all have lived a life of migration. Still, they’ve always had their ancestral home in Beirut—a constant touchstone—and the complicated, messy family love that binds them. But following his father’s recent death, Idris, the family’s new patriarch, has decided to sell.

The decision brings the family to Beirut,

A rich family story, a personal look at the legacy of war in the Middle East, and an indelible rendering of how we hold on to the people and places we call home

The Nasr family is spread across the globe—Beirut, Brooklyn, Austin, the California desert. A Syrian mother, a Lebanese father, and three American children: all have lived a life of migration. Still, they’ve always had their ancestral home in Beirut—a constant touchstone—and the complicated, messy family love that binds them. But following his father’s recent death, Idris, the family’s new patriarch, has decided to sell.

The decision brings the family to Beirut, where everyone unites against Idris in a fight to save the house. They all have secrets—lost loves, bitter jealousies, abandoned passions, deep-set shame—that distance has helped smother. But in a city smoldering with the legacy of war, an ongoing flow of refugees, religious tension, and political protest, those secrets ignite, imperiling the fragile ties that hold this family together.

In a novel teeming with wisdom, warmth, and characters born of remarkable human insight, award-winning author Hala Alyan shows us again that “fiction is often the best filter for the real world around us” (NPR).

Hala Alyan is the author of the novel Salt Houses, winner of the Dayton Literary Peace Prize and the Arab American Book Award and a finalist for the Chautauqua Prize, as well as the novel The Arsonists’ City and four award-winning collections of poetry, most recently The Twenty-Ninth Year. Her work has been published by The New Yorker, the Academy of American Poets, LitHub, the New York Times Book Review, and Guernica. She lives in Brooklyn with her husband, where she works as a clinical psychologist.

“Breathless…Alyan plants the riches of the city with stealthy precision, making the maddening conundrum of Beirut yours…From Lebanon, we visit Syria. We reach back to Palestine. The three nations mirror the imperfect, strained yet inextricable relationship of the Nasr children, now adults…Alyan distilled the fog of displacement and exposes the ways an unfamiliar culture can devour the traits that make us special. And when plumbing the intricacies of race and womanhood, Alyan turns paragraphs into poetry.” —New York Times Book Review

“Feels revolutionary in its freshness…The book has all the elements we expect from a family saga, but set against the backdrop of Lebanon’s long, sad history, the narrative stakes are so much higher.” —Entertainment Weekly

“Beautifully illustrating the complexities, fragilities and flaws of families, this heartfelt novel centers siblings struggling to make a decision about the sale of the family home in Beirut as secrets, bonds and the legacies of war come to the fore.” —Ms. Magazine

“I didn’t think I could love The Arsonists’ City as much as Salt Houses, but I did. It was sharp, thought-provoking. I couldn’t put it down. Hala Alyan is a lyrical force, a much-needed Arab American voice.” —Etaf Rum, New York Times best-selling author of A Woman Is No Man

“I don’t exactly understand how Hala Alyan does it—conjures love, sorrow, betrayal, and joy; goes from being funny and warm to incisive and thoughtful—but as a reader, I’m glad that she does. The Arsonists’ City delivers all the pleasures of a good old-fashioned saga but in Alyan’s hands, one family’s tale becomes the story of a nation—Lebanon and Syria, yes, but also the United States. It’s the kind of book we are lucky to have.” —Rumaan Alam, author of Leave the World Behind

1. Consider the author’s technique of opening the book with a death, and then having it return much later in the story. How does it illustrate the tenacity of the past, and its long-felt repercussions?

2. Compare the conversations of Ava in her Brooklyn social circle near the opening of the book to the conversations with, for example, Naj at the gallery opening in Beirut, or Tarek and Mazna during her theater rehearsals in Damascus. What differences and similarities exist between the interactions in terms of subject and how individuals express themselves?

3. Consider the various reasons why members of the Nasr family choose to live where they do. How does this relate more broadly to reasons why people are forced to leave their countries, or why they remain?

4. Both Mazna and Mimi fear the failure of their artistic hopes. What circumstances lead each to not realize their dreams? Discuss examples from your own creative, educational, or professional pursuits that did not work out.

5. Life in Beirut continues in the midst of war and cultural strife, both in the historic chapters following Mazna’s life and in the contemporary ones featuring Naj and the entire family. How does an idea of war-affected areas being all dangerous or all safe—wholly one or the other—become complicated by these daily routines continuing in the midst of conflict?

6. Consider Kit’s comment that “All brown women look alike” (336). How is this generalization reinforced not only by the community of Blythe and others similar to it, but by the US film industry?

7. What do the trials of Ava and Nate, Harper and Mimi, Naj and Fee, and Idris and Mazna teach us about navigating relationships, and the dishonesty, forgiveness, and compromise that they often involve? What keeps the core relationship between Idris and Mazna going for decades, despite its difficulties?

8. Harper says at one point, in response to the children’s investigation of their parents’ past: “I think people deserve to have their secrets” (387). Do you agree with Harper? When is it right to respect another’s secrets, and when is it right to try to uncover them?

9. Idris and Mazna both decide not to share important information with the other at crucial moments: Idris lies to the film director, and Mazna stays silent about Ava. Do you agree with their decisions? Are both examples of what Harper calls “unburdening” a partner, by at times choosing to say nothing?

10. In what ways does the city of Beirut mirror the family, in terms of the turmoil, the inseparable mix of cultures, and the struggle between past and future?

Tonight the man will die. In some ways, the city already seems resigned to it, the Beirut dusk uncharacteristically flat, cloudy, a peculiar staleness rippling through the trees like wind. It’s easy to costume the earth for grief, and tonight the birds perched upon the tangled electricity wires look like mourners in their black and white feathers, staring down at the concrete refugee camps without song.

There are orange trees in the courtyard, planted by the children the previous year; the NGO workers had wanted something bright and encouraged the youngest children to tie cheap ribbons to the branches, but they’d forgotten about the muddy season, and now the ribbons flap limply, streaked in dirt.

The man himself—Zakaria—knows it, or doesn’t. He notices the queer feeling of the camps, the way his mother’s makloubeh tastes perfectly fine but seems to be saltless, the meat stringier than usual. His sisters are gathered in the living room, cross-legged on the carpet, his mother’s mother’s carpet, the one that earned them a cuff on the ear back when they were children if they dropped crumbs or spilled Coke on it. You think my mama, Allah rest her soul, Allah take her and Allah keep her, hauled this on her back, her back, all the way from Jerusalem to Ramallah to Amman to this godforsaken armpit of the world so that her heathen grandchildren could spill soda on it? His mother hates the camps, hates Beirut, all of Lebanon, hates their neighbors, the aunties with their tattling and boring lives, always reminding her children, We used to have gardens in Palestine, trees that belonged to us.

His sisters are watching an Egyptian soap opera, one of their favorites, the one where the ingénue is kept from her love interest by his wicked mother. The screen is cracked from where one of his sisters—they always disagree about which one—threw a curling iron at it years ago, and it slices the starlet’s torso in two as she cries on a park bench.

“What’s wrong with you today?” Zakaria’s mother asks him.

“Nothing,” he lies. “I’m just not hungry.” The truth is he’s distracted. Something is nagging at him as it does when he forgets a song, the wispiest tune tugging at him. He thinks of the house across the city, the one where his mother has worked as a housekeeper for twenty years, the one he spent countless afternoons playing in as a boy with the son of the owner, the courtyard they’d transform into a battlefield, an ocean of sharks, lava. Idris was his first friend, his closest friend.

Whenever Zakaria thinks of the house, he sees it at dawn, the hour his mother would arrive for her daily duties after taking two buses from the south and walking from the final bus stop through the West Beirut streets, ignoring the vendors selling cigarettes and that sweet candy that made his teethe ache, to reach the gate, always latched, always easily unlocked.

He loved playing with Idris, of course, but he also loved those first couple of hours when the house was still quiet with the sleeping family, when his mother would fill buckets with warm soapy water to toss across the veranda, take down clothes she’d hung to dry in the garden the day before, whispering to him, “Silent as a mouse.” When he was alone in the courtyard, it became his; he was the ruler of this inexplicable, beautiful place, a house with four bedrooms, bathtub faucets the shape of swans’ necks.

Tonight he feels the house beckoning him with an invisible hand, feels greedy for those rooms, the silk-soft sheets that he’d slept in many times. But his best friend isn’t speaking to him, their recent fight still raw as a burn, the insults they’d hurled at each other still echoing, each saying and not-saying the truth.

“You know what you did,” Idris had finally said. “I trusted you. I’ve always trusted you.”

Zakaria had fallen silent at that. He felt guilty and yet also unrepentant—how to apologize for the only truly good thing that’d ever happened to him?—which Idris had sniffed out like a dog. He’d called him a traitor.

“Not even a little plate?” his mother asks now, interrupting his thoughts.

“I’m just not hungry,” Zakaria repeats. To stave off further questions, he tries to appear absorbed in the soap opera that his sisters, sprawled on the large sofa, are watching. The three girls are younger than him, all unmarried, with large noses and dark curly hair. They are branches of the same tree, rooted and yet always apart from him.

He must fall asleep at some point.