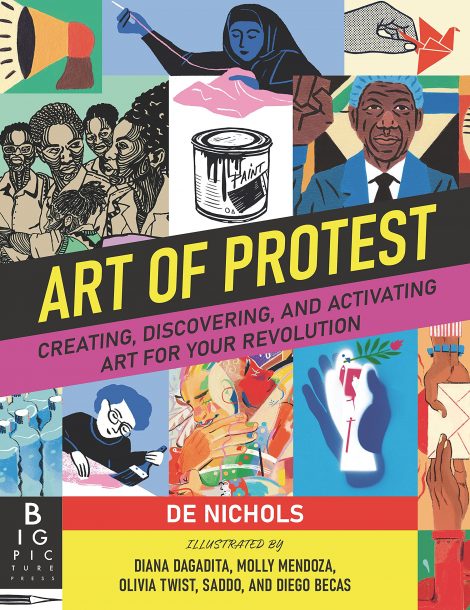 Creating, Discovering, and Activating Art for Your Revolution

From the psychedelic typography used in “Make Love Not War” posters of the ’60s to the solitary raised fist, some of the most memorable and striking protest artwork from across the world and throughout history deserves a long, hard look. Readers can explore each piece of art to understand how color, symbolism, technique, and typography play an important role in communication. Guided by activist, lecturer, and speaker De Nichols’s powerful narrative and stunningly illustrated by a collaboration of young artists, this volume also has plenty of tips and ideas for creating your own revolutionary designs. This is a fully comprehensive look at the art of protest.

From the psychedelic typography used in “Make Love Not War” posters of the ’60s to the solitary raised fist, some of the most memorable and striking protest artwork from across the world and throughout history deserves a long, hard look. Readers can explore each piece of art to understand how color, symbolism, technique, and typography play an important role in communication. Guided by activist, lecturer, and speaker De Nichols’s powerful narrative and stunningly illustrated by a collaboration of young artists, this volume also has plenty of tips and ideas for creating your own revolutionary designs. This is a fully comprehensive look at the art of protest.

From Keith Haring to Extinction Rebellion, the civil rights movement to Black Lives Matter, what does a revolution look like? Discover the power of words and images in this thought-provoking look at protest art by highly acclaimed artivist De Nichols. 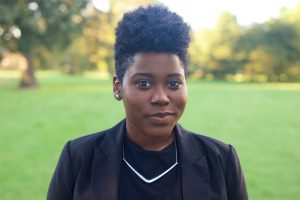 De Nichols is currently a Loeb Fellow in residence at Harvard University’s Graduate School of Design. As an arts-based organizer, social impact designer, serial entrepreneur, and keynote lecturer, she’s mobilized change-makers nationwide to develop creative approaches to the social, civic, and racial justice issues that matter most within communities. One of her most celebrated works, The Mirror Casket, was cited in an article by Angela Davis entitled “The Art of Protest.”

Diana Dagadita is a graduate of Solent University in the UK, where they studied illustration. They’re a freelance illustrator and printmaker currently living in London. Their first book, Printer’s ABC, was published in 2019.

Olivia Twist is a London-based illustrator, arts facilitator, and lecturer who graduated from the Royal College of Art in the UK with an MA in Visual Communication. She won the Quentin Blake Narrative Drawing Prize in 2017, and was also featured in Taschen’s 2019 Best 100 Illustrators From Around the World. She has been commissioned for the Wellcome Collection.

Molly Mendoza has a BFA from the Pacific Northwest College of Art and is a recipient of the RockStar Games Award from the 2015 Society of Illustrators Student Competition. Her first graphic novel, Skip, was published in 2019. She lives in Portland, Oregon.

Saddo is the pseudonym of Raul Oprea, a contemporary painter, muralist, and illustrator who has exhibited his work in galleries all over the world, including his home country, Romania, as well as in the United States, Canada, Austria, Denmark, and El Salvador. He was the founding member of the Playground, one of Romania’s first street art groups.

Diego Becas is an illustrator, designer, and multidisciplinary graphic artist based in Santiago, Chile. His work has been commissioned by many publishing houses, theaters, magazines, and festivals. He uses traditional methods and materials, including engraving, cut paper, wood, ink, watercolor, acrylic, and hand-lettering, usually working with a reduced color palette.

“This attractive offering serves as a primer on using graphics and visuals as forms of public communication. . . . Nichols calls herself an “artivist,” and this fresh guide, which introduces an array of diverse artists and activists and offers insightful tips about art, should inspire aspiring artivists like her.”-Booklist

“Abundant contextual information pairs beautifully with encouragement to engage—safely—with protest in a variety of ways suited to civic-minded young artists. Nichols is sure to inspire an entire generation of new ‘artivists.'”-Kirkus Reviews (starred review)

“The art in this book is amazing. . . the bold colors and fonts used in the graphic design illustrate technique and provide examples for readers.”-School Library Connection (starred review)

A Note from DE NICHOLS

When I was a kid growing up in Mississippi and Tennessee, I learned pretty early about social injustices that exist in the world. I remember defending myself against bullies who did not like me because of my dark skin. I recall watching my favorite TV shows and learning about South African apartheid, police brutality, the global AIDS crisis, and historic movements for civil rights through episodes that dared to highlight these causes.

As I recognized the power of the media in expanding my knowledge, I began to create art in my teens that reflected the issues happening around me— 9/11, Hurricane Katrina, the Jena Six trials. And by the time I found myself as an arts organizer on the ground in the 2014 Ferguson Uprising, I felt equipped with the experience to deploy art as a way of bringing people together to raise our collective voices.

Throughout this book, you will learn the art of protest through the many artworks, experiences, and campaigns that have been created across the world to protest social injustices and advocate for the rights and liberties of diverse communities. You will learn a bit of my story as well as the stories of others— leaders, artists, youth, and everyday people—who have used art as a tool for organizing community and catalyzing change. However, I hope you will also learn the art of protesting. Tips and strategies are shared throughout this book to help you exercise creative ways to mindfully organize, create, and protest with others. Suggested art activities range from writing simple protest signs to designing banners, building sculptures, organizing flash mobs, and making cause-specific artworks.

With this, you might be more compelled to raise your voice about the issues, causes, and global concerns that matter to you. Our society constantly experiences waves of social movements, campaigns for justice, and fights against climate issues and disease on a global scale. And no matter where you live, or what language you speak, or what cause you choose, it is my hope that this book will encourage and equip you to use art as a language and instrument that can help you champion your chosen cause.