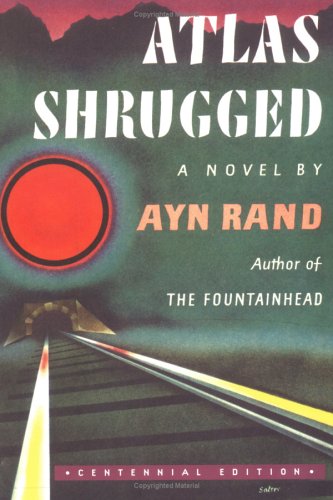 Atlas Shrugged (1957) is a mystery story, Ayn Rand once commented, “not about the murder of man’s body, but about the murder—and rebirth—of man’s spirit.” It is the story of a man—the novel’s hero—who says that he will stop the motor of the world, and does. The deterioration of the U.S. accelerates as the story progresses. Factories, farms, shops shut down or go bankrupt in ever larger numbers. Riots break out as food supplies become scarce. Is he, then, a destroyer or the greatest of liberators? Why does he have to fight his battle, not against his enemies but against those who need him most,

Atlas Shrugged (1957) is a mystery story, Ayn Rand once commented, “not about the murder of man’s body, but about the murder—and rebirth—of man’s spirit.” It is the story of a man—the novel’s hero—who says that he will stop the motor of the world, and does. The deterioration of the U.S. accelerates as the story progresses. Factories, farms, shops shut down or go bankrupt in ever larger numbers. Riots break out as food supplies become scarce. Is he, then, a destroyer or the greatest of liberators? Why does he have to fight his battle, not against his enemies but against those who need him most, including the woman, Dagny Taggart, a top railroad executive, whom he passionately loves? What is the world’s motor—and the motive power of every man? Peopled by larger-than-life heroes and villains, and charged with awesome questions of good and evil, Atlas Shrugged is a novel of tremendous scope. It presents an astounding panorama of human life—from the productive genius who becomes a worthless playboy (Francisco d’Anconia)—to the great steel industrialist who does not know that he is working for his own destruction (Hank Rearden)—to the philosopher who becomes a pirate (Ragnar Danneskjold)—to the composer who gives up his career on the night of his triumph (Richard Halley). Dramatizing Ayn Rand’s complete philosophy, Atlas Shrugged is an intellectual revolution told in the form of an action thriller of violent events—and with a ruthlessly brilliant plot and irresistible suspense.

We do not want to spoil the plot by giving away its secret or its deeper meaning, so as a hint only we will quote here one brief exchange from the novel:

“If you saw Atlas, the giant who holds the world on his shoulders, if you saw that he stood, blood running down his chest, his knees buckling, his arms trembling but still trying to hold the world aloft with the last of his strength, and the greater the effort the heavier the world bore down upon his shoulders—what would you tell him to do?”

“I…don’t know. What…could he do? What would you tell him?”

Ayn Rand was born in St. Petersburg, Russia, on February 2, 1905. At the age of nine, she decided to make fiction-writing her career. In late 1925 she obtained permission to leave the USSR for a visit to relatives in the United States. Arriving in New York in February 1926, she first spent six months with her relatives in Chicago before moving to Los Angeles.

On her second day in Hollywood, the famous director Cecil B. De Mille noticed her standing at the gate of his studio, offered her a ride to the set of his silent movie The King of Kings, and gave her a job, first as an extra and later as a script reader. During the next week at the studio, she met an actor, Frank O’Connor, whom she married in 1929; they were happily married until his death fifty years later.

After struggling for several years at various menial jobs, including one in the wardrobe department at RKO, she sold her first screenplay, “Red Pawn,” to Universal Studios in 1932 and then saw her first play, Night of January 16th, produced in Hollywood and (in 1935) on Broadway. In 1936, her first novel, We the Living, was published.

She began writing The Fountainhead in 1935. In the character of Howard Roark, she presented for the first time the Ayn Rand hero, whose depiction was the chief goal of her writing: the ideal man, man as “he could be and ought to be.” The Fountainhead was rejected by a dozen publishers but finally accepted by Bobbs-Merrill; it came out in 1943. The novel made publishing history by becoming a best-seller within two years purely through word of mouth; it gained lasting recognition for Ayn Rand as a champion of individualism.

Atlas Shrugged (1957) was her greatest achievement and last work of fiction. In this novel she dramatizes her unique philosophy of Objectivism in an intellectual mystery story that integrates ethics, metaphysics, epistemology, politics, economics, and sex. Although she considered herself primarily a fiction writer, she realized early that in order to create heroic characters, she had to identify the philosophic principles which make such people possible. She proceeded to develop a “philosophy for living on earth.” Objectivism has now gained a worldwide audience and is an ever growing presence in American culture. Her novels continue to sell in enormous numbers every year, proving themselves enduring classics of literature.

"A writer of great power. She has a subtle and ingenious mind and the capacity of writing brilliantly, beautifully, bitterly."—The New York Times

What and where is the “utopia of greed”?

Why does Dagny Taggart, a woman of ruthless logic who passionately loves life, chase a mysterious stranger’s plane in her own plane when she knows it will lead to her virtually certain death?

Why do Dagny Taggart and Lillian Rearden—both highly affluent women—fight over a cheap metallic bracelet? Who gets to keep the bracelet, and at what cost? What is Lillian’s real motive in trapping her husband Hank in infidelity?

Why does Francisco d’Anconia, heir to the greatest fortune in the world and a productive genius with boundless ambition, seek ever more outrageous ways to destroy his own business empire? Why does he turn into a playboy who forsakes the woman he loves and instead seduces prominent women who are of no interest to him?

When an entire country tells them that their railroad bridge, constructed from a new ultralight metal, won’t stand under the onrush of a speeding train, why are Dagny Taggart and Hank Rearden so confident that it will? Were you convinced by the arguments offered against them by their opponents? Whom did you side with? Why?

According to Atlas Shrugged, selfishness is both moral and practical. What does Ayn Rand mean by “selfishness”? Compare the actions and character of James Taggart, Hank Rearden, Orren Boyle, and Francisco d’Anconia: Who is selfish and who is not? Can you present arguments for or against Ayn Rand’s view of selfishness? Contrast Ayn Rand’s approach with that of the ethics of Christianity.

What basic motive unites people who brag about their sexual promiscuity and people who demand economic handouts from the government?

Explain the meaning and wider significance of the following quote from Atlas Shrugged: “The words ‘to make money’ hold the essence of human morality.” Explain what ideas underlie the maxim that “money is the root of all good.”

Capitalism is often defended by appeal to the “public good”; that is, solely because its economic efficiency benefits society. Contrast this with Ayn Rand’s defense of capitalism, as dramatized in Atlas Shrugged.