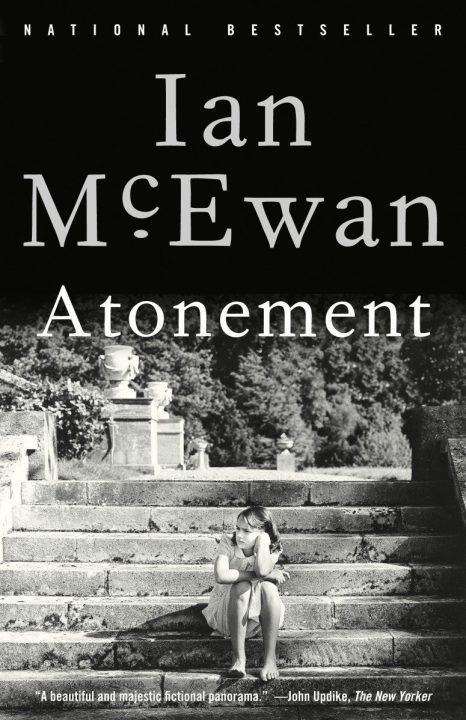 The novel opens on a sweltering summer day in 1935 at the Tallis family’s mansion in the Surrey countryside. Thirteen-year-old Briony has written a play in honor of the visit of her adored older brother Leon; other guests include her three young cousins—refugees from their parent’s marital breakup—Leon’s friend Paul Marshall, the manufacturer of a chocolate bar called “Amo” that soldiers will be able to carry into war, and Robbie Turner, the son of the family charlady whose brilliantly successful college career has been funded by Mr. Tallis. Jack Tallis is absent from the gathering; he spends most of his time in London at the War Ministry and with his mistress.

The novel opens on a sweltering summer day in 1935 at the Tallis family’s mansion in the Surrey countryside. Thirteen-year-old Briony has written a play in honor of the visit of her adored older brother Leon; other guests include her three young cousins—refugees from their parent’s marital breakup—Leon’s friend Paul Marshall, the manufacturer of a chocolate bar called “Amo” that soldiers will be able to carry into war, and Robbie Turner, the son of the family charlady whose brilliantly successful college career has been funded by Mr. Tallis. Jack Tallis is absent from the gathering; he spends most of his time in London at the War Ministry and with his mistress. His wife Emily is a semi-invalid, nursing chronic migraine headaches. Their elder daughter Cecilia is also present; she has just graduated from Cambridge and is at home for the summer, restless and yearning for her life to really begin. Rehearsals for Briony’s play aren’t going well; her cousin Lola has stolen the starring role, the twin boys can’t speak the lines properly, and Briony suddenly realizes that her destiny is to be a novelist, not a dramatist.

In the midst of the long hot afternoon, Briony happens to be watching from a window when Cecilia strips off her clothes and plunges into the fountain on the lawn as Robbie looks on. Later that evening, Briony thinks she sees Robbie attacking Cecilia in the library, she reads a note meant for Cecilia, her cousin Lola is sexually assaulted, and she makes an accusation that she will repent for the rest of her life.

The next two parts of Atonement shift to the spring of 1940 as Hitler’s forces are sweeping across the Low Countries and into France. Robbie Turner, wounded, joins the disastrous British retreat to Dunkirk. Instead of going up to Cambridge to begin her studies, Briony has become a nurse in one of London’s military hospitals. The fourth and final section takes place in 1999, as Briony celebrates her seventy-seventh birthday with the completion of a book about the events of 1935 and 1940, a novel called Atonement.

In its broad historical framework, Atonement is a departure from McEwan’s earlier work, and he loads the story with an emotional intensity and a gripping plot reminiscent of the best nineteenth-century fiction. Brilliant and utterly enthralling in its depiction of childhood, love and war, country and class, the novel is a profoundly moving exploration of shame and forgiveness and the difficulty of absolution.

Ian McEwan is the bestselling author of more than twelve books, most recently the novels On Chesil Beach and Saturday. Others novels include Atonement and The Comfort of Strangers, both shortlisted for the Booker Prize, Amsterdam, winner of the Booker Prize, and The Child in Time, winner of the Whitbread Award, as well as the short story collections First Love, Last Rites, winner of the Somerset Maugham Award, and In Between the Sheets. He has also written screenplays, plays, television scripts, a children’s book, and the libretto for an oratorio. He lives in London.

“Brilliant. . . . McEwan could be the most psychologically astute writer working today, our era’s Jane Austen.” –Esquire

1. What sort of social and cultural setting does the Tallis house create for the novel? What is the mood of the house, as described in chapter 12? What emotions and impulses are being acted upon or repressed by its inhabitants? How does the careful attention to detail affect the pace of Part One, and what is the effect of the acceleration of plot events as it nears its end?

2. A passion for order, a lively imagination, and a desire for attention seem to be Briony’s strongest traits. In what ways is she still a child? Is her narcissism—her inability to see things from any point of view but her own—unusual in a thirteen-year-old? Why does the scene she witnesses at the fountain change her whole perspective on writing? What is the significance of the passage in which she realizes she needs to work from the idea that “other people are as real as you. And only in a story could you enter these different minds and show how they had an equal value” [p. 38]? Do her actions bear this out?

3. What kind of a person is Emily Tallis? Why does McEwan decide not to have Jack Tallis make an appearance in the story? Who, if anyone, is the moral authority in this family? What is the parents’ relationship to Robbie Turner, and why does Emily pursue his conviction with such single-mindedness?

4. What happens between Robbie and Cecilia at the fountain? What symbolic role does Uncle Clem’s precious vase play in the novel? Is it significant that the vase is glued together by Cecilia, and broken finally during the war by Betty as she readies the house to accept evacuees?

5. Having read Robbie’s note to Cecilia, Briony thinks about its implications for her new idea of herself as a writer: “No more princesses! . . . With the letter, something elemental, brutal, perhaps even criminal had been introduced, some principle of darkness, and even in her excitement over the possibilities, she did not doubt that her sister was in some way threatened and would need her help” [pp. 106–7]. Why is Robbie’s uncensored letter so offensive within the social context in which it is read? Why is Cecilia not offended by it?

6. The scene in the library is one of the most provocative and moving descriptions of sex in recent fiction. How does the fact that it is narrated from Robbie’s point of view affect how the reader feels about what happens to him shortly afterwards? Is it understandable that Briony, looking on, perceives this act of love as an act of violence?

7. Why does Briony stick to her story with such unwavering commitment? Does she act entirely in error in a situation she is not old enough to understand, or does she act, in part, on an impulse of malice, revenge, or self-importance? At what point does she develop the empathy to realize what she has done to Cecilia and Robbie?

8. How does Leon, with his life of “agreeable nullity” [p. 103], compare with Robbie in terms of honor, intelligence, and ambition? What are the qualities that make Robbie such an effective romantic hero? What are the ironies inherent in the comparative situations of the three young men present—Leon, Paul Marshall, and Robbie?

9. Lola has a critical role in the story’s plot. What are her motivations? Why does she tell Briony that her brothers caused the marks on her wrists and arms [see pp. 109–13]? Why does she allow Briony to take over her story when she is attacked later in the evening [see pp. 153–60]? Why does Briony decide not to confront Lola and Paul Marshall at their wedding five years later?

The novel’s epigraph is taken from Jane Austen’s Northanger Abbey, in which a naïve young woman, caught up in fantasies from the Gothic fiction she loves to read, imagines that her host in an English country house is a villain. In Austen’s novel Catherine Norland’s mistakes are comical and have no serious outcome, while in Atonement, Briony’s fantasies have tragic effects upon those around her. What is McEwan implying about the power of the imagination, and its potential for harm when unleashed into the social world? Is he suggesting, by extension, that Hitler’s pathological imagination was a driving force behind World War II?

In McEwan’s earlier novel Black Dogs, one of the main characters comes to a realization about World War II. He thinks about “the recently concluded war not as a historical, geopolitical fact but as a multiplicity, a near-infinity of private sorrows, as a boundless grief minutely subdivided without diminishment among individuals who covered the continent like dust, like spores whose separate identities would remain unknown, and whose totality showed more sadness than anyone could ever begin to comprehend” [Black Dogs, p. 140]. Does McEwan intend his readers to experience the war similarly in Atonement? What aspects of Atonement make it so powerful as a war novel? What details heighten the emotional impact in the scenes of the Dunkirk retreat and Briony’s experience at the military hospital?

When Robbie, Mace, and Nettle reach the beach at Dunkirk, they intervene in an attack on an RAF man who has become a scapegoat for the soldiers’ sense of betrayal and rage. As in many of his previous novels, McEwan is interested in aggressive human impulses that spin out of control. How does this act of group violence relate to the moral problems that war creates for soldiers, and the events Robbie feels guilty about as he falls asleep at Bray Dunes?

About changing the fates of Robbie and Cecilia in her final version of the book, Briony says, “Who would want to believe that the young lovers never met again, never fulfilled their love? Who would want to believe that, except in the service of the bleakest realism?” [p. 350] McEwan’s Atonement has two endings—one in which the fantasy of love is fulfilled, and one in which that fantasy is stripped away. What is the emotional effect of this double ending? Is Briony right in thinking that “it isn’t weakness or evasion, but a final act of kindness, a stand against oblivion and despair, to let my lovers live and to unite them at the end” [p. 351]?

Why does McEwan return to the novel’s opening with the long-delayed performance of The Trials of Arabella, Briony’s youthful contribution to the optimistic genre of Shakespearean comedy? What sort of closure is this in the context of Briony’s career? What is the significance of the fact that Briony is suffering from vascular dementia, which will result in the loss of her memory, and the loss of her identity?

In her letters to Robbie, Cecilia quotes from W. H. Auden’s 1939 poem, “In Memory of W. B. Yeats,” which includes the line, “Poetry makes nothing happen.” In part, the novel explores the question of whether the writing of fiction is not much more than the construction of elaborate entertainments—an indulgence in imaginative play—or whether fiction can bear witness to life and to history, telling its own serious truths. Is Briony’s novel effective, in her own conscience, as an act of atonement? Does the completed novel compel the reader to forgive her?