AUNTIE POLDI AND THE HANDSOME ANTONIO

All the beloved, irascible Auntie Poldi wanted from her Sicilian retirement was time to enjoy the sunshine, a free-flowing supply of wine, and a sultry romance with Chief Inspector Vito Montana. But then her idyll is rudely disrupted by the last person she wants to see on her doorstep: John Owenya, detective inspector with the Tanzanian Ministry of Home Affairs, who is also her estranged lying cheat of a husband.

Not only is John’s sudden reappearance putting a kink in Poldi’s dreamy love affair with Montana, but his presence also comes with a plea for help—and unwanted clashes with the Mafia.

All the beloved, irascible Auntie Poldi wanted from her Sicilian retirement was time to enjoy the sunshine, a free-flowing supply of wine, and a sultry romance with Chief Inspector Vito Montana. But then her idyll is rudely disrupted by the last person she wants to see on her doorstep: John Owenya, detective inspector with the Tanzanian Ministry of Home Affairs, who is also her estranged lying cheat of a husband.

Not only is John’s sudden reappearance putting a kink in Poldi’s dreamy love affair with Montana, but his presence also comes with a plea for help—and unwanted clashes with the Mafia.

Where is John’s half-brother? What is the ten-million-dollar “it” that John’s brother was last seen with, which has both the Sicilian and the Tanzanian mobs in a frenzy? With only a postcard that has a phone number and a name, “Handsome Antonio,” on the back, Auntie Poldi hops begrudgingly (albeit with a great deal of gumption and panache) back into the saddle (in this case, an immaculate red Maserati Cabrio from the eighties with cream leather upholstery). The faster she finds Handsome Antonio, the sooner she can get John Owenya out of her hair and her love life. But the people Poldi discovers along the way may very well knock her immaculate wig askew. 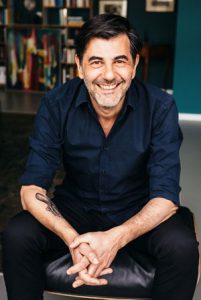 Mario Giordano, the son of Italian immigrants, was born in Munich. Auntie Poldi and the Sicilian Lions, his first novel translated into English, was an IndieNext Pick, a B&N Discover Selection, an Amazon Top Ten Best Book of the Month, and a Costco Staff Pick. He lives in Berlin.

Handsome Antonio was sick of messing around.

He held a fish cleaver to my Auntie Poldi’s throat—it resembled a machete and could easily have bisected a mature tuna— and repeated his question.

Whereupon my Auntie Poldi repeated her reply. “I’ve no idea what you’re talking about, so put that in your pipe and smoke it!”

Which exemplifies the misunderstandings that were clogging the situation like limescale in a tap. The first one, of course, was lack of communication, because Handsome Antonio put his questions in strongly accented Sicilian Italian, whereas Poldi answered him in immaculate Bavarian German. Misunderstanding number two was the fact that Poldi hadn’t a clue where “it” was. Handsome Antonio had hitherto rejected her asseverations to that effect by brandishing his cleaver and yelling, with the result that Poldi had dug in her heels and switched to Bavarian. From her point of view, what aggravated this extremely limited form of communication was misunderstanding number three: the tear-proof duct tape with which Handsome Antonio had secured her to a chair by her wrists and ankles. But the greatest misunderstanding, from my point of view, was .?.?. me. Like the crucial detail in a spot-the-error picture, I was sitting beside my aunt, secured to a chair likewise and almost wetting myself with terror. Expecting to bite the dust at any moment, I visualised my death as an amusing GIF animation looping endlessly on the internet: the cleaver whistling down, my panic-stricken face, the blade lopping off my head (like a knife through butter), the fountain of blood and finally the Great Light and some weird, plinky-plunky music.

I shouldn’t be sitting here, I told myself—no, I certainly shouldn’t be sitting here. Nor should my Auntie Poldi, of course, but in her case this series of misunderstandings could justifiably be regarded as an occupational hazard. I, on the other hand, was merely the chronicler of her escapades and investigations. I was the nerdy author of a half-baked family saga, the untalented nephew devoid of a girlfriend or profession. What was the point of slicing me in half? Needless to say, though, this cut no ice with Handsome Antonio. To him, we were both in the same boat.

The unproductive to and fro between my aunt and Handsome Antonio had bred a certain irascibility on both sides—one that was steadily eroding my hopes of a favourable outcome for the situation; they were in fact nearing zero. However, all of Antonio’s threats seemed to trickle off my Auntie Poldi like beads of condensation off a freshly pulled tankard of beer. This was because, unlike me, she had the knack for switching to a belligerent mode that inoculated her against all kinds of everyday tribulations and fears of failure and the future. Admittedly, she could have looked better. Squinting sideways at her, I saw that her camouflage-pattern trouser suit was torn in several places. Her Nefertiti make-up was smudged after our strenuous crawl through the undergrowth, and a small graze was reddening on her forehead. She was still wearing her wig, but this had also suffered quite a bit on our trek; it was dishevelled and partially disintegrating. Although she didn’t look her sixty years as a rule, your age tends to show when you’re tied to a chair with your wig mussed up and your mascara smudged. That makes it hard to preserve a bella figura. I felt momentarily relieved that Vito Montana, the grumpy, chain-smoking, jealous commissario of police, Poldi’s light of love and—according to her—a sexual force of nature, couldn’t see her in that state, although Montana’s presence would have signalled a welcome turn of events. Why? Because my Auntie Poldi and I were in a really tight spot.

“I’m not telling him a thing, the jerk!”

Handsome Antonio now changed his interrogation tactic: he gave up on Poldi and applied the cleaver to my throat instead.

“Take it easy, my boy! If I tell him, he’ll kill us anyway, you know that, don’t you, so calm down, you hear? I know his sort. He’s a typical leone di cancello, a textbook example of a paper tiger. Big mouth but no balls. Besides, Death hasn’t turned up with his clipboard yet, so relax.”

“I’venoideaI’mjustthechauffeur!” I gasped in bad Italian.

“And a right wimp into the bargain!” said Poldi.

“Easy, sonny. Where there’s a will, there’s always a way.”