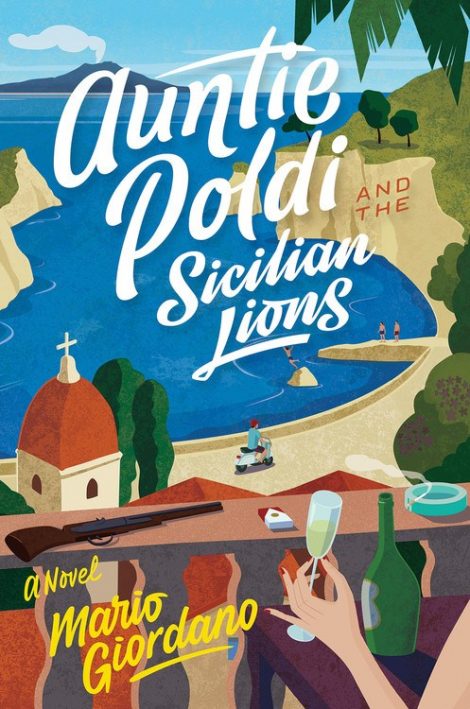 AUNTIE POLDI AND THE SICILIAN LIONS

“Break out the prosecco! There’s a new detective in town—and she’s 60, sexy, wise and utterly adorable. In the first book of what promises to be a smash series, Poldi moves from Munich to Sicily, intent on cheerfully drinking herself to death with a view of the sea. Instead her handyman goes missing, she finds his corpse, and what choice does she have but to solve the crime? To use her favorite saying: Namaste, Poldi!”—People (Book of the Week)

For fans of A Man Called Ove and the novels of Adriana Trigiani,

“Break out the prosecco! There’s a new detective in town—and she’s 60, sexy, wise and utterly adorable. In the first book of what promises to be a smash series, Poldi moves from Munich to Sicily, intent on cheerfully drinking herself to death with a view of the sea. Instead her handyman goes missing, she finds his corpse, and what choice does she have but to solve the crime? To use her favorite saying: Namaste, Poldi!”—People (Book of the Week)

On her sixtieth birthday, Auntie Poldi retires to Sicily, intending to while away the rest of her days with good wine, a view of the sea, and few visitors. But Sicily isn’t quite the tranquil island she thought it would be, and something always seems to get in the way of her relaxation. When her handsome young handyman goes missing—and is discovered murdered—she can’t help but ask questions.

Soon there’s an investigation, a smoldering police inspector, a romantic entanglement, one false lead after another, a rooftop showdown, and finally, of course, Poldi herself, slightly tousled but still perfectly poised.

This “masterly treat” (Times Literary Supplement) will transport you to the rocky shores of Torre Archirafi, to a Sicily full of quirky characters, scorching days, and velvety nights, alongside a protagonist who’s as fiery as the Sicilian sun. 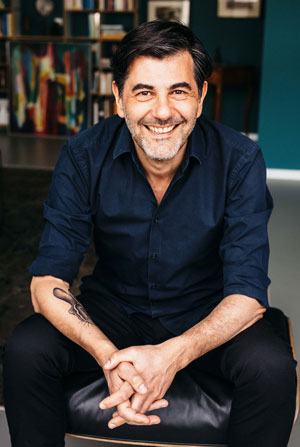 Mario Giordano, the son of Italian immigrants, was born in Munich. He is the author of 1,000 Feelings for Which There Are No Names. He has also written thrillers, books for children, and screenplays. Auntie Poldi and the Sicilian Lions is Giordano’s first novel translated into English.

“There’s a new star in the mystery firmament, and her name is Auntie Poldi. Mario Giordano has created a character who will be the envy of every novelist, mystery and otherwise.”—Alan Bradley, author of The Sweetness at the Bottom of the Pie

“A new detective is among us. Mario Giordano’s Auntie Poldi joins her peers Andrea Camilleri’s Inspector Montalbano and Alexander McCall Smith’s Mma Precious Ramotswe in winning our hearts. She’s a lusty, bold woman who dives into Sicilian life with gusto. I was unable to stop reading and cheering for this renegade. May further adventures ensue!”—Frances Mayes, author of Under the Tuscan Sun

1. Why do Valérie and Poldi hit it off immediately? What do they see in each other that leads to their strong friendship?

2. Poldi is sexy and sassy, with a vibrant romantic life— characteristics we often see in younger protagonists, but not often in older ones. In what other ways does Poldi break with convention? Why do you think vibrant, sexy women of a certain age aren’t featured more frequently in movies and books?

3. The author evokes a very strong sense of place. What were you drawn to most: the descriptions of the food or of the landscape?

4. Poldi is immediately accepted by her neighbors, in spite of her quirks. But while she is an insider in many ways, she is also still an outsider as an expatriate. How does she reconcile this contradiction? Have you ever felt like an insider and an outsider at the same time? How did you reconcile that?

5. Why do you think Poldi chose to photograph policemen? What does it say about her thoughts surrounding authority?

6. Do you have a friend or relative who reminds you of Poldi? What is your relationship with him or her and how does your dynamic relate to the dynamic between Poldi and her nephew?

7. If you could choose any place to retire, as Poldi chose Sicily, where would you go and why?

8. Why does Poldi feel so honor bound to Valentino? Could her motivation to solve his murder also be driven by self-interest?

9. Poldi has a close but complicated relationship with each one of her sisters. At times, they can be a burden to her, but often they become her partners in crime. What are your relationships like with your siblings and how do you navigate and maintain those relationships as you grow older?

On her sixtieth birthday my Auntie Poldi moved to Sicily, intending to drink herself comfortably to death with a sea view. That, at least, was what we were all afraid of, but something always got in the way. Sicily is complicated—you can’t simply die there; something always gets in the way. Then events speeded up, and someone was murdered, and nobody admitted to having seen or known a thing. It goes without saying that my Auntie Poldi, being the pig-headed Bavarian she was, had to take matters in hand herself and sort them out. And that was when problems arose.

My Auntie Poldi: a glamorous figure, always ready to make a dramatic entrance. She had put on a bit of weight in recent years, admittedly, and booze and depression had ploughed a few furrows in her outward appearance, but she was still an attractive woman and mentally tip-top—most of the time, at least. Stylish, anyway. When Madonna’s Music came out, Poldi was the first woman in Westermühlstrasse to wear a white Stetson. One of my earliest childhood memories is of her and Uncle Peppe sitting on my parents’ patio in Neufahrn, Poldi in a bright orange trouser suit, beer in one hand, cigarette in the other, and everyone joining in the laughter she seemed to generate with her entire body, which erupted from her in inexhaustible gusts of mirth—interspersed with the smutty jokes and expletives that made me the star attraction of the school playground when I passed them on the next day.

Isolde and Giuseppe had met at a Munich television studio, where Poldi worked as a costume designer and Peppe was a tailor, an occupation which, for want of any other talent or aspiration, he had inherited from his tyrannical and hypochondriacal father, in other words my grandfather, who had likewise lacked any talents or aspirations—quite unlike his father, my great-grandfather Barnaba, that is, who, without being able to speak a word of German, had emigrated in the 1920s to Munich, where he set up a lucrative wholesale fruit business and became a wealthy man. But I digress.

Poldi and my Uncle Peppe had shared a grand passion, but alas, a few things went badly wrong. Two miscarriages, booze, my uncle’s womanizing, divorce from my uncle, my uncle’s illness, my uncle’s death, the whole issue of the plot of land in Tanzania and sundry other unpleasant twists and turns, setbacks and upheavals of life had stricken my aunt with depression. But she continued to laugh, love and drink a lot, and she didn’t simply take things lying down when they went against the grain. Which they always did.

Poldi had enjoyed being a costume designer, but in recent years she had more and more often lost jobs to younger colleagues. Television work had become scarcer, times harder, and Poldi had gradually fallen out of love with her profession. Stupidly enough, the disastrous venture in Tanzania had robbed her of almost all her savings. But then her parents died in quick succession and left her their little house on the outskirts of Augsburg. And because my Auntie Poldi had always hated the house and everything to do with it, nothing could have been more logical than to sell it and take herself off, together with the rest of her savings and her small pension, and fulfil one of her dearest wishes: to die with a sea view. And family for company.

The family in Sicily naturally suspected that Poldi meant to hasten her demise with a glass or two, given her depressive tendencies, and felt that this must be combated on every level and by all available means. When I say “family” I’m referring principally to my three aunts, Teresa, Caterina and Luisa, and my Uncle Martino, Teresa’s husband. Aunt Teresa, who calls the shots in our family, tried to persuade Poldi to move in with them at Catania, if only for social reasons.

“Don’t be daft, Poldi,” Teresa lamented in her best Munich dialect, “why would you want to live out there, all on your lonesome? Move in near us, then you’d always have someone to chew the fat and play cards with and you can do everything on foot. Theatre, cinemas, supermarket and hospital—everything’s practically on the doorstep. We’ve even got a few good-looking policemen, too.”

Not a chance, though. Poldi’s private agreement with her melancholia stipulated a sea view, and a sea view was what she got, together with a breathtaking panorama from her roof terrace. The sea straight ahead and Etna behind—what more would anyone want? The only snag: with her bad knee, Poldi could hardly make it up the stairs to the roof.

A sleepy, friendly little town on the east coast of Sicily midway between Catania and Taormina, Torre Archirafi is unsuited to any form of tourist exploitation, gentrification or vandalism because of its coastline, which consists of massive, jagged volcanic cliffs. Or so one would think, anyway. This doesn’t, in fact, deter the inhabitants from dumping their rubbish on the beach, making life as difficult for each other as possible, and, in the summer, shoehorning timber platforms and snack bars into the gaps between the cliffs. On weekends families and young people from Catania throng there to sunbathe, eat, read paperbacks, squabble, eat, listen to the radio, eat and flirt, forever bombarded by the thump of indeterminate bass rhythms and dazed by a miasma of coconut oil, frying fat and fatalism. And, in the midst of it all, my Auntie Poldi. She liked the place, I’ve never known why.

Winters in Torre, on the other hand, are dank. A sea the colour of lead snarls at the projecting breakwaters as if intent on swallowing the whole town, and its moist, salty breath adorns every ceiling with black efflorescences of mildew. Air conditioning and feeble central heating systems don’t stand a chance. My Auntie Poldi had to have the whole house whitewashed the very first April after she moved into the Via Baronessa, and again every year thereafter. Winters in Torre aren’t much fun, but at least they’re short.

For shopping one drives to nearby Riposto, or, better still, straight to the HiperSimply supermarket, where everything’s on tap. All Torre itself has to offer is Signor Bussacca’s little tabacchi for basic necessities, the Bar-Gelateria Cocuzza presided over by the sad signora, and a restaurant even the local cats steer clear of. Torre Archirafi does, however, boast a mineral-water spring, and although the bottling plant down by the harbour was closed in the seventies, Acqua di Torre still means something to my aunts. Protruding from the side of the old building is a row of brass taps from which the inhabitants of Torre can still draw their own mineral water free of charge.

“What does it taste like?” I asked politely, the first time Poldi enthused about the public mineral water supply as though speaking of a chocolate fountain.

“Frightful, of course; what do you expect? Still, local patriotism makes folk thirsty.” 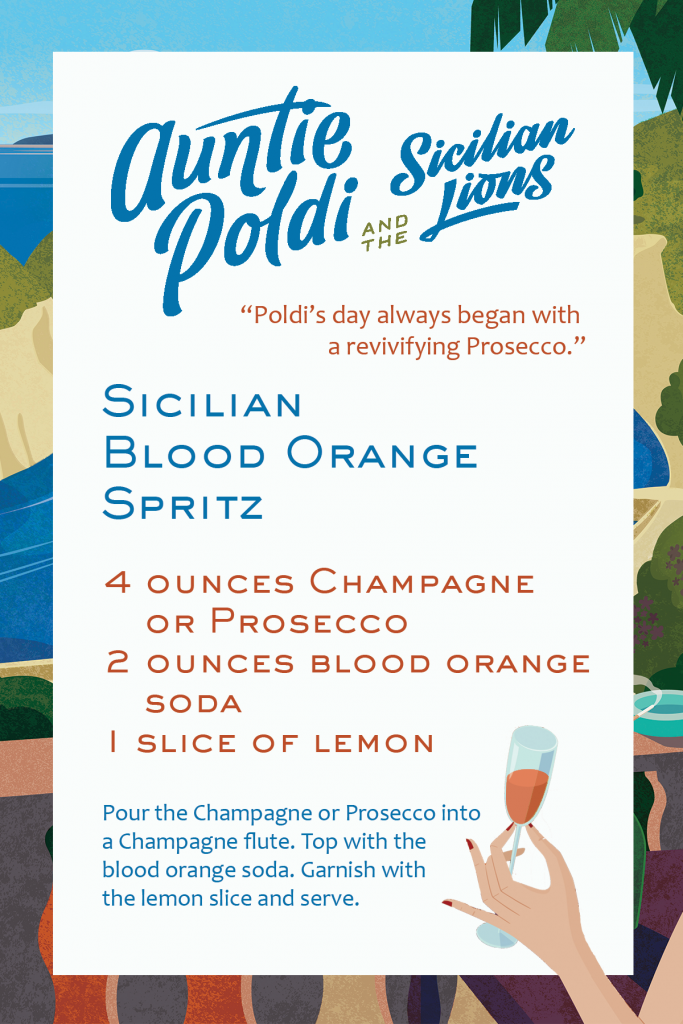 Explore the recipes, drinks, and tunes that celebrate the spirit of Auntie Poldi and the Sicilian Lions.

“At eleven in the morning came the first beer, accompanied by Umberto Tozzi belting out the 1979 pop song ‘Gloria’ at a volume that would have driven even Scylla and Charybdis insane.”