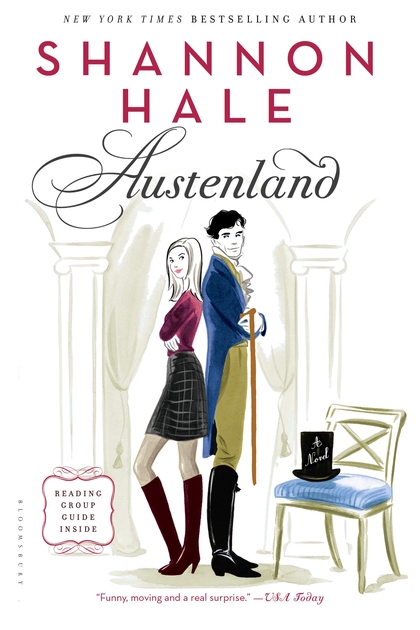 Jane Hayes is a young New Yorker with a real romantic problem: no man she meets can compare to her one true love–Mr. Darcy from Jane Austen’s Pride and Prejudice. But when a wealthy relative bequeaths her a trip to an English resort for Austen fanatics,

Jane Hayes is a young New Yorker with a real romantic problem: no man she meets can compare to her one true love–Mr. Darcy from Jane Austen’s Pride and Prejudice. But when a wealthy relative bequeaths her a trip to an English resort for Austen fanatics, Jane’s fantasies of meeting the perfect Regency-era gentleman suddenly become realer than she ever could have imagined.

Dressed in empire waist gowns and torn between a sexy gardener and an actor playing the brooding Darcy role, Jane finds herself mastering the rules of etiquette and of the resort’s flirtatious games. But when it’s time to bid Austenland goodbye, can Jane really leave her fantasies–and the two men who’ve played into them–behind?

In this addictive, charming, and entirely delightful story, Shannon Hale brings out the Jane Austen obsessive in all of us.

Shannon Hale is the Newbery Honor–winning and New York Times bestselling author of the Princess Academy series, The Books of Bayern, Book of a Thousand Days, Dangerous, and the graphic novels Rapunzel’s Revenge and Calamity Jack, as well as the Ever After High and Princess in Black series, and the upcoming The Unbeatable Squirrel Girl for Marvel. She also wrote three novels for adults, including Austenland, now a major motion picture starring Keri Russell. She and her husband, the author Dean Hale, have four children and live near Salt Lake City, Utah.

“Funny, moving, and a real surprise.” –  USA Today“Gloriously satisfying.” –  Glamour“Adorable! This is the best tribute to obsessed Austen freaks (like me) that I’ve ever read.” –  Stephenie Meyer, New York Times bestselling author of the TWILIGHT series

“An homage to Austen… Austenland offers hope that after years of fruitless searching for a companion, just when you’re ready to give up on love, it will find you on its own.” –  Houston Chronicle

“Allow me to direct you to the best Austen tribute since Karen Joy Fowler’s The Jane Austen Book Club: Shannon Hale’s clever and imaginative Austenland… Hale’s charming first book for adults is chick lit with soul. Though there’s a laugh on nearly every page–Hale, like Austen, is adept at subtly skewering the ridiculous-there’s also the more serious story of a woman learning the difference between fantasy and reality, and discovering that real life can be better than your dreams. Is there a better message for a summer read?” –  Bookpage

2. Austenland, besides chronicling Jane’s stay at Pembrook Park, lists all thirteen “boyfriends” she’s had in her lifetime. How well does the reader get to know Jane’s past? How much has she changed from her first relationship at age twelve to the one that is now just beginning?

4. Looking at the gallery of portraits in Pembrook Park, Jane feels “an itch inside her hand” to paint a portrait, “but she scratched the desire away. She hadn’t picked up a paintbrush since college” (36). How is Jane’s artistic itch intensified during her stay at Pembrook Park? How does she come to the realization that “she wanted to love someone the way she felt when painting—fearless, messy, vivid” (125)? In the end, has she found that type of artistic love?

5. In Pride and Prejudice, Elizabeth’s mother, Mrs. Bennet, is known for her determination to marry off her daughters and for her frequent social blunders. How does Miss Charming, Jane’s fellow visitor to Pembrook Park, resemble Mrs. Bennet? What are some of Charming’s funny faux pas and verbal blunders?

6. Jane realizes, “Wait a minute, why was she always so worried about the Austen gentlemen, anyway? What about the Austen heroine?” (105) Is the heroine given short shrift by many Austen fans today? Why or why not?

7. Jane calls herself and Mr. Nobley “Impertinence and Inflexibility” (133). How do these nicknames originate? How do these traits compare to the pride and prejudice of Darcy and Elizabeth in Austen’s novel?

8. Jane’s great-aunt Carolyn set the whole Pembrook Park adventure into motion. What do you think Carolyn’s intentions were in sending Jane to this Austenland? Do you think Jane fulfilled those expectations?

9. Jane comes to wonder what kind of fantasy world Jane Austen might have created for herself: “Did Austen herself feel this way? Was she hopeful? Jane wondered if the unmarried writer had lived inside Austenland with close to Jane’s own sensibility—amused, horrified, but in very real danger of being swept away” (123). Is it possible to guess at Austen’s attitude toward romance by reading her work? Why or why not?

11. Jane walks away from Nobley and Martin at the airport with the parting words, “Tell Mrs. Wattlesbrook I said tallyho” (186). Why does Jane enjoy her last line so much? What does she mean by “tallyho”?

12. What might Jane Austen think of Austenland, if she were alive today? Could she have possibly anticipated how influential her novels would become, even for twenty-first-century audiences? Could she ever have imagined a fan like Jane Hayes?

13. Shannon Hale reveals on her Web site (www.squeetus.com/stage/austen_journey.html) that the original title for Austenland was Ostensibly Jane, and that it evolved from a short story, to a novella, to a screenplay, to this novel. Can you imagine a shorter version of Austenland? A feature film? What would each be like?

14. Hale lists her “fantasy casting” of a movie version of Austenland at www.squeetus.com/stage/austen_casting.html. What is your own fantasy cast of Austenland? How does it compare to Hale’s?