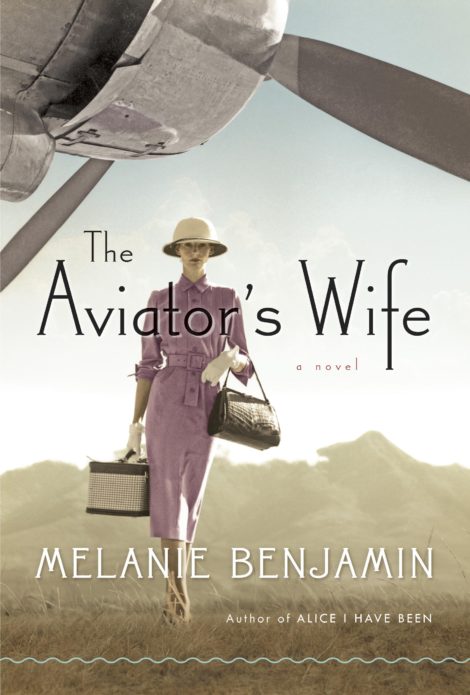 In the spirit of Loving Frank and The Paris Wife, acclaimed novelist Melanie Benjamin pulls back the curtain on the marriage of one of America’s most extraordinary couples: Charles Lindbergh and Anne Morrow Lindbergh.

When Anne Morrow, a shy college senior with hidden literary aspirations, travels to Mexico City to spend Christmas with her family, she meets Colonel Charles Lindbergh, fresh off his celebrated 1927 solo flight across the Atlantic. Enthralled by Charles’s assurance and fame, Anne is certain the aviator has scarcely noticed her. But she is wrong. Charles sees in Anne a kindred spirit,

In the spirit of Loving Frank and The Paris Wife, acclaimed novelist Melanie Benjamin pulls back the curtain on the marriage of one of America’s most extraordinary couples: Charles Lindbergh and Anne Morrow Lindbergh.

When Anne Morrow, a shy college senior with hidden literary aspirations, travels to Mexico City to spend Christmas with her family, she meets Colonel Charles Lindbergh, fresh off his celebrated 1927 solo flight across the Atlantic. Enthralled by Charles’s assurance and fame, Anne is certain the aviator has scarcely noticed her. But she is wrong. Charles sees in Anne a kindred spirit, a fellow adventurer, and her world will be changed forever. The two marry in a headline-making wedding. In the years that follow, Anne becomes the first licensed female glider pilot in the United States. But despite this and other major achievements, she is viewed merely as the aviator’s wife. The fairy-tale life she once longed for will bring heartbreak and hardships, ultimately pushing her to reconcile her need for love and her desire for independence, and to embrace, at last, life’s infinite possibilities for change and happiness.

Melanie Benjamin is the author of the New York Times and USA Today bestselling historical novel, The Aviator’s Wife, a novel about Anne Morrow Lindbergh. Her previous historical novels include the national bestseller Alice I Have Been, about Alice Liddell, the inspiration for Alice in Wonderland, and The Autobiography of Mrs. Tom Thumb, the story of 32-inch-tall Lavinia Warren Stratton, a star during the Gilded Age. Her novels have been translated in over ten languages, featured in national magazines such as Good Housekeeping, People, and Entertainment Weekly, and optioned for film.

“Talented historical novelist Benjamin has a knack for picking intriguing, if somewhat obscure, women in history and making them utterly unforgettable…Intimately depicting [Anne and Charles Lindbergh’s] marriage of duty and partnership in the air, as well as the horrific kidnapping and murder of first child Charles Jr., this is less love story than voyeuristic glimpse at one of the 20th century’s most captivating men through the eyes of the woman who knew him best. In true Benjamin style, it’s Anne who captures us all in this exquisite fictional take on an iconic marriage.”—Publishers Weekly, Starred Review

“Benjamin…delivers another stellar historical novel based on the experiences of an extraordinary woman…Fictional biography at its finest.”—Booklist, Starred Review

“Benjamin’s primary focus is on Anne’s evolution from submissive helpmate into the author of the feminist classic Gift from the Sea…Well-researched and paced, this novel will certainly spark readers’ interest in learning more about this famous couple.”—Library Journal

1. The epigraph for this novel is from Antoine de Saint-Exupéry who, like Anne Morrow Lindbergh, was both a celebrated author and noted aviator. Do you agree with his statement that “One must look with the heart?” What do you think that means? And do you think it means something different to an artist (author) as opposed to a scientist (aviator)?

2. One of the recurring themes is how Anne will choose to remember Charles. How do you think she concludes to remember him by the end? How does it change?

3. Anne’s father says, “And there’s Anne. Reliable Anne. You never change, my daughter.” (pg. 11). How does Anne change over the course of this novel? Or does she?

4. Compare the celebrity of the Lindbergh’s to the celebrity couples of today. What current celebrities do Charles and Anne remind you of most?

5. How does Anne’s nomadic lifestyle as the daughter of an ambassador later influence her concept of “home” with Charles? What do you think defines home?

6. Anne seems to think of herself as an outsider—someone too shy and insular to make a big impression on someone else. Do you think Charles saw through that? Or, do you think that was something about Anne that appealed to him? Is Charles an insular character himself, whether by personality or forced into a “celebrity bubble?” Or, do you think Anne simply misevaluates herself?

7. Have you ever met someone famous? Did they live up to your impression of them?

8. “Had there ever been a hero like him, in all of history?” (pg. 16) Anne starts her description of Charles with hero worship, comparing him to Columbus and Marco Polo. How does her opinion evolve as she comes to know him better? How did your opinion of Charles Lindbergh evolve through Anne’s story?

9. The title of this book is, of course, The Aviator’s Wife. Do you think that’s how Anne views herself upon marrying Charles? Do you think she sees that as a role she’s playing, or as a defining characteristic of who she is? Does it change over the course of the book?

10. Have you ever been up in a biplane? Do you think you would ever go, even with an expert aviator at the controls?

11. Compare the relationships Anne has to the men in her life: her brother, Dwight, her father, and Charles.

12. What rights to privacy do you think a public figure should have? Does it go against being a public figure to get to decide what parts of his or her life stay private?

13. Do you think Charles and Anne were in love? Why or why not? Did that change over time?

14. Do you think you could keep the secrets that Anne keeps from her children? Why or why not?

15. What do you think flying represents to Anne? How does it compare to her with writing? Which do you think is more important to Anne?

16. Do you think Charles Lindbergh was a good husband in any ways? What do you think makes for a good partner?

18. If you could ask Anne a question, what would it be?

19. How does Anne’s relationship with her family change after she marries Charles?

20. How would you react to the scrutiny by the press that Anne and Charles endured? Would you want to be famous if it meant being constantly under the microscope? Would you answer differently if there weren’t social media outlets but the same type of newspapers and newsreels from Anne and Charles’s lifetime?