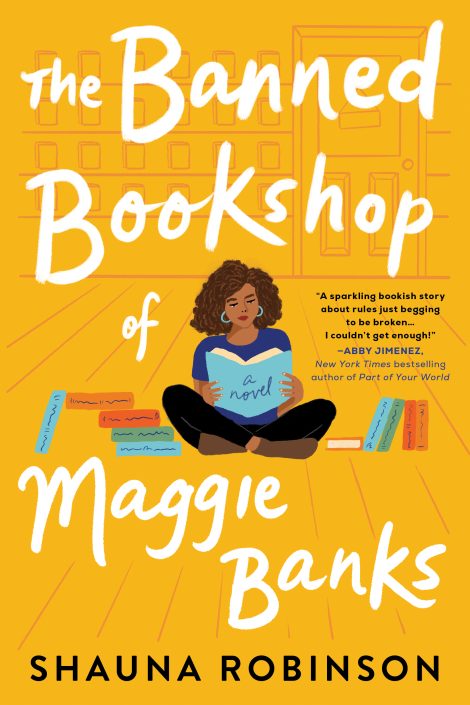 THE BANNED BOOKSHOP OF MAGGIE BANKS

When Maggie Banks arrives in Bell River to run her best friend’s struggling bookstore, she expects to sell bestsellers to her small-town clientele. But running a bookstore in a town with a famously bookish history isn’t easy. Bell River’s literary society insists on keeping the bookstore stuck in the past, and Maggie is banned from selling anything written this century. So, when a series of mishaps suddenly tip the bookstore toward ruin, Maggie will have to get creative to keep the shop afloat.

And in Maggie’s world, book rules are made to be broken.

To help save the store,

When Maggie Banks arrives in Bell River to run her best friend’s struggling bookstore, she expects to sell bestsellers to her small-town clientele. But running a bookstore in a town with a famously bookish history isn’t easy. Bell River’s literary society insists on keeping the bookstore stuck in the past, and Maggie is banned from selling anything written this century. So, when a series of mishaps suddenly tip the bookstore toward ruin, Maggie will have to get creative to keep the shop afloat.

And in Maggie’s world, book rules are made to be broken.

To help save the store, Maggie starts an underground book club, running a series of events celebrating the books readers actually love. But keeping the club quiet, selling forbidden books, and dodging the literary society is nearly impossible. Especially when Maggie unearths a town secret that could upend everything.

Maggie will have to decide what’s more important: the books that formed a small town’s history, or the stories poised to change it all. 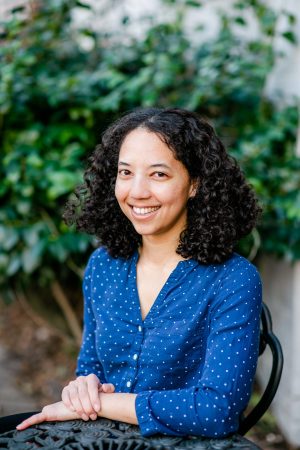 Shauna Robinson’s love of books led her to try a career in publishing before deciding she’d rather write books instead. Originally from San Diego, she now lives in Virginia with her husband and their sleepy greyhound. Shauna is an introvert at heart—she spends most of her time reading, baking, and figuring out the politest way to avoid social interaction.

“A sparkling bookish story about rules just begging to be broken…I couldn’t get enough!” — Abby Jimenez, New York Times bestselling author of Part of Your of Your World and The Friend Zone

“Shauna writes for the girls without dream jobs, the pandemic babies who moved back in with their parents and are just trying to figure it out, and the extroverts who find purpose in bringing people together. This novel is a book lover’s dream, with subtle social commentary to boot.” — Iman Hariri-Kia, author of A Hundred Other Girls

“Shauna Robinson puts forth a wise and honest story of how it feels to be a young woman in search of yourself.” — Taylor Jenkins Reid, New York Times bestselling author of Malibu Rising and Carrie Soto is Back for Must Love Books

“Honest, relatable, and real, Must Love Books is a tender reflection on finding your person while you’re still desperately searching for yourself rolled up in a thoughtful novel about the changing work world.” — KJ Dell’Antonia, New York Times bestselling author of The Chicken Sisters for Must Love Books

2. Outline the similarities and differences between Maggie and her best friend, Rochelle. Why do you think they get along so well?

3. Design your own silly bookish event. What book would you choose, and why?

4. Discuss all the ways Ralph’s strict rules are so detrimental.

5. Maggie finds herself stuck between a rock and a hard place when she discovers Edward Bell’s dark secret. Put yourself in her shoes: Would you reveal it, even though it could mean ruining Bell River?

6. Describe Malcolm. What motivates him?

7. Maggie and many people in her book club admit to not loving the classics, but they do love genre fiction. What’s your favorite book? Do you consider it a classic?

8. Explain Vernon’s involvement with the town’s legacy in the past and moving forward.

9. Think about the pressure Maggie feels to follow the typical life plan (graduate from college, land a dream job, get married, etc.). Have you ever felt pressure to fulfill others’ expectations?

10. What do you think is the most important lesson Maggie learns by the end of the book?

What inspired this story?

I love books set in bookstores. I also love chaos. I wanted to read a book about an unlikely bookstore employee—someone who doesn’t enjoy reading and who gets into mischief when she starts skirting the absurd rules that make her job difficult.

Maggie simply doesn’t feel passionate about any career path. Why did you decide to make this such an integral part of her character?

I grew up believing that whatever job I got would say something about who I was—my identity, my abilities, my interests. But the more time I spent in the working world, the more I realized that’s often not the case. We might take a job because we have limited opportunities or because a job meets our needs even if it doesn’t match our passions. I love that Maggie pushes back against the idea that we need to define ourselves by our jobs. I hope she makes anyone who feels lost or stuck realize that they are so much more than that thing they do to make rent and pay bills. It’s okay to find fulfillment elsewhere.

Edward Bell is, frankly, a terrible guy. How did you dream him up?

I do love having at least one terrible person in my books. In the first draft, Edward Bell was actually Bell River’s terrible, eccentric founder, but my editors smartly realized it would be more interesting if he were an author—especially because it would tie in so nicely with the bookstore setting. And they were right! I had fun diving into Edward Bell’s character—mostly by thinking back on revered classic authors and imagining what dark secrets they might be hiding.

Maggie and Malcolm get drinks at Tome, an imaginary bookthemed bar… Do you have any real-life recommendations for bookish destinations?

Novela is a bar in San Francisco where you can enjoy cocktails named after book characters. I attended a few happy hours there, where I’d stare at the glowing wall of colorful books and fantasize about touching one. (I did not, because I am not Maggie.)

Bell River, while a fictional town, is such an important part of the story. Why did you choose it as a setting?

A fictional author must hail from a fictional town, at least if I wanted to make my life a little bit easier! I loved creating the town of Bell River. I started writing this novel in the summer of 2020, which was a strange and uncertain time. It was pure escapism to dream up a small town whose biggest problem was having a bookstore stuck in the past.

This is your second book, the first being Must Love Books. Was your approach to writing this one different than your first?

Very different. For one, this was book two in a two-book deal, so there was none of that this won’t amount to anything mindset that dominated the writing of my first novel. This book had to amount to something. A publisher had already bought it! And I was desperate not to disappoint! While Must Love Books was written in brief periods over the course of a few years, I wrote the first draft of this book in about two months, nearly a year before it was due. As with my first novel, there were moments when I felt like I had no idea what I was doing. I’ve been told that feeling doesn’t go away, no matter how many books you write. Which is unfortunate.

This novel is almost an ode to the kinds of books people love but that don’t get as much respect as classics (i.e. romance, horror, mysteries, science fiction, etc.). Why did you choose to explore this as a theme?

It reflects my own reading journey, in a way. I grew up reading a ton of middle grade and young adult novels. As I got older, I moved on to reading exclusively literary classics, because I was a Serious English Major and that’s what Serious English Majors do. I’d been disappointed to reach adulthood and come to the (mistaken) realization that being an adult must mean I couldn’t read YA anymore. It was thrilling to discover I could actually read whatever I wanted. I still love classics—they make me feel connected to all the booklovers throughout time who have read and loved these books that have been around for centuries. But it was freeing to expand my reading horizons and realize no book’s genre or age category should be relegated to “guilty pleasure” if it’s something that brings you joy.

Speaking of books we love—which books are on your To Be Read list right now? How much time do we have?

I’ve been eagerly awaiting The Moment We Met by Camille Baker for its mysterious dating app shenanigans, and Meredith Schorr’s As Seen on TV looks like a fun twist on the small-town trope. I’ve also been excited to read On Rotation by Shirlene Obuobi, The Fortunes of Jaded Women by Carolyn Huynh, and Long Past Summer by Noué Kirwan.

Community is at the heart of this story. When did you realize this was so important to Maggie’s journey?

Truth be told, I didn’t! During the revision process, when I was still figuring out Maggie as a character, my editors were the ones who drew that connection for me. Up until that point, I knew Maggie was an extrovert with no career aspirations who loved bringing people together at her bookstore events—and that was about it. Then my editors pointed out that Maggie’s love of the bookstore community could be just one thread in a greater desire to find and form community wherever she goes. After that, the rest of Maggie fit seamlessly into place. Characters don’t typically come to me fully formed, and I’m grateful my editors could help me fill in the blanks of who Maggie is.

What’s something you hope readers learn from The Banned Bookshop of Maggie Banks?

We spend a lot of time and energy trying to follow rules that don’t exist. For some of us, these imaginary rules might dictate small things, like the types of books we think we’re supposed to read. For others, these rules might govern bigger things, like milestones we think we need to reach by a certain age. But these rules aren’t real. Taking a closer look at the rules we’ve set for ourselves—and deciding what to keep and what to discard—might, I hope, help each one of us forge a better, brighter path ahead.