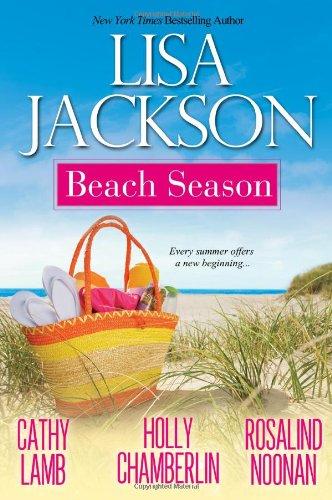 The Brass Ring by Lisa Jackson

It’s a beautiful June day, perfect for a wedding–until Shawna learns that her fiancé, Parker, has been involved in a car crash. Though his injuries heal, his memories of her are gone. Yet Shawna won’t stop reaching to reclaim the love they once shared. . .

The Brass Ring by Lisa Jackson

It’s a beautiful June day, perfect for a wedding–until Shawna learns that her fiancé, Parker, has been involved in a car crash. Though his injuries heal, his memories of her are gone. Yet Shawna won’t stop reaching to reclaim the love they once shared. . .

June MacKenzie is done–with her high-pressure legal career, her difficult soon-to-be-ex, and the stress of city living. In her studio on the Oregon coast, she creates beautiful lace wedding dresses, with no intention of ever wearing one again herself. Then songwriter Reece rents the house next door, and sets out to change her mind. . .

Thea Foss is putting a bad marriage behind her in the pretty vacation town of Ogunquit, Maine. What’s past is past. . ..Until her first love wanders into the local diner, reminding Thea of the person she once was, and the life it’s not too late to claim. . .

Jane Doyle needs to get out of New York–the farther the better. She’s headed toward Florida, but thanks to a storm along North Carolina’s Outer Banks, she finds herself stranded in a beautiful, remote town that soon feels a lot like home. And thanks to the local sheriff, she finds herself staying longer than she planned–and feeling less lost at sea than ever. . .

Lisa Jackson has been writing romantic fiction for fifteen years. Over sixty of her books have been published and reprinted in more than a dozen foreign languages. A single mother, she is a native of Oregon, where she still resides with her two teenage sons. Lisa is often asked what is the key to her success, and her unfailing answer is a keen imagination, incredible friends, loving family, and always, loads of laughter. As Oscar Wilde is purported to have said, “Life is too important to be taken seriously.”

Rosalind Noonan grew up in suburban Maryland and enjoyed being part of a large family. “With my four siblings, Saturday mornings were a blast,” she says. “There was festival seating on the living room floor as we tuned into cartoons and passed the Sugar Pops.”

“In this satisfying and often heartwrenching anthology that is not your typical cheery beach read, four authors explore the topic of lost love and the magical qualities of unexpected second chances. In Lamb’s “June’s Lace,” a lawyer turned wedding dress designer undergoing a drawn-out divorce meets a sweet songwriter who helps her begin to dream of a happier future. In Chamberlin’s “Second Chance Sweethearts,” long-separated high school flames find each other again in a sleepy Maine beach town after both have divorced others. In Noonan’s “Carolina Summer,” a murder witness encounters a handsome sheriff in the North Carolina beach town where she takes refuge. In Jackson’s “The Brass Ring,” a headstrong doctor is floored when her tennis player fiancé loses his memory in a serious car accident the night before the wedding. Each of the authors proves that with a resilient spirit, love never truly dies—and, in fact, can be sweeter the second time around.”—Publishers Weekly