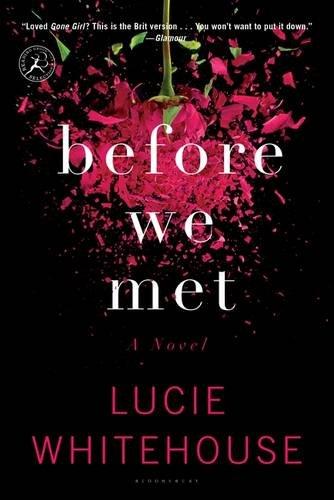 If you loved Gone Girl and The Husband’s Secret, Before We Met should be your next read.

Hannah has always been wary of commitment, but when she meets Mark, a fellow Brit, one hot New York summer, her ideas change. Within months, they are married, and she has moved back to London to be with him, leaving her life in New York behind. But when Mark fails to return from a business trip, her certainty about their marriage starts to crack. Why don’t his colleagues know about the trip? Who is the woman who keeps calling his office?

If you loved Gone Girl and The Husband’s Secret, Before We Met should be your next read.

Hannah has always been wary of commitment, but when she meets Mark, a fellow Brit, one hot New York summer, her ideas change. Within months, they are married, and she has moved back to London to be with him, leaving her life in New York behind. But when Mark fails to return from a business trip, her certainty about their marriage starts to crack. Why don’t his colleagues know about the trip? Who is the woman who keeps calling his office? And why has Hannah’s bank account been emptied? Hannah’s questions will uncover secrets that throw into doubt everything she has believed about her husband, secrets that lead her to a place of violence and fear.

Can you ever really know what happened before you met?

Lucie Whitehouse was born in Warwickshire, England, in 1975, studied classics at the University of Oxford, and now lives in Brooklyn, New York, with her husband and daughter. She is the author of The House at Midnight and The Bed I Made.

“Whitehouse’s writing keeps you glued to the page . . . A gripping tale about ties that bind.” —Boston Globe

“Nail-biting [and] spine-tingling.” —The Observer, Thriller of the Month

“A crackerjack premise that will hook readers from the first page . . . A gripping cat-and-mouse read.” —Booklist

At the beginning of the novel, Hannah feels useless for having left her self-made, high-powered life in New York and she is embarrassed by her continued unemployment and growing domesticity. Hannah’s feelings of displacement and insecurity fuel her initial search for Mark’s mistress, but as the lies unfold, her embarrassment quickly blooms into crippling regret. Discuss Hannah’s choice to leave her old life behind. Do you feel that it was an act of weakness or strength?

Hannah is distraught and furious that Mark, the man she married, could keep such egregious secrets from her. And yet Mark insists that he only kept them “to save [their] marriage” (271). What is fundamentally different about the way they view marital bonds? Discuss the nature of Mark and Hannah’s marriage. How does their dynamic change as Hannah begins to learn more about Mark’s past?

Tom’s uncompromising honesty is refreshing, but often hurtful. Explore the function of Tom’s blunt, no-nonsense approach to life. In what ways does it both contrast and complement Hannah’s flighty yet headstrong nature? Why is Hannah so afraid of Tom’s disapproval? Can you think of people in your own life who have acted as a moral guide?

Hannah kicks herself for never pushing Mark about his past or taking it upon herself to learn anything about him. Do you think Hannah, swept up in her new found love, was negligent or naïve? Or do you think she was justified in taking Mark at his word? If you were in the same situation, what would you have done?

Lying can often be easier than telling the truth. Throughout the book there are multiple examples of seemingly harmless lies and omissions. Hannah lies to get out of a first date with Mark; she refuses to acknowledge her inability to commit romantically; even her gift for advertising is another means of peddling the best version of the truth. Is lying morally wrong in all cases? Can lies ever be innocent? Or are they inherently harmful?

When Hannah is still unsure if Mark is having an affair, she feels guilty for rifling through his belongings and accosting his friends and coworkers. Even when asking repeatedly about Nick, she is careful to be respectful of Mark’s feelings. Hannah is wary of overstepping Mark’s boundaries but also feels hurt that he would withhold information from her. Where is the line between being entitled to the truth and invading someone’s privacy?

When Hannah goes to see Nick and Mark’s parents, she sees a side of Mark’s life he had decided to leave behind forever. Discuss the disparities between Mark’s memories of his childhood and the version Hannah sees in person. How is this trip enlightening for Hannah? What does it clarify about Mark’s character?

Mark’s father insists that they were “an embarrassment to him – the boring, ordinary, petite bourgeois people…he had to leave behind in order to create whoever he is these days” (229). Even before he met Hannah over a year before, and after claiming to confess the whole truth to her, Mark insisted that his parents were deceased. Hannah yearns for the truth, no matter how gruesome, while Mark attempts to erase his past. Is it possible to live without a past? Can you ever really leave your past behind you?

Because of Mark’s expert manipulation of the truth, Hannah is in a constant state of unearthing devastating secrets. What were some of the most suspenseful or surprising moments for you? What techniques does Whitehouse use to build suspense?

As the book unfolds, Mark’s uncovered past makes him an increasingly complicated character. By the end of the novel, Mark is a completely different character from when the book began. Can you think of examples from your own life where knowing someone’s past changed the way you saw them in the present?

When Nick is released from prison, Hannah is prepared to be faced with a callous, cold-blooded killer. But when they meet, Nick turns out to be drastically different from how she had imagined him. Discuss this contrast. How would you describe Nick’s personality? Do you feel sympathetic for him? If so, why?

Once Hannah knows the full truth, Mark begs her to stay with him. Holding her down, he frantically claims that she is the only person he ever truly loved, because “It’s wonderful – you’re with me because you want me. Me.” (271) Mark believes that the caring, successful persona he’s created is his true self. But when you separate the truth from the lies, in your opinion, which pieces of Mark’s character are authentic? Are any of them?

Hannah had always been ashamed of her mother’s destructive marital insecurity and mistrust. However, revisiting the site of her engagement to Mark, Tom tells her that their mother had been right all along – her husband was in fact having an affair – and she had kept the truth from her children in an effort to salvage their relationship with their father. Hannah is stunned; her life was destroyed by Mark’s lies, but is lying ever the answer? Can there ever be a good reason to hide the truth?

Theoretically, had Nick stayed in prison, Hannah could have remained ignorant of the truth forever. Discuss this possibility. Do you believe that it’s possible to keep a secret alive forever? Or is the truth more powerful than a lie?

Consider all of the deceit, death, and horror that Hannah has been through by the end of novel. Thinking back on it all, she realizes that “She’d got everything wrong – everything,” and yet, she feels relieved. Starting over, this time “she could only do better” (276). Putting yourself in Hannah’s place, what lessons do you think you would’ve learned? How would you approach your life differently the second time around?