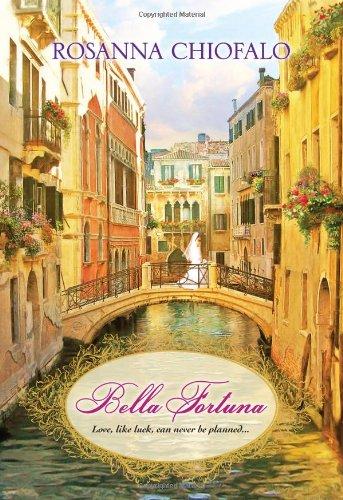 In this warm, enchanting debut novel, Rosanna Chiofalo evokes the extraordinary beauty of Venice, the charm of a close-knit New York neighborhood, and the joys of friendship, family, and surprising second chances…

Valentina DeLuca has made hundreds of brides’ dreams come true. At Sposa Rosa, the Astoria, New York, boutique where she, her sisters, and their mother design and sew couture knock-off gowns, she can find the perfect style for even the most demanding customer. Now, it’s her turn. Valentina has loved Michael Carello ever since he rescued her from a cranky shopkeeper when she was ten years old.

In this warm, enchanting debut novel, Rosanna Chiofalo evokes the extraordinary beauty of Venice, the charm of a close-knit New York neighborhood, and the joys of friendship, family, and surprising second chances…

Valentina DeLuca has made hundreds of brides’ dreams come true. At Sposa Rosa, the Astoria, New York, boutique where she, her sisters, and their mother design and sew couture knock-off gowns, she can find the perfect style for even the most demanding customer. Now, it’s her turn. Valentina has loved Michael Carello ever since he rescued her from a cranky shopkeeper when she was ten years old. He’s handsome, chivalrous, and loyal. And in a few weeks, she’s going to marry him—in Venice.

But just when she thinks everything is falling into place, Valentina is forced to re-examine her life to see what truly makes her happy. And as she soon learns, in a place as magical as Venice, what seems like misfortune can turn out to be anything but, although who knows what may be waiting around the next corner? The chance to enjoy a moonlit gondola ride, to sip Prosecco in St. Mark’s Square, to eat mouthwatering gelato, to put aside “sensible” for once and see where the warm Italian breezes guide her as she visits all the sights she’s dreamed of: The Doge’s Palace, Il Rialto, the little islands of Murano and Burano. And maybe, along the way, to discover that bella fortuna—good luck—isn’t what you’re given, but what you make.

Rosanna Chiofalo is a first-generation Italian American whose parents emigrated from Sicily to New York in the early 1960s. After graduating with a BA in English from Stony Brook University, Rosanna knew she wanted to be around books and have a career in writing. For twenty years, she’s worked as a Copywriter and Copy Director for several New York City publishing houses. Currently, she is hard at work writing her second novel.

"Like a gondolier navigating the canals of Venice, Rosanna Chiofalo takes you on a magical ride filled with family and friends, love and loss, heartbreak and happiness. Bella Fortuna is a warm glimpse into Italian-American life."—Holly Chamberlin, author of Last Summer

“Reading Rosanna Chiofalo’s depiction of a modern Italian-American family is like digging into a fresh bowl of pasta—warm, welcome, and satisfying. A deeply felt debut that affirms the importance of friends and family—Italian-style.”—Lisa Verge Higgins, author of The Proper Care and Maintenance of Friendship

“From the streets of New York to the canals of Venice, Rosanna Chiofalo creates a warm and lively story the reader won’t want to see end. Valentina DeLuca is a heroine with intelligence, heart, and courage, the kind of person every woman wants for a dear friend. Time spent with her is a sheer joy.”—Mary Carter, author of The Pub Across The Pond

“Go to Venice. Ride a gondola. See St. Mark’s square. Chase the pigeons. Then go back to your hotel room overlooking a canal, take out Bella Fortuna, and read. It will make your whole day perfetto.”—Cathy Lamb, author of A Different Kind of Normal

she proclaims in the opening chapter of Bella Fortuna? Do you

feel that she’s been unlucky in general in life?

How is Valentina different from her mother in her beliefs of

the mighty malocchio or evil eye? How are they alike in their

beliefs of good versus bad luck?

How does Michael fit the knight-in-shining-armor stereotype

where Valentina is concerned? Do you think that is a large reason

why Valentina falls in love with him?

Do you agree with Aldo’s assessment that Valentina has put

such high expectations? Does that make it easier to forgive

Michael’s transgressions later? Do you feel that Valentina’s expectations

of Michael are unrealistic?

Discuss the concept of “forgive and forget” and the pros and

holding on to a grudge. Do you feel that Valentina is justified

in her refusal to forgive Tracy when she sees her at her shop?

Do you feel that Valentina was harsh? How might Valentina

have handled the situation with Tracy in her shop differently?

Valentina is close to her family. But we also see she has a special

relationship with her neighbors and the people in her

neighborhood. Which is your favorite neighbor and why?

Which is your least favorite neighbor and why? Do you feel

that the neighbors are an extended family for Valentina?

What are Valentina’s views on friendship with women? Do you

were in high school?

Valentina and Aldo share a very close friendship and bond.

How are they alike and/or different?

For most women, weddings are a milestone, and they want

their big day to be perfect. Do you feel that Valentina has

placed too much importance on having the perfect wedding

with Michael? Do you think Valentina is guilty of falling more

What does Valentina’s wedding dress symbolize for her? What

does the dress symbolize for her mother? Do you agree with

should drop the shorter front hem of her dress? What do you

think are his real motives in wanting a more traditional dress

Do you believe that Sonia, the teenage fortune-teller Olivia

goes to see, truly has “the power”?

engagement to Michael is broken? How does the trip hinder

her initially from moving on with her life? How does it help

How is Stefano different from Michael? Why do you think

Valentina falls for him?

After Valentina returns to New York and visits Tracy’s mother,

she learns that Tracy seems to have changed her ways. Did you

feel compassion for Tracy? Was it easier to understand her actions

toward Valentina when they were in high school?

What did you think of Valentina’s enormous gesture of giving

Tracy’s mother her wedding dress? Do you feel that her action

has truly brought her peace?

Valentina regrets not having forgiven Tracy. Do you think she

should have been more understanding toward Michael when

he reveals the secret he’d been keeping from her? Why do you

think she is not ready to forgive him? Do you think she ever

will? Do you think they can ever be friends?

How are Valentina’s wedding plans to Stefano different from

her plans for her first wedding? Do you feel that she’s grown?

wedding to Stefano? Did you like it more than the dress she

was supposed to wear to her wedding with Michael? Which

gown do you feel represented accurately who she was?

How do Valentina’s relationships with Michael and Stefano

mirror her mother’s relationships with her first love, Salvatore,

and her husband, Nicola? How much did fate play a role in

whom they fell in love with?

Olivia shares with Salvatore what Connie has told her about the

Cherokee Indians’ belief that each stage of our lives—childhood,

like a reincarnation. Do you agree with this Cherokee belief?

How has Olivia reinvented herself in every stage of her life?

of the novel? How have Valentina’s changed?