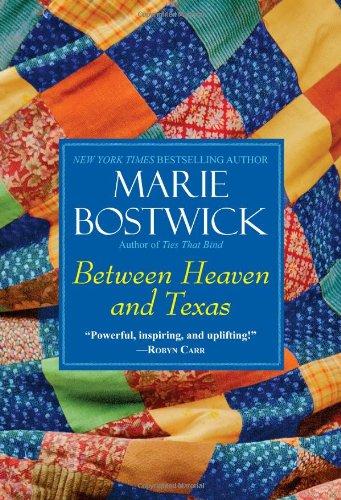 BETWEEN HEAVEN AND TEXAS

In this luminous prequel to her beloved Cobbled Court Quilts series, New York Times bestselling author Marie Bostwick takes readers into the heart of a small Texas town and the soul of a woman who discovers her destiny there…

Welcome to Too Much—where the women are strong-willed and the men are handsome yet shiftless. Ever since Mary Dell Templeton and her twin sister Lydia Dale were children, their Aunt Velvet has warned them away from local boys. But it’s well known that the females in Mary Dell’s family have two traits in common—superior sewing skills and a fatal weakness for men.

In this luminous prequel to her beloved Cobbled Court Quilts series, New York Times bestselling author Marie Bostwick takes readers into the heart of a small Texas town and the soul of a woman who discovers her destiny there…

Welcome to Too Much—where the women are strong-willed and the men are handsome yet shiftless. Ever since Mary Dell Templeton and her twin sister Lydia Dale were children, their Aunt Velvet has warned them away from local boys. But it’s well known that the females in Mary Dell’s family have two traits in common—superior sewing skills and a fatal weakness for men.

While Lydia Dale grows up petite and pretty, Mary Dell just keeps growing. Tall, smart, and sassy, she is determined to one day turn her love of sewing into a business. Meanwhile, she’ll settle for raising babies with her new husband, Donny. But that dream proves elusive too, until finally, Mary Dell gets the son she always wanted—a child as different as he is wonderful. And as Mary Dell is forced to reconsider what truly matters in her family and her marriage, she begins to piece together a life that, like the colorful quilts she creates, will prove vibrant, rich, and absolutely unforgettable…

Marie Bostwick was born and raised in the northwest. In the three decades since her marriage, Marie and her family have moved frequently, living in eight different states at eighteen different addresses, three of them in Texas. These experiences have given Marie a unique perspective that enables her to write about people from all walks of life and corners of the country with insight and authenticity. Marie currently resides in Connecticut where she enjoys writing, spending time with family, helping out at church, gardening, collecting fabric, and stitching quilts.

“Brilliant…the characters thunder with life right off the page and into your heart in this quintessential story of family, forgiveness, and nobility.  I just adored every single page!”—Dorothea Benton Frank, New York Times bestselling author

“This book wrapped around my heart with all the love, warmth, and beauty of a favorite family quilt.  I can’t stop thinking about it!  I’m in love with Mary Dell Templeton, and I’m in love with Too Much, Texas.”—Robyn Carr, #1 New York Times bestselling author

“With Texas-sized helpings of humor, charm, and sass, this tale will put you in a Lone Star state-of-mind!”—Lauren Lipton, author of Mating Rituals of the North American WASP

As the story opens, Mary Dell is only minutes away from walking down the aisle, but she is having second thoughts. Why was she so hesitant to go through with the wedding? Were her concerns legitimate, or was this just a normal case of wedding jitters? Have you been or known a bride who had second thoughts in the days or hours before a wedding ceremony? Did they or you go through with it? Or not? Whatever decision was made, did it turn out for the best? If not, why not?

As the years pass and Mary Dell is unable to carry a pregnancy to term, she considers adopting a child. However, her husband, Donny, isn’t enthusiastic about the idea. Why do you think he feels that way? Why is Mary Dell more open to the idea of adoption than her husband?

Mary Dell and her fraternal twin, Lydia Dale, were close as children. Though the sisters love each other and live in the same town, they have grown apart as they’ve grown older. What circumstances or attitudes brought that about? Have you experienced a similar situation with a sibling, family member, or friend? Were you able to resolve the problem? If so, how? Or, if you’re still feeling distant or estranged from someone with whom you were close in former days, what steps do you think you could take to heal this situation?

When Howard is born with Down syndrome, Mary Dell and Donny are understandably stunned. Within a few weeks of Howard’s birth, Donny leaves Too Much and deserts his family. While it would be easy to dismiss Donny as selfish or weak, his reasons for abandoning his family are more complex than that. What factors in Donny’s character and/or history do you think brought him to this? Why do you think Mary Dell was more able than her husband to cope with the reality of Howard’s disability? Is there such a thing as the “weaker sex”? Or do you think each sex has its own set of weaknesses or strengths, depending on the situation?

After Howard’s birth, Mary Dell’s mother, Taffy, thoughtlessly uses the “R-word” in reference to her grandson and elicits a furious response from Mary Dell. Do you think Mary Dell was right to speak to her mother so harshly? If not, how do you think she should have responded? How do you respond when someone uses cruel or cutting language to belittle or marginalize a person or group because of a disability, race, sex, or characteristics beyond their control? Do you ignore or confront? Why? If you choose to confront or have decided that you’re going to in the future, what do you think is the most effective means of doing so?

Mary Dell works hard to become better informed about Down syndrome so she can be a better mother, teacher, and advocate for Howard. At some level, most mothers become an advocate for their children. Do you think that is a good thing or a bad thing? Is advocacy a role that can get out of hand for parents? Why or why not?

After Donny leaves, Mary Dell sinks into depression. Her grandma Silky arrives on the scene, bearing desserts and advice, the latter delivered in fairly stark tones. Silky in- forms her granddaughter that upon becoming a mother, Mary Dell gave up her right to fall apart, that she has to stay strong for her child no matter what. Do you think that is true? Do you think it is fair? If you’re a mother, have you ever gone through a time when you felt you had to maintain a façade of strength for the sake of your family? If you’re a daughter, have you ever witnessed your mother doing the same?

Mary Dell is a technically skilled quilter. But she doesn’t hit her true stride in quilting until she joins forces with Lydia Dale, who has the gift for choosing fabrics that her sibling lacks. Working together, the sisters are greater than the sum of their parts. Do you have a skill or talent that was magnified when you teamed up with a friend or family member? Did working together enhance your relationship as much as your talents? Tell the group about it.

Lydia Dale and Graydon were in love once and planned to marry. However, circumstances and miscommunication got in the way of their plans. Now that circumstances have thrown them back together again, Lydia Dale and Graydon are very different people than they were previously. What has changed about them? Are those changes for the better? For the worse? What about you? Have you ever crossed paths with an old boyfriend or girlfriend after a space of years? What kinds of feelings did that bring forth? Were you regretful? Wistful? Relieved? Unable to imagine what you’d ever seen in that person? Unable to imagine how you’d let them get away?

Aunt Velvet makes much of the Tudmore family’s “Fatal Flaw,” a tendency for the women of the line to lose their normally solid good sense in the presence of a certain sort of man. For good or bad, Mary Dell and Lydia Dale fell hard for handsome cowboys. Just for fun: What kind of man makes you go weak in the knees? A cowboy? A fireman? A man in uniform? A man who knows how to fix your car? Your computer? Your dinner?

As a little girl, Mary Dell dreamed of owning her own dress shop in downtown Too Much. Her dream faded with the passage of time, almost forgotten until she stumbles upon an unexpected opportunity to resurrect it, albeit in a different form, by buying a quilt shop. How about you? Do you have a youthful dream that you’ve let fade? Or one that has never faded but that you’ve been afraid to speak of or pursue? If you feel comfortable, tell the group about it. Discuss the fears and obstacles that have impeded you; brainstorm about ways to overcome them. If you’re ready, you might even want to consider making this your day of declaration, telling the group that you’re ready to brush the dust off that deferred dream, begin working to make it come true, and asking for their support in the process.