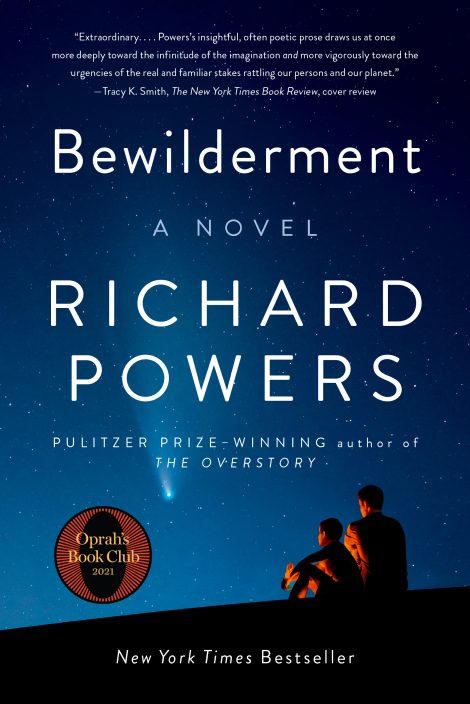 The astrobiologist Theo Byrne searches for life throughout the cosmos while single-handedly raising his unusual nine-year-old, Robin, following the death of his wife. Robin is a warm, kind boy who spends hours painting elaborate pictures of endangered animals. He’s also about to be expelled from third grade for smashing his friend in the face. As his son grows more troubled, Theo hopes to keep him off psychoactive drugs. He learns of an experimental neurofeedback treatment to bolster Robin’s emotional control, one that involves training the boy on the recorded patterns of his mother’s brain…

With its soaring descriptions of the natural world, its tantalizing vision of life beyond, and its account of a father and son’s ferocious love, Bewilderment marks Richard Powers’s most intimate and moving novel. At its heart lies the question: How can we tell our children the truth about this beautiful, imperiled planet? 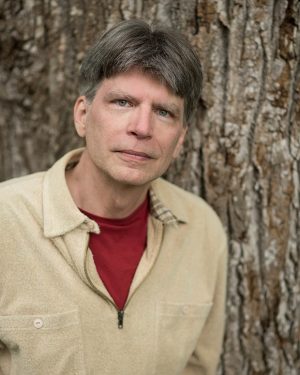 Richard Powers is the author of thirteen novels, including The Overstory and Orfeo, and the recipient of a MacArthur Fellowship, the Pulitzer Prize, and the National Book Award. He lives in the foothills of the Great Smoky Mountains.

“A heartrending tale of loss.…Powers continues to raise bold questions about the state of our world and the cumulative effects of our mistakes.” ―Heller McAlpin, NPR

“[A]stounding.…a must-read novel.…It’s urgent and profound and takes readers on a unique journey that will leave them questioning what we’re doing to the only planet we have.” –Rob Merrill, Associated Press

“[Powers] wants to challenge our innate anthropocentrism, both in literature and how we live.” –Alexandra Alter, New York Times

“Remarkable…. Bewilderment channels both the cosmic sublime and that of the vast American outdoors, resting confidently in a lineage with Thoreau and Whitman, Dillard and Kerouac.” –Rob Doyle, The Guardian

“Richard Powers is one of our country’s greatest living writers. He composes some of the most beautiful sentences I’ve ever read. I’m in awe of his talent.” –Orpah Winfrey

1. Bewilderment opens with Robin’s question about life on other planets—But we might never find them? (p. 1). How does this question apply to the novel’s concerns, extraterrestrial and otherwise? In what ways does it establish the scope of the novel’s interests?

2. “Multiply every grain of sand on Earth by the number of trees. One hundred octillion” (p. 8). This is how Theo describes the number of stars in the universe to Robin, and it’s one of many ways Richard Powers illustrates the enormity of the natural world. What are some other examples that stood out to you? Why did they have an impact?

3. When Theo and Robin encounter a bear traffic jam in the Smokies, Theo thinks, “Our species had grown so desperate for alien contact that traffic could back up for miles at the fleeting glimpse of anything smart and wild” (p. 36). How is this idea played out elsewhere in the novel? Have you ever seen a similar encounter in real life?

4. Powers frequently opens the book’s sections with Theo and Robin contemplating distant, hypothetical planets. How do these alternative worlds give shape to each section? To the novel as a whole? In what ways are the questions they pose followed through in the plot?

5. We learn the circumstances of Alyssa’s death gradually over the first half of the novel. What ambiguities does Powers introduce around the incident? Why do you think he reveals the details slowly?

6. Why does Theo resist putting Robin on prescription drugs for his behavioral issues? How do you interpret his resistance: stubborn, unrealistic, farsighted, rational? Did the end of the novel affect the way you interpret Theo’s choice?

7. Several months into Robin’s neurofeedback training, Theo worries that the treatment could be hurting his son. “In the face of the world’s basic brokenness, more empathy meant deeper suffering” (p. 138). Do you think the novel as a whole agrees or disagrees with this idea? Is the question left open?

8. There are many moments of bewilderment at the vast cosmos in the novel, but in the wake of the Asian student visa crisis on Theo’s campus, Theo expresses bewilderment about his own planet, (p. 140) and later, when the president dubiously wins reelection, Theo thinks that “only pure bewilderment kept us from civil war” (p. 238). How does the word “bewilderment” work here? How does this societal bewilderment relate to the more cosmic confusions in the book? Does the book suggest that bewilderment might sometimes be a good thing? Does the etymology of “bewilder” change our sense of how Powers uses the word?

9. Bewilderment seems to be set in a recognizable, yet slightly alternative version of the contemporary United States, with a shadow of the 2020 election looming over the latter half of the novel. In what ways does Powers’s narrative reflect recent history? In what ways does it depart? Why do you think Powers decided to keep the President nameless?

10. The neurofeedback training marks a pivotal transformation in Robin. How does the training on Aly’s Ecstasy model manifest itself in Robin? What might that say about our routes to meaning and happiness? What does this training offer that other paths to happiness in contemporary culture do not?

11. Robin’s transformation causes a shift in Theo as well. Why might Theo feel as though he’s losing his son when Robin’s condition begins to improve? How much do you think Robin is able to access from Aly’s memory? What clues does Powers offer?

12. “Given all the universe’s time and space, there seemed to be no one out there” (p. 27). This essential challenge of the Fermi paradox permeates the novel. What are some of the most convincing explanations suggested by Theo and Robin? Ultimately, do you think the novel takes a pessimistic or optimistic view of the paradox? How might your own view of existence change if you woke to tomorrow’s headlines announcing life had been discovered on another planet?

13. What do you think of Theo’s decision to read through Robin’s notebooks? What does it tell us about the challenges a parent faces when raising a child with emotional problems? In what ways does Theo’s invasion of Robin’s privacy comment on the neurofeedback training?

14. Theo repeatedly thinks of Robin and Aly as other, self-contained planets, ultimately unknowable to him. In what ways do the exploration of distant planets and another person’s mind combine? If other people are like unknowable planets, what about other animals and plants?

15. The problem of human exceptionalism and alienation from the natural world marks the novel. Robin believes that the largest problem facing humanity is that we are destroying everything that isn’t us. Is he right? Why are we so separated from the rest of creation and indifferent to its fate? What would it take for humans to change the way we think about the living world?

16. Theo’s relationship with Martin Currier is fraught throughout the novel. How has it changed by the end? Did the shift surprise you? What significance do you place on this change?

17. Near the end of the novel, Theo considers a planet that has “died of loneliness” (p. 275). What does lonely mean in the terms of this novel? Does Powers pose any effective solutions to loneliness?

18. Why do you think Powers chose to narrate this novel through Theo’s first-person perspective? Were there moments when this vantage seemed limiting? If the novel were narrated in the third person, what might have been lost?

19. Did you expect the novel to end the way it did? Is Theo’s story a completely pessimistic one, or is any hope salvaged at the end? What direction does the final section of the novel suggest Theo’s life will take?

20. On the one hand Bewilderment is a contained story of one father and son over a period of about two years. On the other hand, the novel attempts to encompass the entirety of our universe. What stylistic choices does Powers make to combine the big picture with the small? In what ways do the two scales of this story—the personal and the universal—overlap? What might Powers be trying to suggest in showing a collapse of the universal into the personal?