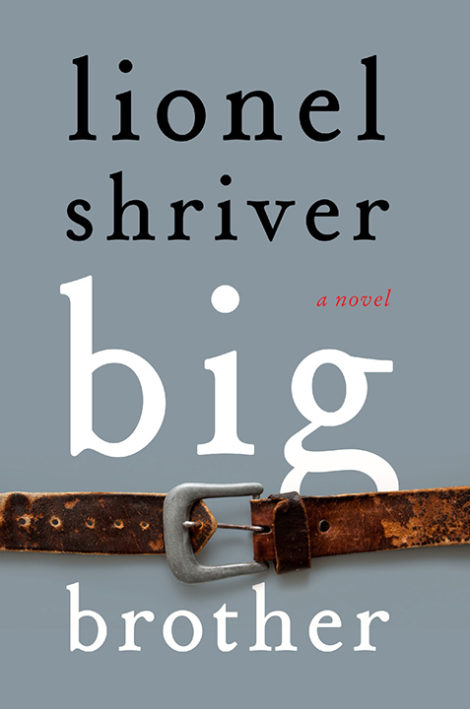 From the acclaimed author of the National Book Award finalist So Much for That and the international bestseller We Need to Talk About Kevin comes a striking new novel about siblings, marriage, and obesity.

When Pandora picks up her older brother Edison at her local Iowa airport, she literally doesn’t recognize him. In the four years since the siblings last saw each other, the once slim, hip New York jazz pianist has gained hundreds of pounds. What happened?

And it’s not just the weight. Imposing himself on Pandora’s world, Edison breaks her husband Fletcher’s handcrafted furniture,

From the acclaimed author of the National Book Award finalist So Much for That and the international bestseller We Need to Talk About Kevin comes a striking new novel about siblings, marriage, and obesity.

When Pandora picks up her older brother Edison at her local Iowa airport, she literally doesn’t recognize him. In the four years since the siblings last saw each other, the once slim, hip New York jazz pianist has gained hundreds of pounds. What happened?

And it’s not just the weight. Imposing himself on Pandora’s world, Edison breaks her husband Fletcher’s handcrafted furniture, makes overkill breakfasts for the family, and entices her stepson not only to forgo college but to drop out of high school.

After the brother-in-law has more than overstayed his welcome, Fletcher delivers his wife an ultimatum: It’s him or me. Putting her marriage and adopted family on the line, Pandora chooses her brother—who, without her support in losing weight, will surely eat himself into an early grave.

Rich with Shriver’s distinctive wit and ferocious energy, Big Brother is about fat—an issue both social and excruciatingly personal. It asks just how much we’ll sacrifice to rescue single members of our families, and whether it’s ever possible to save loved ones from themselves.

Lionel Shriver is a novelist whose previous books include Orange Prize–winner We Need to Talk About Kevin, The Post-Birthday World, A Perfectly Good Family, Game Control, Double Fault, The Female of the Species, Checker and the Derailleurs, and Ordinary Decent Criminals. She is widely published as a journalist, writing features, columns, op-eds, and book reviews for the Guardian, the New York Times, the Wall Street Journal, the Financial Times, the Economist, Marie Claire, and many other publications. She is frequently interviewed on television, radio, and in print media. She lives in London and Brooklyn, NY.

“As a writer, Shriver’s talents are many: She’s especially skilled at playing with readers’s reflexes for sympathy and revulsion, never letting us get too comfortable with whatever firm understanding we think we have of a character.”—Washington Post

“The moving (and shocking) finale will have you thinking about the ‘byzantine emotional mathematics’ we all put ourselves through when overwhelmed with family responsibilities.”—Oprah.com

“(A) delicious, highly readable novel . . . (which) raises challenging questions about how much a loving person can give to another without sacrificing his or her own well-being.”—People, People Pick (4 Stars)

At the beginning of the novel, Pandora says, “I am white rice.” Food has often been used to describe character, often in derogatory ways: “Twinkie,” “Oreo,” “Cracker”, “White bread,” etc. Does what we eat say something about who we are? Going beyond pure sustenance, why is food often so central to our lives? Pandora sees herself as having, “always existed to set off more exciting fare. I was a foil as a girl. I am a foil now.” Why does Pandora believe this about herself? Is it true? What—or rather who—is the more exciting fare that she is talking about? How do you see Pandora?

What was it like for Pandora and her brother Edison to grow up in Hollywood as the daughter of a television star like Travis Appaloosa? Did they like their childhood? How did being the children of a celebrity shape their outlooks on life? Did it contribute to their success or the lack of it?

Talk about Pandora’s marriage to Fletcher and their family life. Are they happy? Is theirs a good marriage? What is your opinion of Fletcher? Why do he and Edison not get along—what is it about each other that makes them opponents in a battle for Pandora? Are Fletcher and Edison very different, or more similar than they’d like to admit? Does it make any sense that these two men would fight over Pandora, when a sibling relationship is not romantic, and you should easily be able to have a husband and a brother?

Pandora is shocked when she sees her brother for the first time in several years. Why? Why did Edison become morbidly obese? Do you think everyone who is overweight is self-destructive?

Just as he’s about to return to his life in New York, Pandora decides to move in with Edison to help him lose weight. Do you agree with her plan? Given the circumstances, is this the best solution for her brother? How does Fletcher react when she tells him? Why isn’t her husband more supportive? What if it were an elderly parent instead of a brother who needed her? Is it odd for adult siblings to be as close as she and Edison are?

She and Edison go on a liquid protein diet. Is this plan realistic for someone as overweight as Edison? How did moving in with her brother affect Pandora’s life and her relationships with her husband and her stepchildren?

Where you surprised at the twist that comes late in the book? Why do you think the author wrote the story this way? What other endings might she have written? How did it influence your view of the characters? Did you feel cheated, or did feel you still got to keep the story in “Down,” as well as getting to read a shorter, sadder one in “Out”? Should Pandora have done more for Edison? How much do we owe to the people we love? Do we have a responsibility to help those we care about? How do you define that responsibility—and where does it stop? How far would you go to help a loved one?

Which of the characters in the novel do you most sympathize with? Do you feel sorry for Edison or does he make you angry? Are all of them victims in some way of food? Do you think Pandora ultimately breaks free of that victimization?

How do the teenage children react to Edison? Do you think they will become adults with eating/food issues? What are they learning from the adults in their lives?

Big Brother is set in Iowa, with references to Hollywood and New York. Why do you think the author chose Middle America as her setting? Why has obesity become such a problem in our country? Do you think getting fat is just about willpower? What about the ingredients in processed foods and marketing jumbo size portions? How much does American industry have a role in both creating and increasing this problem? Why is food and weight so central to our culture, not only in the media but in how we think about ourselves and who we are? Can we change this—recalibrate our relationship to eating and food?

In addition to our cultural obsession with weight, Lionel Shriver also explores our fascination with celebrity. How do the two influence and impact each other? Why are so many movie stars so thin? Can you be too thin? How do you interpret Pandora’s assertion about both food and career success, “We are meant to be hungry”?

Think about Fletcher. He deprives himself of his wife’s amazing cooking, eventually spurning even the tiny taster plates she leaves out for him. Why can’t he enjoy the smallest of indulgences? Is Pandora justified in taking her husband’s turning up his nose at her cooking as a personal rejection? How does Fletcher use his impeccably healthy diet and fitness regime in their relationship?

How do you feel about your own weight? If you’d like to be thinner—as it seems so many people do—is that for health reasons, or do you simply think you’d be more attractive? Is it possible your size is too important to you? Don’t some of us make ourselves miserable over just a few extra pounds? After all, what do other people value about you—what you look like? Or are your friends more apt to treasure your generosity, your wisdom, your sense of humor?

How does overeating differ from other addictions—to alcohol or to drugs? Is obesity the sign of a character failing? Why does it still seem OK to make jokes about fat people when we now frown on, say, making fun of people for being gay?

What made you or your group choose Big Brother? How did reading the story compare to your expectations? What did you take away from reading Big Brother?