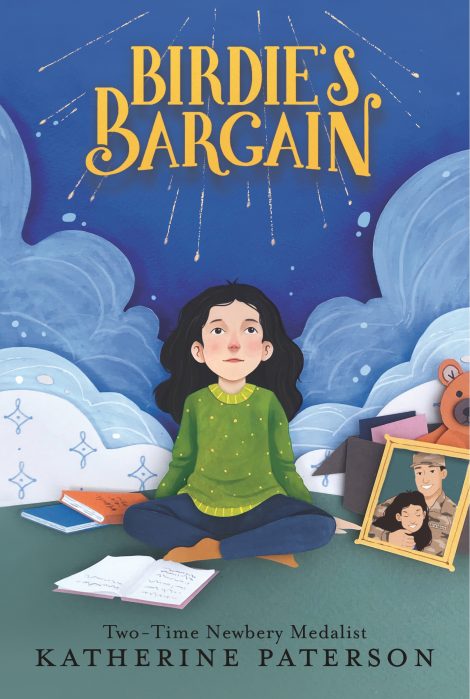 Birdie has questions for God. For starters, why couldn’t God roll history back to September 10, 2001, and fix things—so the next day was an ordinary sunny day and not the devastating lead-in to two wars? Daddy has already been to Iraq twice. Now he’s going again, and Birdie is sure he’ll die. At the very least, she won’t see him again for a year, and everything will not be OK. (Why do grown-ups lie?) To save money, she, Mom, and baby Billy have moved to Gran’s, where shy Birdie must attend a new school, and no one but bossy Alicia Marie Suggs welcomes her.

Birdie has questions for God. For starters, why couldn’t God roll history back to September 10, 2001, and fix things—so the next day was an ordinary sunny day and not the devastating lead-in to two wars? Daddy has already been to Iraq twice. Now he’s going again, and Birdie is sure he’ll die. At the very least, she won’t see him again for a year, and everything will not be OK. (Why do grown-ups lie?) To save money, she, Mom, and baby Billy have moved to Gran’s, where shy Birdie must attend a new school, and no one but bossy Alicia Marie Suggs welcomes her. Doesn’t God remember how hard it was for Birdie to make friends at Bible Camp? Counselor Ron taught about Judgment there—and the right way to believe. Has Birdie been praying wrong? Why else would God break their bargain? Readers of all faiths and backgrounds, especially children of military families, will identify with and root for the unforgettable Birdie, given inimitable voice by a master storyteller.

In a poignant and unflinching new realistic novel from the Newbery Medal–winning author of Bridge to Terabithia, a ten-year-old girl makes a deal with God for her father’s safe return from the Iraq War. 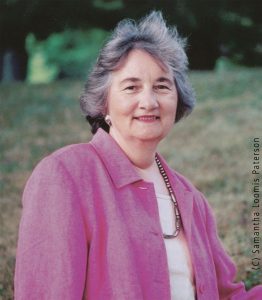 Katherine Paterson, a two-time winner of the Newbery Medal and the National Book Award, has written more than thirty books, including Bridge to Terabithia and My Brigadista Year. A recipient of the Hans Christian Andersen Award, the Astrid Lindgren Memorial Award, and the Laura Ingalls Wilder Award, and a former National Ambassador for Young People’s Literature, she lives in Montpelier, Vermont.

“As her protagonist copes first with the move and then with her crisis of faith, Paterson rounds the story with specific physical details (as well as skillfully deploying an omniscient narrator) and depicts the character’s emotional arc with authenticity and empathy.”-The Horn Book

The Time of No Goodbyes

It wasn’t until the volunteers from the Lions Club had left and they stood in the empty apartment looking at nothing that Birdie realized her bicycle was gone. The sofa, the kitchen table and chairs, all the beds—even the TV—had been carried to the truck. Daddy had finished stuffing the trunk of the Subaru and the tiny U-Haul trailer with all the boxes and baby furniture when she thought of it.

“Mom! Those guys stole my bike!”

“Oh, Birdie. No one stole your bike.”

“Then where is it? Daddy didn’t put it in the car or in the U-Haul. You gotta call them. Tell them to bring it back! Now!”

“We can’t do that, sweetie.” Mom sighed. She’d been doing a lot of sighing lately, and it wasn’t her style. “I’m sorry. I should have told you, but it’s been hard to think straight, and they were so thrilled to get a bike. They said bikes always do well in their summer sale.”

“There was just no room, either in the car or the U-Haul . . . Did you know everything they make from the sale goes to help blind people?”

As if that would make it okay.

“It was really too small for you,” Daddy chimed in. “We need to get you a new one, a regular-size one.” He studied Birdie’s grim expression. “I promise.”

“As soon as we can afford it,” Mom said. Like never.

It was downhill from there. Birdie hardly spoke in the car on the way north even though Daddy was sitting in the back seat, too. The passenger-side front seat was piled to the roof with stuff, which meant that some grown-up had to sit in back. “Your mom’s the better driver,” he said as he climbed in with Birdie and Billy.

She was sure that before Billy was born, Daddy used to drive a lot, and he never sat in the back even when he wasn’t driving. She should have been happy he was in the back, but Baby Billy’s car seat was plunk in the middle—right between them—and even if she felt like talking, which she certainly did not at the moment, how could she talk to Daddy across the stomach of a six-month-old baby who cried a lot and wouldn’t even go to sleep in a moving car?

It was a known fact that every normal baby in the world just naturally passed out as soon as a car was shifted into drive and began to move. “I think something must be wrong with your brother,” Melanie had said when Birdie complained to her friends that Billy never slept in the car.

During the whole week that Mom and Daddy and Gran tried to settle the family into their new quarters, Birdie watched soap operas. She hated the place, hardly bigger than a closet, that was supposed to be her new bedroom. She spent her days in the living room watching TV. They should have yelled at her for being lazy and selfish. They didn’t even fuss at her for watching daytime soaps.

They just didn’t care. Didn’t they remember how they used to fuss about children turning into ignorant couch potatoes? Maybe she needed to scream like Billy so they’d come running. But seriously . . .

On Monday Mom had gone to the local Dollar Store and applied for a job. Daddy said she should take her time, try to find a better job, but she shook him off. They were hiring at the Dollar Store. She was sure she could get a job there. If she hated it, she’d try to find something else. Right now, they needed the money. She promised not to start before he left. No one suggested that Birdie start school before then.

They wanted as much time with Daddy as possible. But Birdie had pretty much ruined that, hadn’t she? Moping around and pretending to feel sick for most of the week. Even Wednesday night, when Gran took them all out for maple creamies, Birdie had pouted. Chocolate was her favorite, not maple. Couldn’t they bother to remember that?

Then the terrible last morning arrived. Mom came to wake her up, but Birdie just burrowed under the pillow and pretended to be asleep.

“Come on, sweetie. Get up.” Birdie didn’t move. “Birdie, please. We’re not going to see Daddy for a year. Even if you don’t want to go to the airport, at least get up and say goodbye.”

“I can’t.” Her voice was muffled by the thick duckfeather pillow, to which she was probably allergic, but who would care? “I feel awful. I might give him something.”

“Oh, Birdie,” Mom said in her don’t-be-ridiculous tone of voice. She stood in the doorway for a moment or two, then, sighing loudly enough for Birdie to hear it through the feathers, she left. Birdie listened to the click of her boot heels as she walked the short distance to the kitchen.

Birdie thought she could hear a whispered conversation, and then there was the sound of her father’s heavier step. “Birdie.” He said it quietly because he had walked right to the side of her bed. “I’ve got to go now, okay?”

What a stupid thing to say. It was not okay. It would never be okay.

“I want you to help your mom and Gran while I’m gone. No kidding, slugger. I really need you to step up to the plate.” Why did he say that? She hated baseball.

When she didn’t answer, didn’t even turn to look at him, he bent down, gently pulled the pillow off her head, and kissed her ear. “I’ll miss you, baby,” he said. And was gone.

The closing of the heavy front door made Birdie sit up straight. She put her hand right on the heart of her Jesus T-shirt. What was the matter with her? How could she let her daddy go to war without even a real goodbye? Jesus would never do that. Being scared that someone would die was not an excuse. At Bible Camp, Reverend Colston had told them that Jesus gave his friends a long, beautiful goodbye message the night before he died.

She jumped out of bed, stuck her feet into her bunny slippers, and raced out of the house . . . just in time to see the old Subaru swing around the corner. She was too late.

When she turned, still bawling, to go back to the house, Gran met her holding out her jacket.

Without a word, Birdie shrugged on her old Salvation Army Store jacket. She couldn’t talk. She’d already said too many wrong words before she even got out of bed this morning.

Birdie went back into the empty old house, went to her tiny room, pulled off her jacket, and got into bed. Once again, she pulled the pillow over her head. There was nothing else to do. She lay there trying not to think, but the view of the disappearing car kept rattling around in her head. Mom was driving him to Essex Junction, where the guard was gathering for the ceremony. Then the soldiers would get on the buses to the airport, from where they’d fly to some base and on to Iraq, where they’d all die.

She grabbed the pillow with both hands and smashed it down harder against her face. She would never see her daddy again. She didn’t cry. She was too scared and mad to cry, but the pillow kept her from screaming out loud.