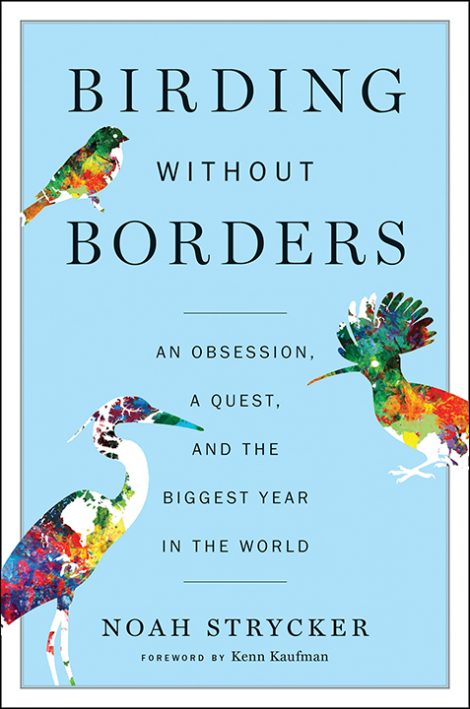 An Obsession, a Quest, and the Biggest Year in the World

Traveling to 41 countries in 2015 with a backpack and binoculars, Noah Strycker became the first person to see more than half the world’s 10,000 species of birds in one year.

In 2015, Noah Strycker set himself a lofty goal: to become the first person to see half the world’s birds in one year. For 365 days, with a backpack, binoculars, and a series of one-way tickets, he traveled across forty-one countries and all seven continents, eventually spotting 6,042 species—by far the biggest birding year on record.

This is no travelogue or glorified checklist. Noah ventures deep into a world of blood-sucking leeches,

Traveling to 41 countries in 2015 with a backpack and binoculars, Noah Strycker became the first person to see more than half the world’s 10,000 species of birds in one year.

In 2015, Noah Strycker set himself a lofty goal: to become the first person to see half the world’s birds in one year. For 365 days, with a backpack, binoculars, and a series of one-way tickets, he traveled across forty-one countries and all seven continents, eventually spotting 6,042 species—by far the biggest birding year on record.

This is no travelogue or glorified checklist. Noah ventures deep into a world of blood-sucking leeches, chronic sleep deprivation, airline snafus, breakdowns, mudslides, floods, war zones, ecologic devastation, conservation triumphs, common and iconic species, and scores of passionate bird lovers around the globe. By pursuing the freest creatures on the planet, Noah gains a unique perspective on the world they share with us—and offers a hopeful message that even as many birds face an uncertain future, more people than ever are working to protect them. 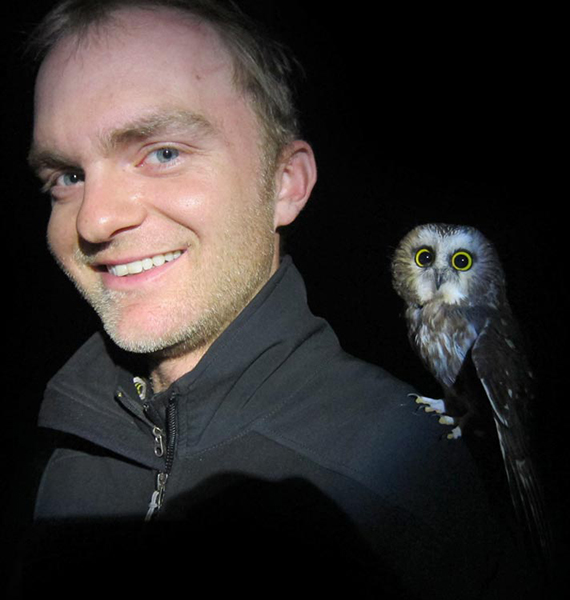 Noah Strycker is associate editor of Birding magazine and the author of several books. He has studied birds worldwide, and works as a guide on expedition cruises to Antarctica and the Arctic, spreading the inspiration of birds from pole to pole.

“Even readers who wouldn’t know a marvellous spatuletail from a southern ground hornbill will be awed by Strycker’s achievement and appreciate the passion with which he pursues his interest.“—Publishers Weekly

“Strycker’s description of a year ‘expanded to its maximum potential’ will inspire readers to explore the world, ‘from the tiniest detail to the biggest panorama.’ . . . Colorful but unassuming—and unexpected—lessons for living life fully, presented from a birder’s-eye view.”—Kirkus Reviews, starred review

“Every generation has a few naturalist-writers who have a spirit as unlimited as their talent—that’s Noah Strycker. The sheer demographics of his travels are mind boggling; he stretches life to the limits, and he has an ability to describe incidents of travel, landscapes, and people with splendid and self-deprecating intimacy. This book goes to the top of my life-list.”—Howard Norman, author of My Darling Detective

1 End of the World

On New Year’s Day, superstitious birdwatchers like to say, the very first bird you see is an omen for the future. This is a twist on the traditional Chinese zodiac ? —  ?which assigns each year to an animal, like the Year of the Dragon, or Rat ? —  ?and it’s amazingly reliable. One year, I woke up on January 1, glanced outside, and saw a Black-capped Chickadee, a nice, friendly creature that everybody likes. That was a fantastic year. The next New Year, my first bird was a European Starling, a despised North American invader that poops on parked cars and habitually kills baby bluebirds just because it can. Compared to the Year of the Chickadee, the Year of the Starling was pretty much a write-off.

So it was with some anxiety that on January 1, 2015, I looked around to see which bird would set the tone for the next 365 days. I already knew this would be no ordinary year: I’d just quit my only regular job, broken up with my girlfriend, spent most of my savings, and then, cramming all my possessions into a small backpack, made my way literally to the end of the Earth. Now, at the stroke of midnight, on top of a Russian ship in the frozen reaches of Antarctica, with a bottle of champagne in both hands and binoculars dangling around my neck, I was in a hot tub with a Scottish historian, a penguin researcher, and a geologist. What bird could possibly tell where all of this was heading?

With any luck, it would be a penguin. I’d gone to great lengths to engineer this New Year celebration just so that, right after the obligatory countdown and toast, 2015 could be declared the Year of the Penguin ? —  ?which, karmically speaking, couldn’t possibly go wrong. In the previous week, I’d spent a lonely Christmas night on the floor of the Los Angeles airport, traveled from the United States to the southern tip of Argentina, caught this ship, sailed across the tumultuous Drake Passage, and positioned myself for this moment, this pivotal moment when fate would set in motion the biggest year of my life, and possibly of international birdwatching history.

The goal was simple: in the next twelve months, I hoped to see 5,000 species of birds ? —  ?about half the birds on Earth ? —  ?in the ultimate round-the-world journey. After leaving Antarctica, I’d spend the next four months in South America, then migrate north through Central America, the Caribbean, and Mexico, reaching the United States in May. If things went well, I’d fly over to Europe, do a big U-turn through Africa, bounce around the Middle East, zigzag across most of Asia, and island-hop Down Under to ring in the following New Year. While the Earth completed one full orbit of the sun, I would visit forty countries with no days off. Nobody had ever attempted such a trip, and bird-brained experts argued about whether it was even possible to spot 5,000 species in one calendar year. By the end, the journey would surpass even my own wildest dreams. But for now, all I knew was that the clock started ticking at midnight.

The world’s most frequent fliers don’t have platinum status, free upgrades, or even passports. Every hour, millions of these undocumented immigrants pour across major political borders, and nobody thinks of building walls to keep them out. It would be impossible to anyway. Birds are true global citizens, free to come and go as they please.

A few years ago, two British scientists tackled the question of how many individual birds are living on Earth ? —  ?a sort of global avian census ? —  ?and calculated that, at any given moment, between 200 and 400 billion feathered friends share this planet with us. That works out to something like forty birds for every human, spread from here to Timbuktu. Birds occupy almost every conceivable niche of our world, from the wild Amazon in South America to the heart of the Bronx in New York City. Even places that seem lifeless lie within their reach: intrepid birds have been recorded at the South Pole, winging over the summit of Mount Everest, and soaring across the open ocean hundreds of miles from land. As of 2015, 10,365 bird species had been identified on planet Earth, a number that only begins to hint at their sheer diversity. The smallest, the Bee Hummingbird of Cuba, could perch comfortably on the toenail of the largest, the Ostrich.

Birding is a state of mind more than anything else, which makes it hard to define. Roger Tory Peterson, generally considered the father of modern birdwatching, once observed that birds are many things to many people: a science, an art, a sport. They can even, as Peterson’s friend James Fisher added with a wink, “be a bore, if you are a bore.” It’s a tough activity to pigeonhole, though many have tried; birding is hunting, collecting, and gambling rolled into one. Nobody can decide whether birdwatching constitutes an addiction, a release, or just a game played by khaki-clad eco-nerds.

My own interest in birds was sparked innocently enough at the age of ten, when my fifth-grade teacher suction-cupped a clear plastic bird feeder to our classroom window. That same year, my dad helped me build bluebird houses and took me to a birdwatching festival in eastern Oregon. Pretty soon I was dragging home rotting deer carcasses to attract and photograph Turkey Vultures, then deferring college to go study bird nests in Panama, then eschewing a nine-to-five job entirely, introducing myself as a “bird man” whenever anyone asked.

From the beginning, the pursuit gave me a sense of purpose. By watching the skies, I began to see the world in different and unfamiliar ways, letting curiosity lead me to new places. By my mid-twenties, I’d spent more than a year and a half occupying tents in various remote corners of the world, in between avian research projects and expeditions, and accepted that there was no going back. I also had a growing, slightly uneasy sense that even if I kept it up for the rest of my life, there were just too many birds and too little time.

The feeling of urgency seems to be everywhere. Psychologists call it FOMO (Fear Of Missing Out), conservationists call it habitat loss, and Hollywood directors call it The Apocalypse. In terms of connecting with the outdoors, we live at an interesting moment. A hundred years ago, people watched birds in hopes of finding new species, but the golden age of ornithological discovery has mostly passed; virtually all birds are now thoroughly, scientifically described, and tucked away as musty specimens in museum collections. Today, people are drawn to birding for the exact opposite reason: to rediscover and celebrate nature at a time when significant chunks of society rarely venture outdoors. It’s poignant that, just as record numbers of people are paying attention, the birds themselves have never faced a more uncertain future. This planet is being cleared, flattened, tilled, drilled, paved, and developed at an unprecedented rate. What that means for birds, humans, and the rest of the world is unclear.