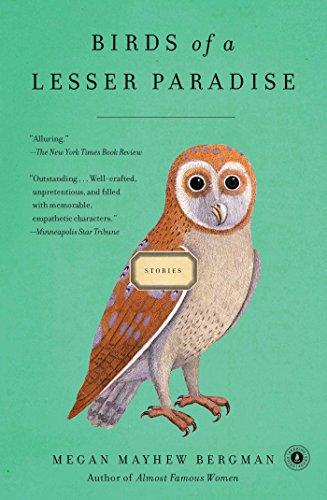 BIRDS OF A LESSER PARADISE

Megan Mayhew Bergman’s Birds of a Lesser Paradise captures the surprising moments when the pull of our biology becomes evident, when love collides with good sense, and when our attachments to an animal or wild place can’t be denied. In “Housewifely Arts,” a single mother and her son drive hours to track down an African Gray Parrot that can mimic her dead mother’s voice. A population control activist faces the ultimate conflict between loyalty to the environment and maternal desire in “Yesterday’s Whales.” And in the title story, a lonely naturalist allows an attractive stranger to lead her and her aging father on a hunt for an elusive woodpecker.

Megan Mayhew Bergman’s Birds of a Lesser Paradise captures the surprising moments when the pull of our biology becomes evident, when love collides with good sense, and when our attachments to an animal or wild place can’t be denied. In “Housewifely Arts,” a single mother and her son drive hours to track down an African Gray Parrot that can mimic her dead mother’s voice. A population control activist faces the ultimate conflict between loyalty to the environment and maternal desire in “Yesterday’s Whales.” And in the title story, a lonely naturalist allows an attractive stranger to lead her and her aging father on a hunt for an elusive woodpecker. As intelligent as they are moving, the stories in Birds of a Lesser Paradise are alive with emotion, wit, and insight into the impressive power that nature has over all of us.

Megan Mayhew Bergman grew up in Rocky Mount, North Carolina and attended Wake Forest University. She has graduate degrees from Duke University and Bennington College. Her stories have appeared in the 2010 New Stories from the South anthology, Ploughshares, Oxford American, One Story, Narrative, PEN American, The Kenyon Review, Shenandoah, Gulf Coast, Greensboro Review and elsewhere. She lives in on a small farm in Shaftsbury, VT with her veterinarian husband, two daughters, four dogs, four cats, a horse, goats, and chickens.

“Birds of a Lesser Paradise is an astonishing debut collection, by a writer reminiscent of such greats as Alice Munro, Elizabeth Strout and even Chekhov. Expertly delivered, Bergman’s stories bloom from the minutiae of life. They confirm the inescapable power that nature–and our own biology–has over us.”—Sara Gruen, author of Water for Elephants

“Megan Mayhew Bergman apparently possesses, all in one sensibility, Ralph Waldo Emerson’s love of a back-to-the-land self-sufficiency, Amy Hempel’s infinite tenderness towards animals, and Tillie Olsen’s fierce sense of the emotional intensities of motherhood. Birds of a Lesser Paradise features characters who, even understanding it as well as they do, want to mother the world, and their stories are rendered with dazzling compassion, intelligence, and grace.”—Jim Shepard, author of You Think That’s Bad

“A big-hearted collection of stories–each one a precise and compassionate study of human life, the changes and obstacles–all carefully housed under the miracles and marvels of nature. Megan Mayhew Bergman is a brilliantly gifted writer who recognizes and highlights life’s fragilities in a way that will leave your heart aching while also finding those bits of hilarity and absurdity that bring uniqueness to each and every creature.”—Jill McCorkle, author of Going Away Shoes

“I predict that astronomers will soon be renaming the star Sirius to Megan Mayhew Bergman. Birds of a Lesser Paradise offers us a spectacular new voice in the world of American short fiction. The characters in these stories–each one–perform as beacons on who we are and how we should act, all without pretense or exhortation. This is a first-rate collection.”—George Singleton, author of The Half-Mammals of Dixie

How much of a role does nature play in the lives of the heroines of Mayhew Bergman’s stories? How do their relationships with the natural world affect their decisions?

Whether it is an African Gray parrot or a lemur, animals are central to each of these stories. How do the characters identify with or distinguish themselves from animals? Do any of the characters share certain qualities with the animals described?

In “Housewifely Arts,” what did her mother’s parrot represent to the narrator while her mother was still alive? How did the parrot’s importance change after her mother passed away?

How did you react to the veterinarian husband in “The Cow That Milked Herself” examining his pregnant wife in the same way he examines animals? Do you think his clinical take on his wife’s pregnancy reveals any universal truths about motherhood?

Lila feels ugly and damaged after her face is disfigured in “Saving Face,” and goes to great lengths to isolate herself. How do you think her experience with Romulus and the sickly calf will change her? Can she reclaim the person who she was, despite her new challenges?

Lauren, the population control activist in “Yesterday’s Whales,” has a crisis of faith when she becomes pregnant. Have you ever experienced an event that’s challenged your long-held convictions? Is there any way to reconcile two wildly different points of view?

Do you think the narrator of “Another Story She Won’t Believe” realizes the mess she’s made? What do you think propelled her to self-destruct? Do you think her treatment of the lemurs represents an insurmountable character flaw?

What does it take to forgive yourself after an act of negligence? What kind of mother do you think the narrator of “The Urban Coop” will turn out to be, if she can become pregnant?

“My mother once told me: Never underestimate avoidance as an effective coping mechanism,” says the narrator of “The Right Company” (146). Is her retreat to the small Southern town of Abbet’s Cove an effective way to deal with the collapse of her marriage? When she tries to free Mussolini’s dog, the animal refuses to make an escape. What does this juxtaposition say about the narrator’s circumstances?

In “Night Hunting,” a young girl must come to terms with her mother’s declining health. How does her walk through the cold Vermont night force her to confront her fears? Do the ever-threatening coyotes represent a more primal danger than her mother’s cancer?

Could a hunter and an animal lover ever have a functional relationship? Do you think the woman in “Every Vein a Tooth” uses her relationship with animals to avoid the messiness of human intimacy? Or does her extreme devotion to the animals she rescues come from a purer, more optimistic place?

“The Artificial Heart” is the only story in Birds of a Lesser Paradise that’s set in the future. How do you think it fits in with the rest of the stories in the collection? Do you think it’s a natural impulse to want to prolong life, even if the quality of that life becomes less than ideal? Or do we become lesser versions of ourselves if we try to cheat death?

The narrator of “The Two-Thousand Dollar Sock” is a fighter, as is her husband, and ultimately her dog, Vito, who attacks a bear to protect the family. Do you think humans have a similar compulsion to fight and defend?