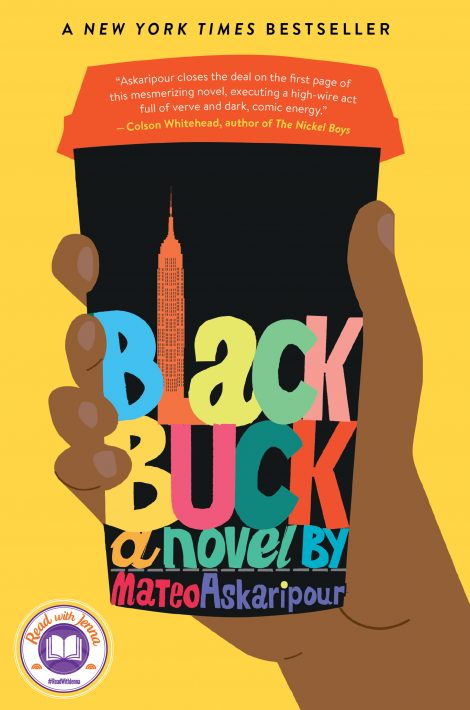 An unambitious twenty-two-year-old, Darren lives in a Bed-Stuy brownstone with his mother, who wants nothing more than to see him live up to his potential as the valedictorian of Bronx Science. But Darren is content working at Starbucks in the lobby of a Midtown office building,

An unambitious twenty-two-year-old, Darren lives in a Bed-Stuy brownstone with his mother, who wants nothing more than to see him live up to his potential as the valedictorian of Bronx Science. But Darren is content working at Starbucks in the lobby of a Midtown office building, hanging out with his girlfriend, Soraya, and eating his mother’s home-cooked meals. All that changes when a chance encounter with Rhett Daniels, the silver-tongued CEO of Sumwun, NYC’s hottest tech startup, results in an exclusive invitation for Darren to join an elite sales team on the thirty-sixth floor.

After enduring a “hell week” of training, Darren, the only Black person in the company, reimagines himself as “Buck,” a ruthless salesman unrecognizable to his friends and family. But when things turn tragic at home and Buck feels he’s hit rock bottom, he begins to hatch a plan to help young people of color infiltrate America’s sales force, setting off a chain of events that forever changes the game.

Black Buck is a hilarious, razor-sharp skewering of America’s workforce; it is a propulsive, crackling debut that explores ambition and race, and makes way for a necessary new vision of the American dream.

MATEO ASKARIPOUR’s work aims to empower people of color to seize opportunities for advancement, no matter the obstacle. He was chosen as one of Entertainment Weekly‘s “10 rising stars to make waves in 2021,” a 2018 Rhode Island Writers Colony writer-in-residence, and his writing has appeared in the New York Times, Entrepreneur, Lit Hub, and elsewhere. His debut novel BLACK BUCK was an instant New York Times bestseller and a Today Show Read With Jenna book club pick. He lives in Brooklyn. Follow him on Instagram and Twitter at @AskMateo.

A New York Times Bestseller
A Read with Jenna Today Show Book Club Pick!
One of Marie Claire’s “29 Best New 2021 Books”
One of PopSugar’s “Books Everyone Will Be Talking About in 2021”

“Askaripour closes the deal on the first page of this mesmerizing novel, executing a high wire act full of verve and dark, comic energy.” —Colson Whitehead, author of The Nickel Boys

“A hilarious, gleaming satire as radiant as its author. Askaripour has announced himself as a major talent of the school of Ralph Ellison, Paul Beatty, Fran Ross, and Ishmael Reed. Full of quick pacing, frenetic energy, absurd—yet spot on—twists and turns, and some of the funniest similes I’ve ever read, this novel is both balm and bomb.” —Nafissa Thompson-Spires, author of Heads of the Colored People

“I fell in love with this book and Buck from the first page. Mateo has not only authentically captured the feeling of being seen as ‘other,’ but he’s also managed to delicately show the way in which so many people protect themselves by creating an alter ego out of self-preservation. Buck’s journey is filled with heartache, laughter, fear, success, and karma.”  —Jay Ellis, actor, director, producer

“Black Buck is a madcap look at compromises Black people make while trying to get ahead. When are you code-switching, and when is the code switching you? Mateo Askaripour didn’t write a novel, he crafted a business book forged in the abyss as it stares back. It’s a world that looks an awful lot like the hell we’re in.”  —Rion Amilcar Scott, author of The World Doesn’t Require You

“When Darren, our protagonist, is offered the opportunity of a lifetime, this unforgettable story sets off at light speed. Combining such humor, intelligence, heartbreak, and narrative skill in one book takes immense talent. Mateo Askaripour has accomplished this task with room to spare. Black Buck is an important treatise on Black ambition; Mateo Askaripour is an important writer, a voice we need. We should all look forward to what he produces next.”—Gabriel Bump, author of Everywhere You Don’t Belong

“Black Buck is funny, sharp, and carried by a voice that is entirely its own. This debut is ambitious and Askaripour’s daring pays off beautifully.”—Nana Kwame Adjei-Brenyah, author of Friday Black

“A first novel that satirically lays out the wretched excesses of turn-of-the-twenty-first-century capitalism as it both enriches and disfigures a bright young Black man’s coming-of-age . . . jazzily discursive and rhythmically propulsive . . . with punchy, go-for-broke mother-wit.”—Kirkus Reviews

1. Before you read Black Buck, how did you define a salesperson? Now that you’ve read the book, how has your definition changed? If so, how?

2. Discuss the author’s note at the beginning of the novel and the tips addressed to the reader throughout. What do you make of Buck’s advice? And why do you think Askaripour chose to structure the novel this way—almost like a business memoir or sales manual?

3. When Darren reverse closes Rhett at Starbucks, everything changes (pages 13–14). What does Rhett see in Darren in that moment? Why is Darren reluctant to accept Rhett’s job offer to work at Sumwun? Have you ever been afraid to pursue a new opportunity in your own life?

4. Discuss Darren’s relationship to Ma, Soraya, and the “gargoyles” (Jason and Wally Cat) and how those relationships change when Darren begins working at Sumwun. How does his professional success impact his closest relationships? Have you seen anything similar happen to yourself, friends, or loved ones?

5. What is the culture like at Sumwun? What are the various rituals and hierarchies? Discuss the way Darren (“Buck”) is treated compared to his colleagues as well as the ways people at the top, like Rhett and Clyde, engage with race.

6. [Spoiler] How does Darren recalibrate after Ma dies? What harm does he cause to himself and others?

7. Discuss the media’s relationship to Darren—from his first TV appearance on Rise and Shine, America to Bonnie Sauren’s coverage of him. What are the narratives they create for him, and how does he fight back?

8. In interviews, Askaripour has mentioned that he didn’t set out to write a satire; in fact, it took him a little while to get on board with the idea that his novel could be, at once, earnest and satirical. Discuss what this means. In what ways is this novel satirical? In what ways is it earnest?

9. Discuss the origins of the Happy Campers and its quick success. What does Brian offer Darren, and vice versa? What did you make of the lessons that Darren put his early members through—from the subway car entertainment to the dine and dash? What, if anything, did these scenarios teach Brian, Rose, and the rest of the crew?

11. “The turns in this story are half absurd, half jaw-dropping, and a whole heaping of crazy” (page 305). What did you make of the big reveal that opens Part V? Did you see it coming, or was it a surprise?

12. [Spoiler] Darren hurt many people in his life, especially Mr. Rawlings, whom he never had the opportunity to apologize to. What do you think of the measures his grandson, Trey, took to exact revenge on Darren? Did Darren deserve it?

13. Discuss your feelings toward Darren, and how they might have changed, over the course of the novel. Despite his worst actions, do you think he’s ultimately redeemed?